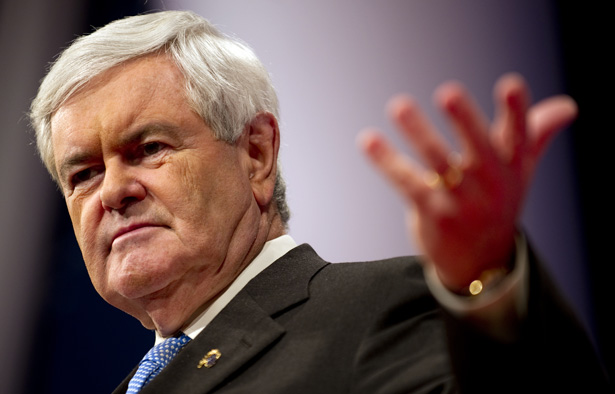 For conservatives like Gingrich, the solution is not to demand good-paying jobs, but to offer moral tutelage to poor children by getting rid of "truly stupid" child labor laws and unionized workers.

Newt Gingrich’s recent utterances about poor children–they “have no habits of working and have nobody around them who works”–reflect not only the inability of conservatives to talk seriously about poverty, but a mean-spiritedness that, unfortunately, largely eludes public scrutiny.

Apparently, Gingrich and the approving Iowa crowd have never heard of “the working poor”–folks stuck in low-wage jobs (often more than one), but still unable to escape poverty. Based on the crowd’s reaction, Gingrich’s November 28 speech achieved a key objective. Conservatives enjoy being told that poverty is caused by the bad behavior of its victims, a belief famously reaffirmed by Herman Cain (“If you’re poor, blame yourself!”). It is always easier to blame victims than to contemplate real solutions.

Gingrich’s views rest on the belief that single mothers in public housing are bad role models for hard work. But according to Andrea Levere, president of the Corporation for Enterprise Development, a nonprofit that helps poor families build wealth, most poor children are raised in families with a working adult. In an interview with NPR’s Pam Fessle, Levere observed, “many of these families work two jobs and three jobs.” And Fessler noted that in public housing, “about half of non-elderly, non-disabled households get most of their income from wages.”

Many poor people who cannot get public housing still try to get work. The National Coalition for the Homeless reports that approximately 19 percent of homeless shelter residents have a job.

Gingrich’s false and primitive protestations about the poor were distinguished by what he left out. The GOP’s newest presidential frontrunner failed to mention the constellation of forces that conspire to marginalize and degrade poor communities–including policies he and his party have long championed.

For decades, urban communities have endured massive job flight and the advent of a low-wage business model enforced by aggressive anti-union strategies – both of which are abetted by conservative economic policy. But this history is too inconvenient, even for a self-promoting student of history such as Newt Gingrich.

Of course, no one expects Gingrich and the right-wing crowds to which he panders to engage in critical thinking about race and poverty. They are invested in avoiding systemic analysis that illuminates the influence of external factors on the human condition.

Thus, a hallmark of conservative success in recent decades is the tarnishing of inconvenient terminology in our public discourse – root causes, socioeconomic conditions, historical factors, even inequality and social justice!–that implicates systems and gives context to individual failings. The right has made such language taboo, and those who continue to invoke it risk being marginalized and derided as hopelessly liberal, criminal-coddling, and trafficking in “moral relativism.”

However, the “no-excuses” dogma is demonstrably hypocritical, for it applies only to poor people. Notice how Gingrich himself blamed work pressures for his serial infidelity; or how conservatives wave off corporate criminality as “just a few bad apples.” The deck is stacked against the poor, because economic hardship raises the risk of moral collapse. But what is Gingrich’s excuse?

Actually, there is a self-serving logic to the Right’s aversion to a systemic approach to poverty mitigation. Really serious anti-poverty strategies would require its corporate benefactors to raise wages, dispense with unionbusting, support minimum-wage hikes, embrace national healthcare, and stop discriminating on the basis of race, gender, age and disability. This burdensome outlook is what angers conservatives. The truth threatens their worldview.

Conservative attacks on the poor are not new. As Speaker of the House, Gingrich once proposed cutting off welfare benefits for children born to unwed mothers, then using the money to build orphanages for the children. Many others have built political careers on this theme, often invoking the right’s favored parlance of “personal responsibility.”

Indeed, almost singlehandedly, the mantra of “personal responsibility” drove the national welfare reform debate, culminating in passage of the cynically titled Work Opportunity and Personal Responsibility Reconciliation Act of 1996. It was a bipartisan project, to be sure, but welfare reform was deeply rooted in a conservative ideology that blames poor people for their plight.

Not surprisingly, then as now, conservative champions of welfare reform -even as they invoked the “dignity of work”–showed no interest in substantive strategies to help the poor transition from welfare. Instead of mandating higher wages for the new entrants into the workforce, congressional Republicans doubled-down and refused to raise the minimum wage. In fact, between 1997 and 2007 (for 10 years!), GOP ideologues ensured that the minimum wage remained at an unconscionable $5.15 per hour.

Gingrich’s distorted characterization of poor people–a crowd pleaser on the campaign trail–is a caricature deeply embedded in the conservative psyche. According to this narrative, an out-of-control black culture is implicated in the devaluing of the work ethic and loss of moral values. In this worldview, black moral decay – not disappearing work, low wages, or poorly funded schools–causes urban poverty, joblessness and “social pathology.”

For conservatives, the solution is not to demand good-paying jobs, but to offer moral tutelage to poor children by (Gingrich’s plan) getting rid of “truly stupid” child labor laws and unionized workers and hire children instead. But what would displaced parents do, especially if they have to feed, clothe and educate their scabbing children? Where is the jobs plan for parents?

It is truly the height of detachment for a politician to worry about children who do not work rather than working conditions for parents (wages, health and pension benefits). Ironically, it is the unions Gingrich detests who are best-positioned to improve those working conditions.

To Gingrich, the crimes and moral lapses of elites are not rooted in their culture; they are isolated and understandable occurrences. But this exculpatory narrative goes further, and posits that because they are “job creators” wealthy elites should be exempted from the normal rules of accountability. Conservative attacks against the Frank-Dodd law and its Consumer Financial Protection Bureau–set up to police the banking industry–exemplify the impulse to create impunity for elites.

The right’s intellectually and morally bankrupt worldview–underpinned by the customary bromides about tax cuts, deficit reduction and small government – is why there has been no serious proposal by the GOP to address poverty and revive the American middle class. Conservatives are prisoners to a set of ideas whose only purpose is to serve capital. Addressing poverty would require conservatives to break with those ideas.

Poverty has always been a difficult subject for conservatives. The only way they know how to talk about it is to scold, demonize and stereotype the poor–and their advocates (witness the savaging of ACORN). But the louder the calls for “personal responsibility” for the poor, the lesser the willingness to demand accountability from corporations; and the more bombastic the homilies about Christianity, the meaner the rhetoric against “the least of us.” With so much energy invested in demonizing, one wonders when these good Christians actually pray for the poor.

Oblivious to the paradox, conservatives want poor people to appreciate “the dignity of work” while demeaning work (and workers) by driving down wages. That is exactly what happens when unions are marginalized, the minimum wage is held down and corporations outsource jobs – often with the help of political enablers and industry groups. The U.S. Chamber of Commerce, a conservative business association, actually assists corporations seeking overseas locations.

It would be a remarkable irony–even a silver lining–if the buffoonery of Newt Gingrich, who built his political career on demonizing the poor, helped rescue low-income Americans from their invisibility. Occupy Wall Street has deservedly been credited with sparking a debate about rising inequality. But perhaps we are also indebted to Newt Gingrich for his small contribution, however disturbing, to this overdue conversation.