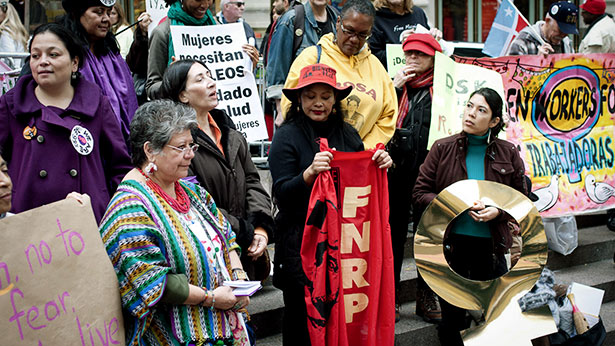 On November 20, protesters gathered in lower Manhattan said, "We, Spanish-speaking immigrant women of New York City, call on all women to join us ... as we demonstrate in solidarity with the Occupy movement." (Photo courtesy of Matti Keltanen)

Will Latino Groups Choose To Occupy?

The Latino and immigrant reaction to Occupy Wall Street has been decidedly mixed.

One reason why most major immigrant rights organizations are not formally participating in OWS may be that the white activists seen as leading the Occupy movement haven't been vocal about immigration reform.

NEW YORK–In late October, Tatiana Maurin made her way to Deutsche Bank’s offices at 60 Wall St. She was just one of a few dozen immigrant voices from Colombia, Argentina, Guatemala and Spain attending a weekly Occupy Wall Street (OWS) meeting in Spanish held in front of the bank.

Maurin, 34, was born in Argentina and raised in Venezuela but now lives in Queens, where she runs a small organization helping Latino families fight foreclosure. “We fight against the banks so people don’t lose their homes,” Maurin says. “This especially impacts the Latino community.”

Immigrants, of course, care about more than immigration reform–and from the foreclosure crisis to the influence of multinational corporations in the United States and Latin America, their concerns often overlap with Occupy protesters. But thus far, most major immigrant rights organizations, such as the New York Immigration Coalition or the Illinois Coalition for Immigrant and Refugee Rights, are not formally participating in OWS or Occupy Chicago, respectively.

That may be because the white activists seen as leading the Occupy movement haven’t been vocal about immigration reform. “White liberals have been largely silent while one million immigrants have been deported” under the Obama Administration, says Joshua Hoyt, executive director of the Illinois Coalition for Immigrant and Refugee Rights. “[Immigrants] are not marching to sign up for the Occupy movement.”

Lucy Tzunun believes that many undocumented residents may not attend the OWS protests because an arrest could lead to their deportation. Tzunun knows firsthand how the Obama administration’s immigration policies have resulted in mass deportations. Although she works as a nanny seven days a week, she found time to visit Wall Street for the late October meeting to ask people to sign postcards to stop the deportation of her brother back to Guatemala. She said immigrants, especially the undocumented, are at the bottom of “the 99%.” “They live with fear,” she says. “Many make such low salaries.”

The Spanish-language meetings, which began in early October on Sundays at 5 p.m., have continued even after Occupy demonstrators were evicted from Zuccotti Park on November 15. Attendees have raised issues emphasizing to protesters that America includes Latin America, talked about creating content for the OWS Spanish-language newspaper and complained about the military and multinational companies in Latin America.

Javier Castaño, director of Queens Latino, a Spanish-language newspaper, has attended the OWS meetings in Spanish. “There are no community organizations or major Hispanic leaders from New York here,” Castaño says.

But in Milwaukee, Voces de la Frontera has participated in Occupy protests and has even loaned office space to organizers. “We see this as an opportunity for the immigrant rights movement,” says Christine Neumann-Ortiz, executive director of the Wisconsin immigrant rights organization. Immigrants have been unfairly scapegoated in the economic crisis, she says.

In New York, protests have attracted individuals who are passionate about immigration reform. Natalia Fajardo, 27, traveled to the city from Burlington, Vt., to spend a Sunday afternoon at Zuccotti Park with her sister, Laura, who came up from Florida. Fajardo works for an organization called Justicia Migrante, a group that advocates for lettuce workers in Vermont.

“The [Occupy] movement was started by mostly middle-class and white people who are impacted by the high cost of education, cuts in public services. These are things that people in the immigrant community have dealt with for a long time,” says Fajardo, a native of Colombia. “We all know these themes impact us equally.”

Tania Unzueta, a leader of the Immigrant Youth Justice League in Chicago, is among the DREAM Act activists protesting immigration policy locally and nationally. She says her family–her father and sister are also activists–and many immigrant youth are not joining the Occupy movement because there is so much work to do in the immigrant rights movement. “All of a sudden people are saying ‘We are part of the 99%,’” Unzueta says. “But we have been saying that for a long time, and nobody has been listening to us.”

Teresa Puente is a professor of journalism at Columbia College in Chicago and a former member of the editorial board at the Chicago Sun-Times. She launched the website Latina-Voices.com to support Latino women in the media. Her blog Chicanisima can be read at chicagonow.com.