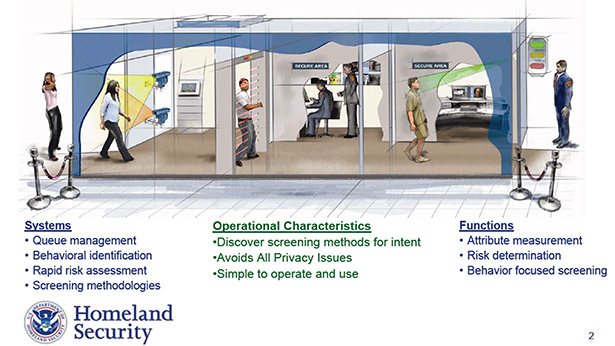 Some researchers have criticized The FAST Mobile Module on the grounds that it may be difficult, even impossible, to predict malicious intent using physiological indicators. (Photo courtesy of the Department of Homeland Security)

With its FAST program, the federal government is trying to read minds to fight terrorism.

The Department of Homeland Security claims the FAST technology is noninvasive because no physical contact is needed. Even so, many scientists see the technology as fundamentally flawed.

It’s called the FAST Mobile Module. It looks like an outdoor school trailer on wheels, complete with multiple screening rooms, three ramp entry lanes for greater “throughput” and state-of-the-art physiological and behavioral technologies that can detect an individual’s “mal-intent”–that is, intention to do harm.

The Mobile Module may one day roam the country, its high-tech sensors measuring heart rates, skin temperatures, body movements, breathing, pupil dilation and other physiological indicators to predict whether or not someone will commit a crime in the future.

The Department of Homeland Security (DHS) calls this program, established in 2008, Future Attribute Screening Technology (FAST). The goal is to “develop a prototype to detect deception and hostile intent in real time,” DHS Under Secretary of Science and Tehnology Jay Cohen has said. Internal DHS documents recently obtained by the Electronic Privacy Information Center (EPIC) through the Freedom of Information Act reveal the program in greater detail.

A 2008 preliminary test of the technology on volunteers went like this: First, subjects were assigned one of three distinctions: no mal-intent, mal-intent without device, or mal-intent smuggle. “Mal-intent smuggle” meant the subject was to try to smuggle a “disruptive device” past the sensors without being “flagged” by the FAST Sensor Suit–a tall bed frame-like structure fitted with thermal cameras, heart monitors and other physiological sensors that tracks subjects as they walk past.

If what the Suit saw fit with the FAST algorithm for mal-intent, subjects were taken to a secondary screening for more intensive questioning. The test, conducted in Maryland, in which 140 paid volunteers walked through a pair of trailers fitted with the FAST sensors, showed a “78 percent accuracy [rate] on mal-intent detection, and 80 percent [rate] on deception,” DHS science spokesman John Verrico said.

The FAST program has now completed its first round of field tests on the public. According to DHS, one of the program’s primary goals is to bring security to “open” areas–such as Metro, Amtrak and mass transit systems other than aviation–where threats could go undetected. The Mobile Module, according to DHS, “could be used at security checkpoints such as border crossings or at large public events such as sporting events or conventions.”

In the field tests, DHS tested the Mobile Module in at least one location in the Northeast. “It is not an airport,” Verrico told Nature magazine, “but it is a large venue that is a suitable substitute for an operational setting.” Whether these subjects knew they were participating in a FAST study is unclear.

EPIC claims that DHS documents reveal efforts to “collect, process, or retain information on” members of the public who likely did not give their consent. “We do think this is a program with great privacy risks,” says John Verdi, director of EPIC’s Open Government Project. Back in 2008, the DHS conducted a Privacy Impact Assessment (PIA), but when FAST moved into its public testing phase, Verdi says, “Our requests have revealed that the agency did not perform a PIA. In our view that is against the federal law.”

Federal law stipulates that in order to be approved, such a program must have the informed consent of each participant, ensure that adequate provisions exist to protect the privacy of subjects, and report any proposed changes in research activity for approval to the Institutional Review Board before implementation. So far, only lawsuits to obtain information have been filed against the FAST program. However, according to DHS’s website, the program has now initiated a Civil Rights/Civil Liberties Impact Assessment.

The agency claims its technology is noninvasive because no physical contact is needed. Even so, many scientists see the technology as fundamentally flawed.

Criticism of FAST comes from researchers who maintain that it is impossible to predict malicious intent using physiological indicators. Steven Aftergood, a senior research analyst at the Washington, D.C.-based Federation of American Scientists, fears that false positives–for example, someone who has anxieties about flying could exhibit signs of “mal-intent”–will cause innocent people to be flagged and render the system useless. In the world of poker, Aftergood says, “It is not true that every player has a tell that reliably reveals his or her intent. Nor are all ‘tells’ the same. Yet in effect, DHS is claiming otherwise.”

In addition, Tom Ormerod, a psychologist in the Investigative Expertise Unit at Lancaster University, worries that the system will become compromised once people know they are being tested. “Fill the place with machines that go ‘ping,’ and both screeners and passengers start doing things differently,” he told Nature.

How soon FAST technology will be determining “mal-intent” in “open areas” near you is anybody’s guess. DHS did not respond to requests for an interview.

Michael Solomon, a fall 2011 In These Times editorial intern, is a graduate of the University of Oregon.