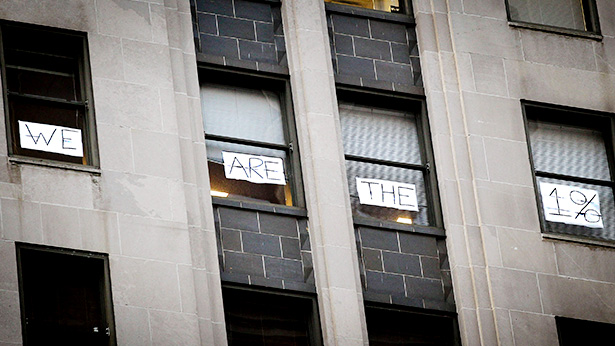 An affirmation of wealth posted in the windows of the Chicago Board of Trade on October 5. (Photo by Scott Olson/Getty Images)

The most common occupation in the 1% is non-financial corporate executive (31 percent), followed by doctors (16 percent), financial executives (14 percent) and lawyers (8.4 percent).

As Occupy Chicago sympathizers circled the monumental Board of Trade building in the city’s financial district in November, several demonstrators held aloft a large red banner with the now-familiar message, “We Are the 99%.”

Unlike safe political pitches to the middle class, that inclusive appeal asserts a common interest among workers of all wages, both the socially marginalized, and the traditional middle class of small business owners and educated professionals. And it posits a conflict between the interests of that super-majority and the 1%–including some of the futures traders who work inside the Board of Trade.

But who comprises the “1%”? And what is the conflict?

The Occupy Wall Street movement draws the line over income.

Since the 1970s, a tiny elite has captured most of the nation’s income growth, while most Americans have seen their income grow slowly, if at all. Wealth and power, linked loosely to income, are even more unequally distributed. In fact, the concentration of income, wealth and power is so extreme that the line could more properly have been drawn between the 0.1% and the 99.9%.

Income, wealth and power are bound together in the mind of Occupy protesters like Shirley Johnson, a middle-aged African-American tenants’ rights organizer, who defined the this way: “The bankers. The CEOs. The ones who make decisions. Politicians who do their bidding. The rich.”

Compared to the tycoons in the last period of rapidly rising inequality before the Great Depression, today’s rich are more likely to get fat salaries, bonuses and stock options as top executives or hedge fund operators rather than collecting dividends and interest payments, according to University of California, Berkeley economist Emanuel Saez. But in recent years, the Congressional Budget Office (CBO) reports, capital gains–distinct both from salaries and from dividends and interest–fueled the surge of the very rich.

Operating in a newly globalized and financialized economy, the 1% nearly matched their Jazz Age predecessors in taking a disproportionate share of national income. From 1979 to 2007 (before the stock and housing markets crashed), the 1% more than doubled their income share to take 23.5 percent of U.S. income. In other words, the average income of the top percentile nearly quadrupled (up 275 percent), according to the CBO, while average household incomes rose only 37 percent for the three-fifths in the middle and 18 percent for the poorest 20 percent. The 1%’s piece of the pie grew so quickly because from 1993 to 2007 it captured more than half of all income growth.

And looking at the rich in terms of total wealth rather than income, a household needed $9 million in assets to be among the wealthiest 1 percent in 2007, according to New York University economist Edward Wolff.

The most common occupation in the 1% is non-financial corporate executive (31 percent), followed by doctors (16 percent), financial executives (14 percent) and lawyers (8.4 percent). Critics of the Occupy movement have used the reported variety of occupations among the 1%–including farmers, scientists, pilots, and, most widely publicized, arts and sports stars–to argue that the focus on Wall Street is misplaced. But these occupations make up a small, declining share of the 1%. Since 1979, the number of sports and entertainment figures in the 1% has dropped by half.

By contrast, the number of financial industry workers in the top 1 percent has nearly doubled since 1979, and the biggest, fastest-growing paychecks went to executives and bankers, according to researchers Jon Bakija of Williams College, Adam Cole of the Treasury Department and Bradley T. Heim of Indiana University. When they looked at the top tenth of the 1%, they found even stronger evidence of the influence of the financial sector, which doubled in size and accounted for nearly 40 percent of corporate profits in the bubble of housing prices and derivatives. Executives and finance professionals constituted 60 percent of the top 0.1 percent and 70 percent of that group’s increased share of national income. Yes occupations of the rich vary, but corporate executives, and financial speculators and predators account for the lion’s share of rich people’s rapidly growing wealth.

Is any of this a problem? You bet. Here, briefly, are four reasons that super-sized 1% incomes are bad.

1. It’s not fair. Even if you believe people should be rewarded according to their contributions to increases in economic productivity, it’s hard to argue that predatory lenders, corporate raiders, hedge fund operators and other financial pirates are responsible for the increases in productivity since 1980, and that workers contributed nothing.

And it’s hard to argue America’s inequality is an inevitable result of globalization and new technology, when countries like Japan and Germany have experienced similar influences yet not increased inequality significantly.

Poor people suffer most, but Wilkinson’s evidence fingers not just poverty, but inequality (not only of income but also power over one’s life and work) as the cause of these stress-related social and medical ailments.

In other words, middle-income people suffer, too. If a virus from some Asian chicken threatened to cause half the harm that is the result of record American levels of inequality, a major public-health offensive would be launched with quarantines and vaccines.

3. It’s bad for the economy. Despite some economists’ core belief that inequality is a necessary price for efficiency and growth, many researchers have found that greater inequality is linked to slower growth. Even the International Monetary Fund has now found that income distribution has a stronger influence on growth than free trade or foreign investment.

Higher inequality also leads to higher borrowing and indebtedness by households and nations, which sows the seeds of financial crisis. IMF researchers Michael Kumhof and Romain Ranciere report that citizens who fall behind as inequality rises and wages don’t increase borrow more to sustain their lifestyles. The financial sector grows, and the rich invest there rather than in productive assets. But without bargaining power to raise wages, the economy grows more fragile and “there is no way to avoid addressing the income inequality problem head on,” write Kumhof and Ranciere.

4. It hurts democracy. Huge disparities in income are turning democracy into plutocracy and undermining many people’s social trust and sense of power, thus weakening their hopes for political action. Campaign and attack ad financing by the likes of the billionaire Koch brothers–worsened by the Supreme Court’s Citizens United decision–egregiously show how the rich gain influence.

But they also rule more indirectly, often through shaping popular ideas. As former IMF chief economist Simon Johnson observed, the big financial institutions that wrecked the economy not only captured their regulators, they also ideologically captured both political parties.

The Occupy movement helps cut though the prevailing ideological fog about inequality, which over the last few decades has made it easier for the rich to write the rules that make themselves ever richer.