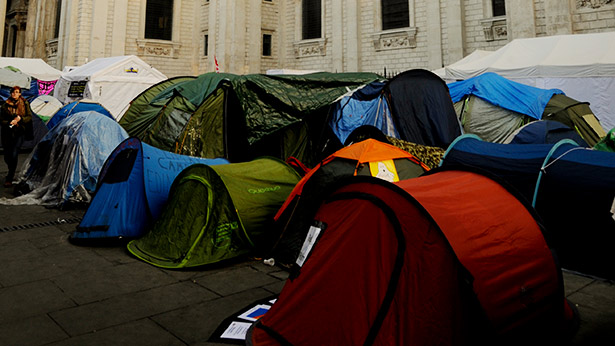 Guided by Our Grandchildren

It’s hard not to be inspired by the youthful idealism at the center of the Occupy movement.

Paternoster Square, in the heart of London, is the grim and newish development owned by Mitsubishi. It contains the Stock Exchange, Goldman Sachs, Merrill Lynch and a wing of the London School of Economics (once the nursery of left politics, now a bastion of the right). It was there that the Occupy protestors planned to pitch their tents, but the police stepped in, and this ugly and unloved spot is now impenetrable to the public. The tents are now set up around the corner at St. Paul’s Cathedral; and if some feel that the squabbles behind those vast ecclesiastical doors have distracted from the protest itself, many are grateful for them.

Two senior clerics–one a well-known broadcaster, Giles Fraser–felt obliged to resign, apparently for endorsing the protesters outside. The Archbishop of Canterbury wrote an article in the Financial Times supporting the protestors and arguing for a Robin Hood Tax on financial transactions, a move proposed by Angela Merkel and rejected summarily by David Cameron. The good behavior of the protesters, their tidiness, their ecumenical stance and their leaderlessness, have been given a warmer welcome here than anyone expected, perhaps as a consequence of those ecclesiastical distractions.

Much of the discussion has focused on charges that the church is hypocritical when it comes to supporting the 99% against the 1%, who do a good deal of their business a whisker away from our principal cathedral.

I went to the site guided by my 23-year-old grandson, Joe Miller. In the midst of about 20 neat rows of 10 tents was a line of recycling bins and a quartet of toilets. There was a book tent and a university tent, in which two young men, a Jew and a Muslim, were engaged in a heated yet respectful exchange. Tents these days require no stakes of the kind I remember hammering into the ground. They are light bubbles of brightly colored nylon that look as though they might easily take off like kites in a strong wind.

Joe and I attended the General Assembly, a friendly occasion at which anyone might have their say and those with technical skills were encouraged to offer their services at the Information Tent. That was a surprise, since such skills are assumed to flourish among protesters these days. But then again, some of the Occupiers are almost as old as I am.

An emissary from Occupy Wall Street, adorned with an ill-fitting dog collar and a shock of preternaturally white hair, brought greetings from the Big Apple. A charming woman offered a poster that could be adapted and distributed by protesters of different political persuasions. Famous visitors, proudly invoked, have included Tony Benn, Caroline Lucas–our only Green MP–and Julian Assange. Christians, Muslims and Jews announce their presence with handwritten posters above their tents and on the surrounding pillars.

Joe, my stern young guide, approved, as I did, of this gathering of differences and of the absence of the big political parties. Some of the protesters are people made homeless by foreclosures.

Joe also approved of the slowness of it all, of the acceptance that revolution, infinitely desirable, is hardly imminent, though he is determined to devote his own life to ending all stock exchanges, corporations and banks. The Occupy movement draws him as it draws many here of all ages. We are impressed that it is a quietly spreading international movement, mostly of the young, and that its focus is on inequality and unfairness.

The original camp has sprung new versions of itself, in nearby Finsbury Square and in a huge empty building in Hackney, East London, property of the Swiss UBS bank.

The London Occupy movement has created new alliances and articulated a new kind of activism. Expectations of mockery, violence and more riots have been frustrated. Twenty bishops (two of them arch), provoked by public criticism, have declared their opposition to the governing coalition’s cuts in public benefits.

To protest those cuts, on November 30, between 1 and 2 million Britons took to the streets in a general strike, sharing with the Occupiers a quiet determination to have their say and be heard.