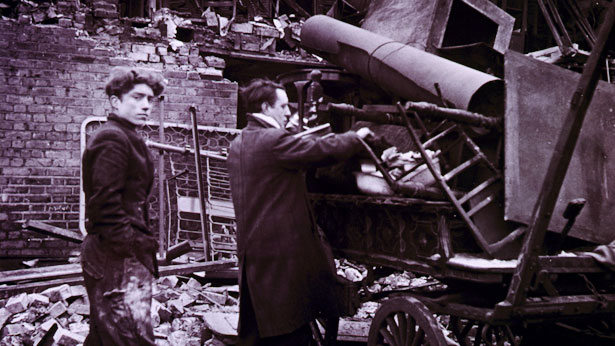 Among England's ruins in January 1945, two men load a wagon with their possessions. (Tony Frissell Collection/Library of Congress)

When Less is More Political Engagement

The only good thing about our new age of austerity is how it inspires a new wave of activists.

It's possible to feel that the worst effects of recession are a new callousness, a new set of rationales for inequality.

No more boom and bust,” said Gordon Brown, Chancellor of the Exchequer in 1997, New Labour’s first year in government. Fifteen years later, we are reminded daily that we are very much in a bust, and that things will get worse. We must all (or perhaps not quite all) tighten our belts in this era of austerity.

This may be less of a shock for those of us who remember Britain during the 1930s and World War II. We tell ourselves that we managed then without cars or washing machines or refrigerators. We grew quite fond of our ration books and gave a lot of thought to what could be bought with our clothing coupons. We didn’t get scurvy or get fat on a diet without oranges and bananas. Indeed, it is generally thought that the British people benefited from a more balanced and nutritious diet during the war than they’d had before it.

There was something leveling about those war years, despite films and novels that revel in the antics of the servanted classes, freezing in their unheated castles. A return to some of those lacks and scarcities would be hard for my generation, but harder still for the next one, let alone the one after that. By the middle of the 1950s we were pretty certain, after all, that life was getting better and that it would go on doing so. And it did. Our parents expected their children to have an easier time of it than they had had. Now most parents worry that their children will have far more to contend with than they did.

So far, it is undoubtedly the young who come off worst – and that really is a change. Youth unemployment is rising to new heights. Of the more than 1 million unemployed young NEETs (which stands for ‘not in education, employment or training’) between the ages of 16 and 24 in the U.K., almost 900,000 have been looking for work for a year or more. And since the announcement of a tripling of university fees, there has been a 15 percent reduction in the number of young people applying to higher education institutions for next year.

On the face of it, the government is warier of cutting services for the old than for the young. Even so, there have been disturbing revelations. There are tales of cruelty and neglect of old people in care homes and hospitals, and the possibility that the old constantly find themselves at the back of the queue waiting for medical attention. The moderately serious suggestion that old people should be required to downsize their homes in order to release spare bedrooms for the homeless has been another unwelcome suggestion. Public-sector workers are having to pay more for pensions that will be smaller than ours and delivered at a later date. Many people will be happy to go on working, although no thought has been given to what happens when the young are blocked from work which is still being performed by people in their 70s.

It’s possible to feel that the worst effects of recession are a new callousness, a new set of rationales for inequality. Apparently a majority of us blames the poor for their situation and despises them for wanting all the material things that the richer and the rich take for granted. Ruthlessness and competitiveness prevail and are admired. Dishonesty surprises and shocks us hardly at all. The government blames Europe, the last Labour government and the reckless, improvident poor for all our ills, and a majority of those who are asked for their opinion seem to agree with them.

Yet I have Irish friends who are scathing about reports in the English press that they are suffering appalling hardship. My friends believe we’re far too sorry for ourselves and too patronizing about them. It’s all nonsense, they say. The Irish are used to austerity, and as their boom time only lasted for about 10 years, they feel up to the austerity they’re required to go back to.

I am torn between pessimism about the effects of new levels of poverty on our unequal society, and optimism about the vitality of Occupy and other political engagement that take austerity as a given – and even a kind of inspiration.