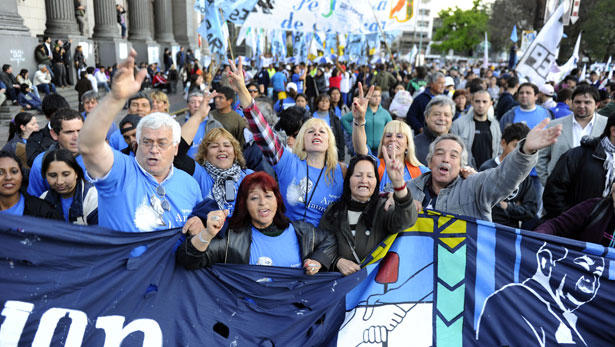 Argentina’s Pulp Fiction: Grupo Clarín and Freedom of the Press

A new law aiming to end a media monopoly is condemned by international news outlets.

With its dominance in peril, Grupo Clarín has launched a savvy marketing campaign, charging Kirchner with launching an attack on press freedom.

BUENOS AIRES–In June 2002, hundreds of Argentines swept through this city in protest, calling for the government’s help in the wake of an economic crisis that had devastated the nation. In a fit of violence, police officers fatally shot two young men. The following day, Clarín, the nation’s largest newspaper, ran the following headline:”The crisis causes two new deaths.” The tone of the headline–implicitly abdicating the police and government of any responsibility – symbolizes what Clarín has done for decades: let corrupt, bloody governments off the hook for their crimes.

The crisis that rocked Argentina 10 years ago has ended. But Grupo Clarín, the media conglomerate that owns Clarín, remains powerful. The corporation controls 50 percent of the country’s newspaper and magazine circulation, as well as the largest television network in Latin America. It also controls Papel Prensa, the nation’s only newsprint-producing company, allowing it to sell paper to rival publications at predatory prices.

So Argentina’s newly re-elected president, Cristina Fernandez de Kirchner, pushed for a law designed to break Clarín’s grip on the country’s media industry and open avenues for new voices. The Ley de Papel Prensa declares the production and distribution of newspaper in the “public interest,” and requires that the paper company sell paper to everyone at the same price. The idea is that non-Clarín media will now be able to afford to publish.

The law, passed jat the end of last year, is part of larger social reforms that empower poorer people and bring former leaders to justice after the dictatorship of the 1970s and 1980s. It is also part of an effort to right the wrongs of that era: Grupo Clarín owes much of its success to well-documented collusion with Argentine dictators. Indeed, the text of the new law includes an extensive report on the way corrupt officials helped Clarín acquire the paper company.

Kirchner’s supporters, including many students, prominent human rights groups and lower-class Argentines who stand to benefit from her social reforms, cheer the new law. With its dominance in peril, Grupo Clarín has launched a savvy marketing campaign, charging Kirchner with launching an attack on press freedom. The campaign has convinced many foreign journalists, including reporters working for the Associated Press, Brazil’s O Estado and Spain’s El País.

These outlets have reported the corporation’s arguments against the law as facts, warning against a meddling Argentine dictatorship with an “excessive concentration of power” (El País). The Associated Press reported that the production of paper is now “under government control.” (Not so, according to the text of the law.) And the Inter American Press Association condemned the “malicious attempts by the government of Argentina to control press freedom.” Grupo Clarín, in turn, has quoted these reports in its own outlets, basking in a reflected, and false, legitimacy.

What many inside and outside Argentina have ignored, however, is that governments around the globe have long moderated the power of media companies. The bill’s approval follows the passage of another law that limits the number of television channels a media company can own – a law criticized by Clarín , but one that mimics regulation in places like the United Kingdom and the United States.

“Get your head out of the water, opositores,” writes Argentine journalist Alberto Daneri, addressing those who criticize the Papel Prensa law. “The law declares the distribution of paper ‘in the public interest,’ not ‘in the party’s interest.’”

Julie Turkewitz lived in Buenos Aires in 2008 and 2009. She writes about AIDS and homelessness for the nonprofit Housing Works.