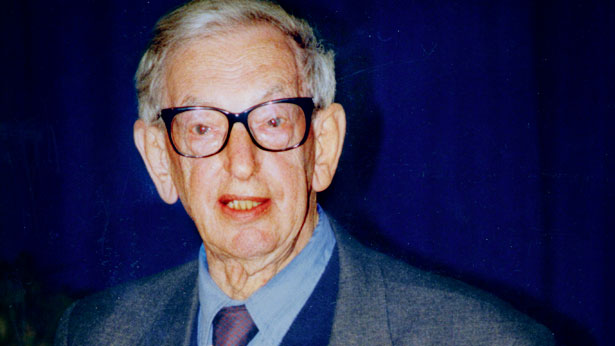 Marxist historian Eric Hobsbawm, 94, is not the retiring type. (Photo courtesy of the University of Vienna)

94-year-old historian Eric Hobsbawm is heartened by the Arab Spring.

The Arab Spring is encouraging. I didn't expect to see in my lifetime a genuine, old-fashioned revolution with people going on the streets and overthrowing regimes.

Eric Hobsbawm, Marxist historian, public intellectual and author of, among many other books, The Age of Revolution: Europe 1789-1848, was born nearly 95 years ago in Alexandria, Egypt. He grew up in Vienna and Berlin, but after the death of his parents he moved to London in 1933 where he finished his

schooling. I met him in 1952, during my first term at Cambridge, in the University Library. He was studying bandits. Hobsbawm was a Fellow of King’s College, Cambridge, from 1949 to 1955, but taught for most of his academic life at Birkbeck College in London. Later he was a visiting professor at the New School for Social Research in New York.

A much-admired historian, he always attracted controversy, and was occasionally vilified. He was a longstanding member of the Communist Party of Great Britain and has, over the years, been criticized for his refusal to apologize both for that and for some of the iniquities committed in the name of socialism. Nevertheless, in 1998 he was made a Companion of Honour (a title conferred on very few people by the Queen) “for his brilliant analysis of the troubled history of twentieth-century Europe and for his ability to combine in-depth historical research with great literary talent.” Hobsbawm spoke with In These Times at his home in Hampstead, North London, at the beginning of this year.

Your most recent book, How to Change the World: Tales of Marx and Marxism, came out early last year. Now we have two vehicles for change, the Arab Spring and the Occupy movement. How much promise do they really offer?

The Arab Spring is encouraging. I didn’t expect to see in my lifetime a genuine, old-fashioned revolution with people going on the streets and overthrowing regimes, something like the 1848 revolution, which is actually the origin of the name Arab Spring. Remember, 1848 was called the Spring Time of the People. And whatever happens in the future is enormous. There have been other positive developments because of the extraordinary ease with which it is technologically possible to mobilize young people. The Occupy movement is one example of this, as are the recent demonstrations in Russia. It is no longer possible to take the passivity of the citizenry for granted.

There are drawbacks. The people who take the initiative are not a representative minority. They are the mobilizable minority, what I used to call “the stage army of the good” – in this case, the stage army of the students and bohemians. But the point is, if things go any further, it may get out of their control.

One of the reasons I was keen to write this book was to keep reminding people, especially young people, that it is possible to change the world.

You have said that this group of young people in Egypt and elsewhere are largely middle class and educated and possess technological expertise, and so are separate in many respects from any working-class movement. Do you still feel that this is a very middle class kind of revolution?

No, it’s much bigger. Just as in 1968, student movements set off quite large-scale labor movements in France and Italy. On the other hand, there is an undoubted danger of the division between the people who get certificates in school and the people who don’t. Reactionaries know very well how to exploit this division.

You write that the trouble with middle-class revolutionaries is they are protesters rather than aspirers. They are clear about what they don’t want, but not about what they want.

It’s also that certain issues are very powerful among the educated middle class; environmental issues, for instance. If you say, “What’s more important in this area, jobs or making it more green?,” there would be a difference in the class reaction. There are a number of crucial issues of the educated minority, which is by now quite a large minority, which don’t echo so much among the working-class people; for instance, a lot of the issues on gender relations.

Do you think that the kind of politics in the 1980s, which some call “identity politics,” was undermining a genuine revolution?

Yes, on the whole I do, because the politics for improving the world must aim at improving the lot of everybody, rather than a particular sector.

It’s complicated because there is a moment when the focus on a particular group, like women, is important because otherwise it never gets aired.

This is a peculiar sort of paradox. On the one hand, socialists were very much in favor of the emancipation of women. Going back to the utopian socialists, the Saint Simonians made a religion of it. Women prophets, for example. Also, the most important writing of the working-class leader of the German social democratic party, August Bebel, was Women Under Socialism [1904].

But when it comes to actual socialist governments and regimes, women have indeed been under-represented. It was dramatically the case in early communist ones, but even in the social democratic Western ones women had to fight for their position. On the other hand, women have always been absolutely essential to labor movements, which have not been gender movements, but family movements.

In your book, you write about the 2008 crash of capitalism. You have a good phrase for it: “The jagged rhythm of capitalist growth produced periodic crises of overproduction which would, sooner or later, prove incompatible with a capitalist way of running the economy and generate social conflict which it could not survive.” And you talk about New Labour and the “pathological degeneration of the principle of laissez-faire.”

It was pathological because it didn’t relate to reality. You knew this wasn’t the way people actually behave. The later decay of the 20th century wasn’t just the crisis of communism, but also the crisis of social democracy. Social democratic parties put pressure on their governments to reform this, that and the other. Once the governments lost control of their economy to a transnational economy – or didn’t want to exercise it – reforms became more and more difficult.

New Labour leaders came down on the side of the pure laissez-faire because they reasoned, “at least if these people earn a lot of money some of it will trickle down to us.” That was the New Labour line, really. Keep the City [London’s financial district] as important as possible. Don’t start interfering with it because that is where the money comes from.

Did you predict the sharp and sudden crisis of 2008?

No, I’m not an economist. I had gone on for ages saying that this triumph of ultra-neoliberalism simply cannot last. But I didn’t predict when it was actually going to break down.

When you say “cannot last,” do you mean economically or socially or both?

Economically. Eventually the thing was going to crash. It was obviously getting madly out of hand. A small minority of people expected it. Some businessmen.

George Soros claims to have. You talk to him sometimes, don’t you?

I’ve seen him on and off. From 2008 on, it increasingly became clear this was the biggest crisis since the 1930s. And it’s increasingly clear that it hasn’t been overcome yet, at least in the Western countries. Also, something much more serious has happened. Capitalism has lost, and has become conscious that it isn’t producing what it’s officially supposed to. It’s lost its sense of legitimacy.

It could only ever be legitimized because it worked. There never was a moral argument for it other than that.

Exactly right. This extraordinary polarization of wealth, which created the Occupy movement and which in turn meant the movement got vast echoes of support from people who otherwise had no sympathy at all with anti-capitalism. So for the first time in many years the question “Does the system require such dramatic change that it can no longer be regarded as capitalism?” has become part of the agenda.

Is there anybody in politics at the moment who you have faith in and believe sees any of this, and let alone could do anything about it?

I’m not very optimistic. It seems to me the basic problems to deal with – economic problems and environmental problems, and others – are global or international. Globalization has not affected politics. Politics continue to take place as though we were separate.