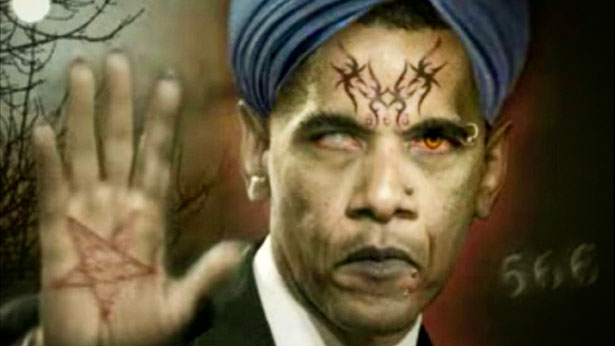 There Will Be Paranoia

As long as there are dispossessed white people, there will be conspiracies.

Goldwag's central, and disturbing, insight is that what stands out most prominently about contemporary paranoids and conspiracists is, ironically, their lack of newness.

To purchase The New Hate: A History of Fear and Loathing on the Populist Right by Arthur Goldwag, please visit:

In These Times has an agreement with these three booksellers to send a small portion of the cost of the book to the magazine.

Lengthy screeds featuring the dangers and hypocrisy of the New Right are common fare in progressive publications. Although I tend to agree with the screeds, I find them tiresome and sometimes counterproductive. By bestowing so much attention on the haters who have formed the

Tea Party movement and largely co-opted the Republican Party, the authors of the screeds flatter those who would oppress the afflicted rather than help the afflicted help themselves.

But Arthur Goldwag’s The New Hate: A History of Fear and Loathing on the Populist Right (Pantheon) is a welcome relief. Yes, Goldwag is worried about the men and women who constitute what he calls the Populist Right. But instead of mounting another frontal attack, Goldwag offers sober historical context. Nothing neutralizes bullies like derision grounded in research, and Goldwag offers enough material to yield a lifetime of snickering, if not outright laughter. He collected some of that material in his previous books: Cults, Conspiracies, and Secret Societies: The Straight Scoop on Freemasons, The Illuminati, Skull and Bones, Black Helicopters, The New World Order, and many, many more; and ‘Isms and ‘Ologies: All the Movements, Ideologies and Doctrines That Have Shaped Our World.

Goldwag wants to understand the origins of the hostility in his new book. Here is perhaps his best explanation: “The New Hate is at once the expression of a quixotic desire to turn back the clock to a mythical golden age when women and minorities and gays and foreigners were less troublesome than they are today; when the government only gave and never took; and a cynical ploy to up the turnout of Republican voters. Most of the time it’s reflexive and vindictive to its core.”

Goldwag underscores how the past serves as prologue. Again and again in The New Hate, he demonstrates how the theories, and the rhetoric spreading those theories, were devised decades and sometimes centuries earlier by previous generations of conspiracy-minded, history-twisting, racist, misogynistic, homophobic evangelicals. Since the internet spawned authoritative-sounding blogs and social media, the haters appear to have become better at reaching beyond the lunatic fringe. For example, right after Barack Obama’s election, Goldwag noticed the controversy over Obama’s birth certificate continued unabated. He wondered whether to add a paragraph about Birthers to a new edition of one of his previous books, but decided “that references to such a transitory political derangement might just as easily date” the book as update it. No one will remember the Birthers six months hence, he calculated – mistakenly.

The equivalent of the Birther movement has existed in previous centuries and inspired books by clearheaded authors. As Goldwag notes, the “canonical works of scholarship” preceding his include The Paranoid Style in American Politics by Richard Hofstadter; Right-Wing Populism in America: Too Close for Comfort by Chip Berlet and Matthew N. Lyons; and The Politics of Unreason: Right-Wing Extremism in America, 1790-1967 by Seymour Martin Lipset and Earl Raab. Goldwag’s tome is the most up-to-date, naturally, but it is also the best written and the least paranoid about paranoid haters.

Because Goldwag’s book is so impressively grounded in historical research about the Populist Right, it does not come across solely as a polemic based on passion and selective use of evidence. Still, because of the targets’ sleaziness and stupidity, in some of the case studies Goldwag provides he cannot help editorializing. In a passage about Birtherism, Goldwag notes the alleged conspiracy “would have required either supernatural forethought or time travel, as not only is a birth certificate with a raised seal and signature on file in Hawaii’s office of vital records but contemporaneous announcements of Obama’s birth were published in two Honolulu newspapers.”

When Goldwag launched a blog a few years ago, he received lots of correspondence from individuals who probably never would have read his books, but found him online. “What struck me, over and over again, was how old most of their causes turned out to be. Americans have been demonizing blacks, non-Protestant Christians, freethinkers, Asians and Jews since colonial times.”

One of Goldwag’s revelations while researching past centuries is how a penchant for conspiratorial thinking leads to demonizing portions of the population who become “the other.” As he explains, conspiracists are, by definition, seeking scapegoats to blame for whatever seems wrong in society. Those scapegoats do not always have dark skin, and do not always profess objectionable religious faiths or atheism. As Goldwag realized, “Income levels and years of schooling, sexual preference, gender, and political affiliation have all sufficed at one time or another to mark a person as belonging to a group that is dangerously ‘other.’ “

There is still a lot to figure out about organized haters, even for dedicated scholars such as Goldwag. He concedes being caught unprepared five years ago, after publication of ‘Isms and ‘Ologies. Radio talk show host Tavis Smiley asked Goldwag why the book’s index failed to list the term “racism.” Improvising a reply, Goldwag said, “That’s because I confined myself to specific systems of thought. I wrote about racist philosophies, but racism in general signals the absence of thought.” Goldwag could tell Smiley found that answer weak, as did Goldwag. As a result, he conceived The New Hate as a book about “the role of organized hatreds in the historical arc of American politics.”

Organizing his book to demonstrate that searing, depressing insight proved to be a challenge. After an introduction worth the price of admission, Goldwag devotes two chapters to lots of definition, first “The Paranoid Style of Hatred” followed by “What Is Conspiracy Theory?” Then he moves to lump together movements by generation, touching on everything from The Protocols of the Elders of Zion to white supremacists.

Goldwag comes to realize that what stands out most about contemporary paranoids and conspiracists is, ironically, their lack of newness: “The most depressing thing about the demagogues who tirelessly exploit it – in pamphlets and books and partisan newspapers two centuries ago; on websites, electronic social networks, and 24-hour cable news today – is how much alike they all turn out to be.” They cannot, will not, look inside themselves for the source of their perceived or real suffering. Finding conspiracies to blame is their default position.

Perhaps at least some of the haters are somewhat self-aware. As Goldwag concludes, “Though millions of Americans claim to believe that Obama is a Muslim and a foreigner, and some of them hate him because of the color of his skin, most of them know that the real issue isn’t what Obama is, but what they increasingly fear they’re not.” What they are not is part of the ruling class, despite the privilege they believe being born a white American should bestow.