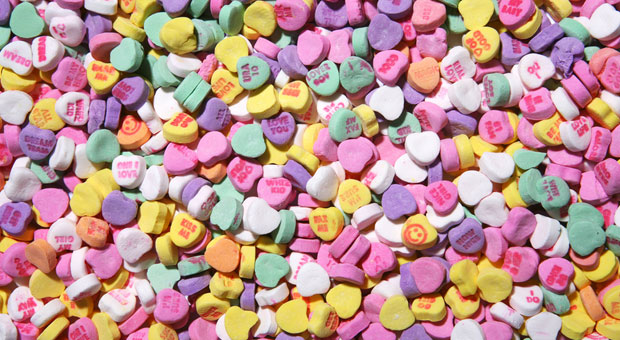 All You Need (to Protest) Is Love

Occupy V-Day wants you to challenge corporate conceptions of romance.

Occupy V-Day encourages the public to use Valentine's Day to challenge our cultural (and pop-cultural) conceptions of love and romance and to provide their own definitions.

Love–according to one line of thinking, anyway–is our first and most important education in social justice. To love someone, religions and therapists and poets and various sitcom episodes tell us, is to care about their well-being as profoundly, and as constantly, as you care about your own.

If love works this way, there can be no oppression within it. There can be no exploitation, no stereotyping, no tyrant to hand down laws to the populace, no populace to revolt. There can only be the fact of mutual care; all rules, in this small republic, are consensus-based, and all rights are equal rights. Love does not erase the facts of our social reality, but it illuminates them; through complete absorption in the particular, it reveals the shakiness and incompleteness of our relation to the whole. Everyone you meet could become as important to you as yourself, should you love them. You won’t love them all. But at least you can recognize the particular and human in them, and commit to fight against the structures that degrade or erase it; at least you can work to create a culture that grants each person the humanity that you have learned to see in others by loving.

According to one line of thinking, anyway. According to another line, love is the reason you really, really need to finish shopping–or at least get a decent restaurant reservation–by February 13.

Samhita Mukhopadhyay, executive editor of Feministing and author of Outdated: Why Dating is Ruining Your Love Life, is launching a fight against, as she put it in a phone call, the “corporate or even political systems [that] shape how we think about love and romance.” And she is picking the stickiest, sappiest, most cardboard-heart-prone day of the year to do it.

Her project, Occupy V-Day, encourages the public to use Valentine’s Day to challenge our cultural (and pop-cultural) conceptions of love and romance, and to provide their own definitions: The Occupy V-Day blog suggests that you “shout about the lack of queer visibility in sexual rights politics,” “blog about how traditional ideas of romance perpetuate gender inequalities,” or “have a sexy conversation by candlelight with your partner about structural inequity.”

In practice, the Occupy V-Day Tumblr is wildly diverse: There are signs protesting the idea that “every kiss begins with Kay,” odes to single bliss (“I get the whole bed to myself”), updates on Prop. 8 and same-sex marriage, and vows of love and support for sisters, friends, and pet dogs. And, of course, someone who posts (more than once!) about “sheep-like seekers of romance” and informs the world that people in love are “basically high on drugs” and that “true love is forgiving them” for having a relationship. That last bit may be unseemly, but anyone who has broken up with someone in early February can probably relate.

Mukhopadhyay cautions against a shallow critique of the holiday on one hand–“you can say you don’t like Valentine’s Day, but you can still support heteronormativity”–and the dangers of self-obsession as activism on the other. She sees the project as a way to interrogate intimacy, and illuminate how it’s shaped by the greater social context.

She made the choice to tie this project to the language of the Occupy movement, Mukhopadhyay says, because both movements speak to “the desire to have different power relations in your life, but [while] talking about how larger forces produce these social structures.” When it comes to intimate relationships, she says, this conversation is often neglected.

“We literally do not have the tools,” she says. “And I think recognizing that it’s this larger structural problem where we do have very limited roles… Our power within that is very limited. I sound like such a Marxist! But I feel like recognizing it and connecting it to this larger context helps people feel less alone.”

Where Mukhopadyay is looking to Occupy love and romance, and to open them up for a wider narrative, filmmaker Velcrow Ripper is finding love within the Occupy movement himself. He is making a documentary, “Occupy Love”, about the human connection and passion at the heart of Occupy and other movements.

“I have travelled around the world tracing this phenomenal year of change, of global transformation,” Ripper told me in an e-mail, “and I have found that the underlying thread that connects the dots is really love. It is a love of justice, it is a love of humanity, and it is a deep sense of interdependence.”

Ripper says we live in “a nightmare paradigm of a commodified world, a lifeless world of objects, separation and scarcity. We are awakening to a new possibility, where the true abundance of this Earth is no longer hoarded. Where relationships are not transactions. Where your well being is my well being is the planet’s well being.”

Some of this may seem like an impressively fuzzy way to think about, say, campaign finance reform. But then, it also speaks to the fact that one thing radicals have always done best is to re-envision the relational status quo.

Similarly, it may seem silly at first to focus on Valentine’s Day as a force for radical change–“I’m a media producer,” Mukhopadhyay told me when I asked her why she chose the holiday. “It’s a great hook”–but in fact, Occupy V-Day is part of a long lineage of feminist projects that challenge the conventions of romance by starting with what we take for granted. This line stretches through bell hooks’s popular book series on love, through the V-Day campaign against sexual and relationship violence, and even to Emma Goldman’s writings against marriage.

Love, according to one line of thinking, is our first and most important education in social justice. According to another line of thinking, it’s a reason to buy your partner some romance on a certain day of the year. But according to a third, perhaps more truly radical line of thinking, we don’t know what love is yet. We don’t live in a world that has allowed us to experience it freely. It’s only when we all start talking about love, together–pushing the limits of our own imaginations, and challenging each other to take nothing for granted–that we can find it.