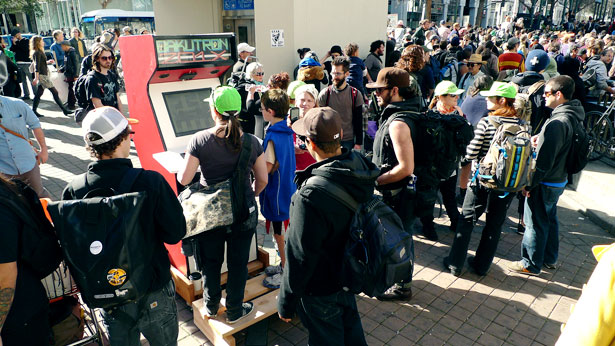 National Lawyers Guild Fights for the Right to Occupy

When protesters land in court, a network of volunteer lawyers defend them.

Where the NLG differs from other legal organizations is its close collaboration with protest movements to document arrests and defend arrestees.

Authorities around the country have targeted Occupy protesters with selective enforcement of the law. In November, demonstrators were evicted from camps in New York, Denver, Portland and a score of other locations. And new anti-camping ordinances passed since January have been used to break up the remaining winter encampments in cities like Charlotte, N.C., and Honolulu. Organizations like the NLG, the American Civil Liberties Union and Public Citizen have helped Occupy to challenge eviction orders and oppose new “anti-Occupy” laws.

Where the NLG differs from other legal organizations is its close collaboration with protest movements to document arrests and defend arrestees. Founded in 1937 as a progressive alternative to the American Bar Association, the Guild established a legal observer program in 1968 to defend Vietnam War protesters who had taken over Columbia University buildings. The same year, the NLG organized to defend demonstrators arrested at the Democratic National Convention in Chicago. The organization has since been on the front lines against the repression of activists in the environmental justice, antiwar and civil rights movements.

“Organized dissent in America would be impossible without [the Guild],” says independent journalist and Occupy activist John Knefel, who was held for 36 hours after being arrested December 12 for the crime of filming police activity during a protest in New York. “As a journalist without NYPD-issued credentials, I know that I could get arrested at any time while I’m covering Occupy. Knowing that I have lawyers who will work pro bono on my case makes my job significantly less stressful.”

On the West Coast, NLG attorneys scrambled to deal with the aftermath of Occupy Oakland protests in October. Following the chaos in the streets, Oakland protesters found themselves in legal limbo, sometimes waiting two months to have charges leveled against them.

Rachel Lederman, a California-based NLG attorney, calls the waiting times “very abnormal” in terms of the general criminal process. “Many people have been getting snatched for no reason. But then they’ve been released and are in a state of limbo. We’ve been in a position of having to tell people they have to keep calling the DA’s office for months to make sure they don’t have a warrant and they’re not being charged,” says Lederman.

The NLG also defends privacy and First Amendment rights. Malcolm Harris, a 23-year-old OWS activist who was arrested along with 700 other protesters on the Brooklyn Bridge last October, had his Twitter records subpoenaed by New York District Attorney Cyrus Vance. The January 26 subpoena demanded “any and all tweets posted for the period of 9/15/2011-12/31/20011” by Harris. NLG attorney Martin Stolar told The Guardian that the DA was probably looking for an incriminating statement. “Three and a half months of this guy’s tweets and personal records – and for what, to go fishing?”

Jim Fennerty, an NLG lawyer in Chicago, is one of the attorneys who recently reached a $6.2 million settlement in a class-action lawsuit brought against the Chicago Police Department on behalf of hundreds of protesters arrested en masse, without warning, during a 2003 protest opposing the start of the Iraq War. The lawsuit and settlement may have influenced CPD’s handling of Occupy Chicago, where, Fennerty notes, police went up to demonstrators individually and gave them an order to disperse.

But in the heat of the moment, he fears any lessons learned by police from the 2003 case, which took nine years for the city to settle, will instantly be forgotten. “Will that change for G8 and NATO [summits in May]? I don’t know,” Fennerty says.

However, he’s pleased that the end result was one in which protesters secured a victory. “This is an important decision because it shows, if the police do this – even though it may take a long time – in the end, the right to protest is going to win out.

Allison Kilkenny is an In These Times Staff Writer and the co-host of the critically acclaimed radio show Citizen Radio. Her blog for In These Times, Uprising, focuses on efforts around the world to address the global economic crisis.