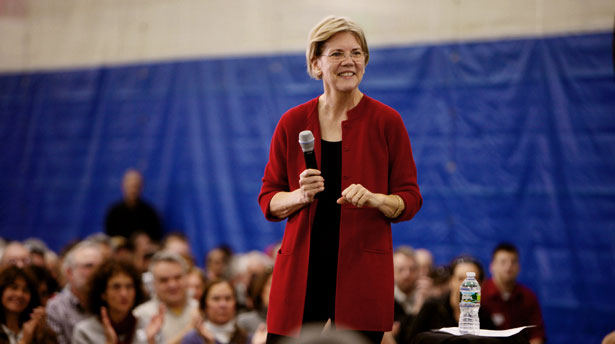 Warren speaks to nearly 1,000 supporters who pledged to work for her campaign during an event in Roxbury, Mass., on Nov. 13, 2011. (Photos courtesy of Elizabeth for MA)

The Ascendance of Elizabeth Warren

Understanding the woman behind the hype.

Warren may win Massachusetts. So we're faced with an unusual situation: For the first time in memory, Mr. Smith is a girl. Stranger still, no one seems to mind.

If you’re reading this, you probably already know how you feel about Elizabeth Warren. Warren is currently running for Senate in Massachusetts, in the hopes of knocking out Republican incumbent Scott Brown. Very few first-time candidates are so well-known, or so passionately beloved.

For much of the past decade, Warren has made her name as a left-wing media star, appearing in documentaries and on progressive talk shows to advocate for the middle class against a corrupt financial system. In 2008, she was appointed to chair the Congressional Oversight Panel for the Troubled Asset Relief Program (TARP). From that position, she created the Consumer Financial Protection Bureau (CFPB), whose goal is to make mortgages and lending transparent, and to uncover predatory practices. Eighty-nine House Democrats petitioned for her to be appointed as the agency’s head.

She didn’t get the job. Obama passed Warren over, nominating and then appointing Ohio Attorney General Richard Cordray to the post when Congress was in recess in January. Warren’s forthright consumer advocacy was anathema to the banking industry, and reportedly rankled some Obama administration officials, particularly Treasury Secretary Timothy Geithner. Instead of working with powerful banking interests who wanted to weaken the CFPB, Warren called out politicians on both sides of the aisle for their complicity. She proclaimed: “My first choice is a strong consumer agency. … My second choice is no agency at all and plenty of blood and teeth left on the floor.” This attitude did not make her popular with co-workers. But it did earn her massive public support. Reading Warren’s press often feels like listening in on the meeting of a strange law-professor-centric fan club. “Heaven is a Place Called Elizabeth Warren,” read the headline of a Rebecca Traister piece in The New York Times Magazine. “[A] modern-day Mr. Smith, giving voice to regular citizens astonished at the failure of Washington to protect Main Street,” wrote Suzanna Andrews, in Vanity Fair. At Salon, Steve Kornacki predicted her 2016 presidential candidacy in November 2011, when it was uncertain whether she even had a decent chance of winning the Massachusetts Senate race. For what it’s worth, Kornacki was being conservative; journalist Matt Taibbi (and, apparently, the folks at ElizabethWarrenforPresident.com) even wanted her to run in 2012.

Her platform in Massachusetts is the same as ever: She argues passionately for increased financial protection for the middle class and for strong governmental oversight and regulation of the economy. And she has a good chance of winning. Warren and Brown have both agreed to eschew campaign ads from Super PACs. This means they have to rely on direct donations – a good indicator of popular support. In the fourth quarter of 2011, Elizabeth Warren raised a reported $5.7 million. Brown raised half that.

And so, we’re faced with an unusual situation. For the first time in memory, Mr. Smith is a girl. Stranger still, no one seems to mind.

Women who enter the political arena in any way, no matter what their actual politics, are almost invariably plunged into public-relations hell. If they’re confident and eloquent, they are portrayed as castrating. If anything less than perfectly articulate, they’re portrayed as ditzes. If people find them attractive, they’re called bimbos. And if not everyone finds them attractive, they’re called frumpy. Their sex lives are scoured for incriminating details; when Christine O’Donnell ran for a Delaware Senate seat, Gawker found someone she’d dated to write about the condition of her pubic hair. And everyone is on the lookout for signs of incipient female hysteria: Tears, anger, or just a case of Bachmann-esque “crazy eyes” can do a woman in.

But the flood of sexist scorn to which most women in the political arena are exposed is conspicuously absent when it comes to Warren. Sure, one fellow called her a “socialist whore” at a meeting. But for Michelle Obama, that’s just a normal Tuesday. The most noticeably sexist reaction to Warren has been the propensity of male supporters – Jon Stewart among them – to say they’re in love with her. (Or as Stewart put it, less romantically: “I want to make out.”) Her female supporters have taken notice. Hilary Gerber, one of several Warren fans I spoke to, made special mention of it.

“She showed a mastery of a subject, economics, that is usually thought of as a man’s domain,” Gerber told me. “I, perhaps naively, think the backlash against her appointment to head the CFPB was a reaction against Obama more than it was against her.” Gerber noted that even this backlash “did not reek of the overt sexism” that has plagued other female politicians.

Even when people do hate Warren – and many do – they tend to stick to the issues. They condemn her ideas, not her gender. Unlike many female candidates, the public has seemingly allowed Warren to succeed or fail on the strength of her work alone.

The question of how Warren has accomplished this is tricky. Her success has much to do with her timing. To be blunt, the economic and political situation is so bad right now that Americans are grateful to anyone who argues for the rights of the middle class against the rights of multi-billion dollar corporations. And Warren is a sharp, convincing arguer. Perhaps we are so desperate for a champion that we no longer care about the champion’s gender. Warren’s intense, consumer-targeted focus on the economy is exactly what people want to hear. If she keeps it up, her gender will remain a secondary concern.

But Warren’s background isn’t irrelevant. Much of her charisma depends on it – her working-class, just-folks upbringing, her story of a mid-life conversion to defending the middle class against economic predators.

“Honestly,” one (male) Warren supporter and UMass student wrote for The Massachusetts Daily Collegian in February, “I look for the person most like myself. If someone’s walked in my shoes, I’m comfortable that they understand where I’m coming from and that they can be trusted to act in my best interests. It’s why I like Rick Santorum … Never have I seen someone with a more similar backstory to my own than Warren.”

It may seem bizarre for a man to “like” both Santorum and Warren, based solely on the fact that he thinks they’re both “like himself.” But whether we admit it or not, many of us vote by the same criteria. It’s precisely this everyman quality of Warren’s – her ability to convince the public that she’s just like “us,” whoever “we” are – that often draws people into her camp. Warren has nurtured this reputation. She’s far from mendacious. But like any politician, she’s played a role in the creation of her image. And the more one examines this image, the more one is struck by how Warren has managed to navigate the questions of what we want from women in power, while seeming to avoid them altogether.

Warren’s “backstory” is well-known. She came from a working-class family. Her father was a janitor; her mother stayed at home. When her father had heart trouble, Warren’s mother took a job answering phones. Warren herself took a job as a waitress. Her parents encouraged her to attend college, and she received a debate-team scholarship to George Washington University. But she left that school to marry her high-school boyfriend, who worked in Houston. After graduating from the University of Houston, she taught disabled children in the public school system until she had a child herself and became a stay-at-home mother. She was dissatisfied, and friends convinced her to go into law. After graduating from Rutgers School of Law in 1976, she stayed home with her children, working on wills and real-estate closings from home. But when Rutgers offered her a teaching position – “someone didn’t show up to teach a class,” she later explained – she accepted. In 1978, Warren divorced.

In 1979, she did the bankruptcy study that would come to define her career. She visited bankrupt families, “to prove,” in her own words, that “they were all big cheaters.” What she found was that they’d simply been struck by circumstances beyond their control, such as divorce or severe illness. This obviously resonated with her own life story. And so she devoted her career to fighting on their behalf.

This is a classic bootstraps story. But it is also a deeply female story, and one that is emblematic of Warren’s generation – the first generation of middle-class women to fully enter the workforce.

Our popular image of these women looks like Hillary Clinton: ambitious, competitive, feminist and professional to the point of slickness, largely because they had to be in order to survive in an era when a professional woman was considered odd or offensive. But this attitude wasn’t universal. Many women looked a lot like Warren: initially sticking to the traditional plan for women’s lives, but adjusting slowly and inevitably to the new reality, in which they could have meaningful careers after marriage. These women often found (as Warren did) that they were actually talented, in ways that the traditional plan never demanded.