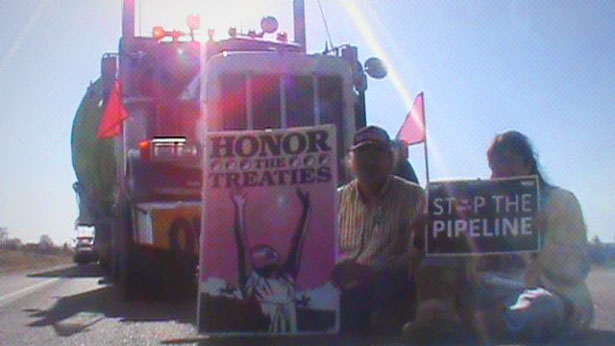 Pine Ridge Reservation residents sit in the middle of the road blocking tractor-trailers carrying mining equipment from passing through the reservation. (Photo courtesy of Andrew Ironshell via Indian Country)

Activists in Texas and a South Dakota reservation are fighting a fast-growing industry.

The southern leg of the tar sands pipeline didn't cross any international borders, and so didn't need White House approval--but it has sparked local resistance.

While Washington lobbyists continue to push for approval of the Keystone XL pipeline, activists have taken the fight to their backyards.

In January, President Obama rejected Alberta-based TransCanada’s proposal to build a pipeline from Canada’s tar sands to refineries on the Gulf of Mexico. But in February, the company announced that while it reapplied for a permit, it would go ahead with construction of the pipeline’s southern leg. This project didn’t cross any international borders, and so didn’t need White House approval–but it has sparked local resistance.

That’s how the oil giant found itself in a legal battle with a farmer outside the town of Direct, Texas. Julia Trigg Crawford owns 30 acres along the pipeline’s route, and – after rejecting a $20,000 offer from TransCanada–requested a restraining order to prevent construction on her property. She has won a court date in April to argue that TransCanada lacks standing to declare eminent domain. In an e-mail, Trigg Crawford said a decision last year by the Texas Supreme Court put “the burden of proof … on the pipeline. We feel good about our case.”

On March 5, about 75 Lakota Indians blockaded two trucks carrying tar sands equipment that had overwhelmed a two-lane highway through the reservation. After a six-hour standoff, tribal police arrested five activists, but the group declared victory when the trucks were escorted to the edge of the reservation. Though the trucks were not TransCanada’s, Lakota activists object to the use of tribal roads to transport equipment for tar sands oil – which is opposed by both U.S. and Canadian tribes – on the grounds of sovereignty. They say that Keystone XL and other pipelines jeopardize their water resources.

JR LaPlante, South Dakota’s Secretary of Tribal Relations, claims that the trucks did not need permission to pass through the reservation. But Tom Poor Bear, vice president of the Oglala Sioux Tribe’s Executive Board, said that the overweight trucks should have paid fees to the tribe.