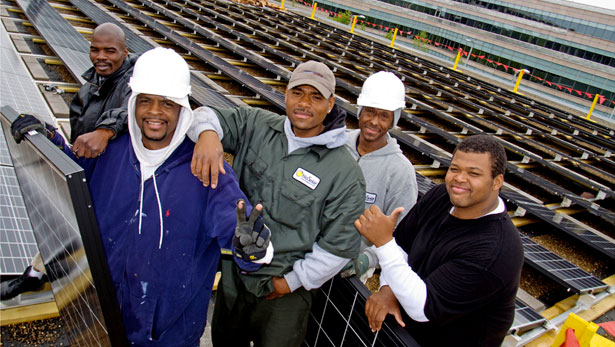 Are Co-ops the Answer?

Around the world, people are democratizing the workplace.

Governmental support for co-ops is based on the principle that they can create employment as part of a mixed economy, most often in sectors where capital has retreated.

Long before the Occupy movement sparked renewed protest of rising inequality, another global movement was quietly engaged in building a more democratic economy. From coffee growers in Kenya seeking a fair market price to worker-owned green businesses reviving the American Rust Belt, cooperatives are helping to spur a reinvention of work in a period of worldwide recession.

Globally, an estimated 1 billion people are members of cooperatives, and many believe that the scope of worker- and member-owned enterprises across the world represents a revolution already in the making. With combined earnings rivaling Canada’s GDP, co-ops could be the fastest-growing business model by the end of the decade. To promote awareness of their potential, the United Nations has declared 2012 the “International Year of Cooperatives.” Cooperative organizers, though they have generally worked on a separate track from protest movements, have called on Occupy and other mass movements to help build “an economy worth occupying.”

“It was really serendipitous that the ‘Year of Cooperatives’ happened at the same time as the Occupy movement,” says Cheyenna Weber of SolidarityNYC, a group that links social movements with “solidarity economy” initiatives. “There’s so much attention to this because people are intimately aware that the economic crisis is not going away on its own … they’re starting to get serious about doing it themselves.”

But do the swelling numbers of cooperative businesses constitute a force capable of transforming the broader economy? Governmental support for co-ops, though increasing at the behest of the U.N., is based on the principle that co-ops can create employment as part of a mixed economy, most often in sectors where capital has already retreated. And though most co-ops follow a set of seven principles – among them open membership, autonomy and concern for community – there are significant differences in how directly members or workers participate in decision-making and how explicitly they engage with broader economic justice movements.

Moreover, because growth-oriented cooperatives must continue to compete in a capitalist market (though the Evergreen cooperatives in Cleveland have been able to make use of a quasi-public market that draws on the purchasing power of local hospitals and universities), contradictions often emerge between the enterprise’s business practices and the values it espouses. While the Mondragon cooperatives in Spain’s Basque region – often considered the most successful example of worker-owned enterprise – have been hailed for their collaborative handling of economic downturn, protecting jobs at home has necessitated an expansion of their operations overseas. Today, the group has more subsidiaries abroad than actual cooperatives, and uses a two-tier system of membership in which nonmembers are not eligible to vote or share in other benefits enjoyed by members. In January 2011, one of Mondragon’s appliance factories in Poland became the target of a go-slow strike from workers fighting stagnant wages and the use of temporary workers.

Elsewhere in the world, worker-owned enterprises have also struggled with identity crises: Argentina’s famous occupied factory movement has suffered divisions between those factories that seek legal recognition from the state and viability within a market economy and those that have maintained an anti-capitalist stance and attempt to further the spread of occupations.

Though cooperatives represent a promising means of building new economic models, many activists are quick to point out that the old ones aren’t going to disappear without a fight. For this reason, Weber says, her group’s early efforts to engage with Occupy Wall Street (OWS) were sometimes marked by distrust. “Certain people are really attached to the idea that cooperatives aren’t radical enough,” she says. “But there’s a tension: You have to build something, and you also have to create space for it to be built. We’re looking for a way to push our vision as far as we can within existing economic models.”

Within OWS, New York activists have started two co-ops – a screen-printing guild and “OccuCopy,” which provides printing and designs for progressive groups – and are in the process of starting two more.

But beyond activists starting their own co-ops, the model holds potential because the number of individuals involved in workplaces that are partially or fully employee-owned now greatly exceeds membership in private sector unions. Given this fact, Gar Alperovitz, author of America Beyond Capitalism, notes that activists could also play a greater role in organizing within existing cooperatives and supporting workers’ efforts to become owners. After winning a reprieve of their plant’s closing with support from local labor groups and Occupy Chicago in February, the United Electrical workers who famously occupied the Republic Windows and Doors plant in 2008 are now considering purchasing the plant and running it as a worker co-op. And in March, the United Steelworkers and Mondragon announced details of a plan to develop manufacturing cooperatives using a “union co-op model.” Both developments represent promising models of how traditional progressive institutions can foster initiatives for democratic ownership.

“Any serious political movement has historically walked on two legs,” says Alperovitz. “It had to involve protests, elections and demonstrations … [and]building a new direction institutionally… . We’ve got to do both.”