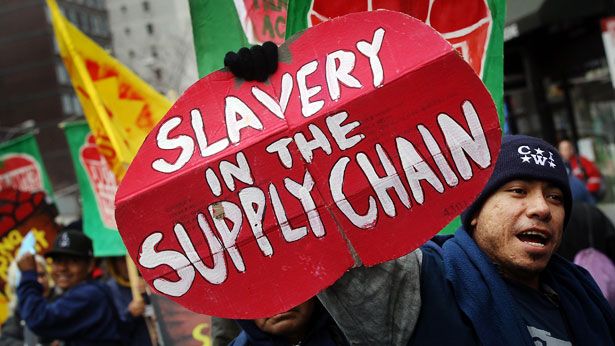 Members of the Coalition of Immokalee Workers protest outside a Trader Joe's grocery store in Manhattan on Feb. 28, 2011. (Mario Tama/Getty Images)

Does the National Labor Relations Act do more harm than good?

Some of labor's dramatic victories in recent years have come from organizations that, by choice or necessity, operate outside of the protections and prohibitions of labor law.

Republicans hate the National Labor Relations Board. But they're not the only ones. In speeches to workers and testimony in Congress in the '80s and '90s, then-AFL-CIO President Lane Kirkland repeatedly declared that union members would be better served by “the law of the jungle.” Some union presidents agreed, including Richard Trumka, who now heads the AFL-CIO. In 1987, Trumka called for abolishing both the law's “provisions that hamstring labor” and “the affirmative protections of labor that it promises but does not deliver.”

In other words, it's not just Mitt Romney who argues the National Labor Relations Board – which interprets and enforces labor law – does more harm than good.

That's in part because the National Labor Relations Act (NLRA), as amended by Congress and interpreted by the courts, bans or restricts labor's most effective tactics. The occupations of workplaces that fueled momentum for the NLRA, passed by Congress in 1935, are now illegal under it. The aggressive strikes – shutting down workplaces or even entire cities – that forged the modern labor movement have largely been replaced with strikes that are essentially symbolic. While anti-choice groups can target Planned Parenthood by pressuring the Komen Foundation not to fund it, and progressives can hurt Rush Limbaugh by calling on advertisers to drop his show, unions face unique legal restrictions on mounting equivalent “secondary boycott” campaigns that spread a struggle throughout a supply chain.

Of course, when Republican presidential candidates bash the NLRB, it's for restricting business, not unions. On paper, the NLRA actually commits the government “to promote collective bargaining” and requires most companies to recognize and negotiate with unions that win elections. It made it illegal for companies to spy on, threaten or retaliate against workers for union activism or other “concerted activity.”

But reality has proven to be a different story. “This labor law is a scam,” says Larry Cohen, president of the Communications Workers of America. “It is garbage. … It's a fucking lie.”

Getting around a failing law

And companies don't restrict themselves to these legal union-busting tactics. In 57 percent of union elections, employers threaten to shut down the worksite. In 34 percent, they fire union activists. When a union activist is illegally fired, it's difficult to prove that the firing was retaliatory – and even if the government sides with the union, generally the worst that can happen to management is being forced to reinstate the worker with back pay. This process often takes years, which can be more than enough time to quash an organizing campaign. Fred Feinstein, who served under President Clinton as the NLRB's top prosecutor, says the penalties available against employers “don't provide any deterrence” for companies set on breaking a union.

Efforts to reform this legal imbalance have been failing for decades. Where labor is succeeding, it's often in spite of or outside of the law, not because of it. Major unions have abandoned government-run elections in favor of “comprehensive campaigns” that leverage some combination of worker, consumer, media and political pressure to extract agreements from companies not to terrorize or stonewall. By blocking tracks, spilling grain, and defying a restraining order in Longview, Wash., members of the International Longshore and Warehouse Union (with help from Occupy) beat back a company's attempt to do their jobs without them. Other labor organizations – like the National Domestic Workers Alliance, or “workers' centers” – are growing and achieving victories through activism without identifying as unions at all.

“The majority of our work in Justice for Janitors was trying to figure out how to negotiate around the secondary boycott laws,” says Stephen Lerner, the architect of that campaign for the Service Employees International Union. In the Justice for Janitors campaign, labor law restricted the Service Employees union (SEIU) from targeting building owners, even though they – rather than the contractors who technically employed the janitors – were the real decision-makers.

Some of labor's dramatic victories in recent years have come from organizations that, by choice or necessity, operate outside of the protections and prohibitions of labor law. Longtime farm worker Gerardo Reyes works for one such organization, the Coalition of Immokalee Workers (CIW). The Florida-based group doesn't identify itself as a union, it doesn't seek recognition as one by management or by the government, and it doesn't negotiate union contracts. But CIW has extracted “Fair Food” agreements from the growers who directly employ farm workers. CIW has won and defended agreements with the growers by pressuring – and sometimes boycotting – well-known companies at the other end of the supply chain. In February, following a multi-year campaign, CIW achieved an agreement with Trader Joe's under which the company will only buy tomatoes from growers following “Fair Food” rules.

For farm workers under CIW agreements, says Reyes, “it is better as it is right now” than it would be under the NLRA. “Would we be better off if workers in Florida or in the entire nation were covered? It's hard to tell, because that's not our reality … so we just work with what we have.”

Others argue that stripping away labor law would leave unions far worse off – not because current law removes the need for aggressive worker activism, but because withdrawing the formal protection for union activity would make such activism much harder to pull off.

“If we took away the NLRA right now,” says Cornell University Labor Education Director Kate Bronfenbrenner, labor “would lose the protections that they do have when employers try to break unions.” While harshly critical of the current labor law regime, Bronfenbrenner suggests that labor leaders may use it as a scapegoat in an era of declining unionization. “It is not like unions are using the power they have” under current law, says Bronfenbrenner, who thinks labor should aggressively build coalitions, mount anti-corporate campaigns and nurture workplace activism.

Yet the fact is, if a union wanted to test its luck with fewer legal restrictions on strikes and boycotts and no legal right to recognition or negotiations, it could do so right now by legally dissolving itself and re-constituting as something more like the CIW. Historian and New Labor Forum editor-at-large Steve Fraser argues that the downside of the NLRA may be less in the explicit restrictions it enforces than in the way its existence has “locked the trade union movement into a juridical way of proceeding” and made it “doubt other tactics.”

The law is unlikely to change, argues Lerner, as long as politicians “think the consequence of not having labor law reform is there's no conflict” with the powers that be (both corporate and political). “We're more likely to get labor law reform if we're out there mass organizing the private sector and demonstrating the need.” To fix the law, he argues, we need conditions like the ones that birthed it: hundreds of thousands of workers pushing against – and beyond – the limits of current law by organizing, occupying or going on strike. It takes “ammunition,” says Lerner, “to prove … there's a crisis that needs to be fixed.”