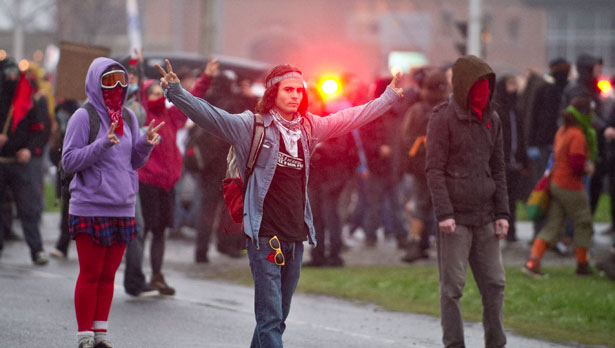 Students in Quebec have sustained the longest student strike in the province's history—and they are beginning to win results.

Though high-quality, low-cost education is fast becoming a relic, militant student protests are very much alive. This year marked the first time students in the world-renowned University of California system contributed more to their education than the state, a fact that has been met with demonstrations, boardroom occupations and a detailed proposal for free up-front tuition to be financed through repayments proportional to students’ income after leaving school.

While activists in the United States have struggled to stem the tide of disinvestment in public education, students in Quebec have sustained the longest student strike in the province’s history – and they are beginning to win results.

Protests began in the spring of 2011 after the Quebecois government announced annual tuition increases of $325 for the next five years. Tuition costs have already increased by 30 percent over the last five years, and the new hikes amount to an additional increase of 75 percent.

Since last winter, more than 150 student unions have voted to strike, and nearly 175,000 Quebec college students have boycotted classes on campuses across the province. On March 22, in the biggest demonstration thus far, 200,000 protested.

In April, the unions won a meeting with Education Minister Line Beauchamp, who agreed to consider student plans for alternative financing. Though negotiations broke down after two days when the minister tried to exclude the largest of the striking student groups – Coalition large de l’Association pour une Solidarité Syndicale Etudiante (CLASSE) – for allegedly violating a 48-hour civil disobedience truce, the provincial government has offered to spread the tuition raise over seven years instead of five.

But students voted down the compromise offer, saying they will continue to strike until the hike is called off completely. And in a show of solidarity with CLASSE, other organizations have refused to return to negotiations unless all student organizations are at the table.

“We’re out again in the streets telling the government that we don’t like their propositions,” Martine Desjardins, president of the Fédération étudiante universitaire du Québec, told In These Times. “Instead of going into the pockets of the students and parents, we should be looking for other ways to finance education.”

Diana Rosen is a winter/spring 2012 In These Times editorial intern.