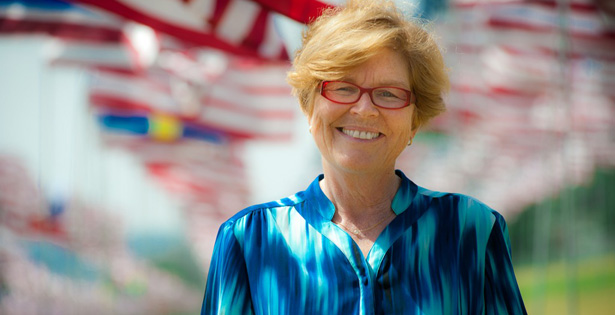 Torie Osborn, a former In These Times staffer and nationally-known advocate for gay and lesbian rights, is leading an insurgent campaign for a California Assembly seat. (Photo by Marta Evry)

In 2008, thousands of Obama campaign volunteers got fired up about electoral politics in a way they hadn’t been before. Four years later, some are now running for office themselves. But few have made a bigger splash in local Democratic circles than former In These Times staffer Torie Osborn, a nationally-known advocate for gay and lesbian rights and other progressive causes. Her insurgent campaign for a California Assembly seat has roiled the waters of Los Angeles-area liberalism and bucked the legislative leadership in Sacramento, which is circling the wagons around her main opponent.

If Santa Monica-based Osborn beats Assemblywoman Betsy Butler in the newly-created 50th Assembly district—either on June 5 or in a November general election run-off—her victory over the party establishment will be a Left Coast monument to what might have been possible, in more places, if Obama’s campaign organization (or the Democratic Party) had been serious about grassroots movement building. “There could have been 100, or even 1,000 Torie Osborns, who came out of the network of energized people trying to change American politics in 2008,” says California political consultant Paul Kumar, an admirer of Osborn’s “extraordinary campaign organization.”

Given her strong resume as a community organizer, non-profit organization leader, and influential advisor to several Los Angeles mayors, it’s been surprising to some that Osborn’s well-funded first-time bid for public office wasn’t welcomed by Assembly Speaker John Pérez and other Democratic legislators. After helping to launch this magazine as a founding staff member in the mid-1970s, she played leadership roles in the National Organization for Women, a pioneering Los Angeles clinic for HIV/AIDS sufferers, and the national Gay and Lesbian Task Force that mobilized hundreds of thousands of civil rights marchers in Washington in 1993. While serving as director of Liberty Hill Foundation, and later with United Way, she helped channel millions of dollars from well-heeled Hollywooders into Los Angeles neighborhood projects dealing with gang violence, low-income housing, and environmental issues. Osborn’s latest work, with California Calls, has focused on boosting voter registration in the state and building a coalition to end “loopholes for giant corporate property owners and the requirement of a two-thirds supermajority vote by legislators to increase taxes.”

As San Francisco lawyer and Democratic Party activist Paul Hogarth noted in a February 2012 post on the Bay Area political blog Beyond Chron, California’s just-completed redistricting process has given “Democrats an historic opportunity to pick up seats in November— and win a two-thirds majority that would make Republicans irrelevant.” Instead, Hogarth charged, “[Speaker] Pérez has diverted resources from competitive ‘swing districts’ and is instead meddling into Democratic primary fights in deep-blue seats” so he can “consolidate control at the expense of everything else.” The chances of the Democrats gaining the necessary two additional seats in both houses of the legislature has decreased, as a result.

The back-story to Butler vs. Osborn explains how and why. First elected to the assembly in 2010, after a career as an environmental group fundraiser, Butler won office by bravely defeating a Tea Party Republican in the South Bay communities of Torrance, Redondo Beach, Marina Del Rey and El Segundo. Through redistricting last year, more conservative voters were added to this electorate, but the Democrats still have a slight edge among those registered overall. Nevertheless, with full backing from Pérez (and 35 other Democratic legislators), Butler abandoned her constituents and fled from a re-match with the Republican she defeated last time (leaving that job this year to a weaker and now under-funded Democrat). From her new address in Beverly Hills, she announced a campaign for “re-election” in the re-jiggered 50th district that includes just 1.7 percent of the voters she currently represents.

Despite Osborn’s previously announced candidacy and active support from local Democratic clubs, Pérez began twisting arms to secure big donations for Butler from statewide labor and environmental PACs. Using appointed delegates, he engineered state party convention backing for Butler in February. Since last year, Pérez and other legislators have personally donated more to their carpet-bagging colleague ($88,000) than to any other Democratic candidate for the assembly. Among the commercial interests flocking to Butler’s banner is the Apartment Association of Greater Los Angeles, a landlords’ group that opposes rent control in West Hollywood, Santa Monica, and other communities that still have it. Meanwhile, back in the South Bay, the campaign of Butler’s would-be Democratic successor, Torrance School Board member Al Muratsuchi, has been largely ignored by Butler donors in the state legislature. Legislative staffers from Sacramento, who could be aiding Muratsuchi’s GOTV efforts against two GOP primary foes, will instead be dispatched, at Pérez’s direction, to the 50th district as “volunteers” for Butler.

Under California’s new “jungle primary” system, Democrats and Republicans run against each other in the same preliminary field; the top two finishers go on to a general election re-match in November. In a safe liberal district like the new 50th, that means that the competing Democratic campaigns of Osborn and Butler (or of a third possible top-tier finisher, Santa Monica Mayor Richard Bloom) will continue to consume financial resources that could have been used to unseat Republicans elsewhere. The several million dollars raised by Osborn, Butler, or their supporters will balloon to much greater spending during five-month’s of post-primary campaigning within the same electorate of 300,000.

Among those voters are AT&T workers who belong to Communications Workers of America Local 9003, headed by T Santora. He reports that CWA’s Southern California Council broke with the California and Los Angeles labor federations to endorse the “more home-grown” Osborn—after interviewing both candidates and taking into account Butler’s pro-labor voting record. “Betsy’s a nice lady,” Santora says. “But her claiming the crown as the incumbent didn’t work with our members—it just rubbed people the wrong way. If Betsy wasn’t in the legislature, nobody would know who she was. And, since she’s been there, she’s never reached out to us.”

In contrast, past legislators from the area had strong local ties to labor, tenants, consumers, environmentalists, and healthcare reformers. Santa Monica and its environs was the political base for Tom Hayden’s successful post-New Left reincarnation as a state assemblyman and, later, senator. When he was term-limited out of office, Hayden passed the torch to public interest lawyer Sheila Kuehl, who became California’s most effective legislative campaigner for single-payer health care. Both Hayden and Kuehl (Osborn’s former partner) encouraged Osborn’s run this year. According to Kuehl, “Torie absolutely fits this district. She’s been a leader of one of the most successful civil rights movements of our time. Then she made the transition from LBGT campaigning to working on issues related to poverty, homelessness, and income inequality well ahead of Occupy.”

On June 5 (and hopefully November 6, as well), voters in the 50th Assembly district will have a choice between someone who’s already part of a cozy (if dysfunctional) incumbent protection club in Sacramento and a party crasher who plans to show up there next January with no political debts to anyone except voters who want a voice, not an echo, in the state capitol.