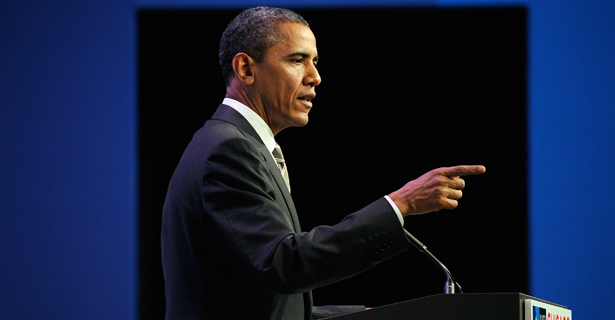 President Barack Obama speaks at a press conference during the NATO Summit at McCormick Place on May 21, 2012 in Chicago, Ill. (Photo by Kevork Djansezian/Getty Images)

The War on Whistleblowers

The Obama administration’s dubiously legal whistleblower crackdown is a genuine threat to democracy.

If you are an Obama partisan who insists the crackdown is appropriate because your favored politician is in power, take heed of the president's own warning.

When a democracy functions properly, media revelations of executive branch misconduct typically result in an investigation by the legislative branch. Watergate epitomized this healthy dynamic—illegal acts exposed by the Washington Post prompted congressional hearings and ultimately prosecutions. In other words, checks and balances functioned properly, and the system both cleansed itself of wrongdoers and rejected the Nixonian notion that no matter what a president does, it is inherently legal.

So when the New York Times this week ran the headline “Senate Will Investigate National Security Leaks About Terrorism ‘Kill List,’” it was a frightening sign that something has gone horribly wrong since the Woodward-and-Bernstein days.

Some background: Last week, the Times published an expose detailing how President Obama personally orders the execution of American citizens and foreigners that he labels “terrorists.” According to the Times, this program deems “all military-age males in a strike zone as combatants”; allows the president to be judge, jury and executioner; and operates wholly outside of the law. Indeed, the Times reports that the administration justifies such dictatorial power by insisting that the Fifth Amendment’s guarantee of due process can now “be satisfied by internal deliberations in the executive branch.”

However, the memo laying out this utterly preposterous legal theory is secret—and, of course, hasn’t been ratified by any court.

In terms of size, scope and long-term effects, this program makes the Watergate scandal look altogether quaint. You would therefore think that at minimum, even the most flaccid, rubber-stamp Congress might ask a few questions about the president’s “kill list” and the dangerous precedents it sets.

But evidently, you would be wrong.

As the Times noted in that subsequent follow-up story, Congress is focused not on shutting down—or even overseeing—the assassination program. It is instead focused on making sure those who blew the whistle on it are punished. Why? Because that will ensure that other such unauthorized programs can continue.

If you think that description of motive is overwrought hyperbole, think again. As Sen. John McCain (R) made clear, he wants revelations of illegal activity halted and possibly prosecuted specifically because “such disclosures can only undermine similar ongoing or future operations.”

This, of course, is part of a broader campaign against those who are courageously exposing illegality. As former Foreign Service officer Peter Van Buren reports, the federal government is now targeting whistleblowers for recrimination, with “the number of cases (against whistleblowers) suggest(ing) an organized strategy to deprive Americans of knowledge of the more disreputable things that their government does.” That’s right—rather than celebrating the heroes who expose wrongdoing and then stopping the illegal acts, the government is shooting the messengers in order to let the crimes continue.

If you are an Obama partisan who insists the crackdown is appropriate because your favored politician is in power, take heed of the president’s own warning. As he said a few years ago, allowing any executive to ignore the Constitution is problematic because “you never know who is going to be president four years from now.”

You also never know what other executive might make the same moves in your own hometown. After all, if a president is arguing that indictments, juries and trials aren’t necessary to execute someone, it’s not hard to imagine a governor or mayor arguing the same thing when locking people up.

That’s why this war on whistleblowers is not just some theoretical problem only for academics to debate or for foreigners to worry about. It represents a genuine domestic threat to democracy itself. If through our silence and complacency we allow that threat to expand, we shouldn’t be surprised when more of us are in the government’s crosshairs.