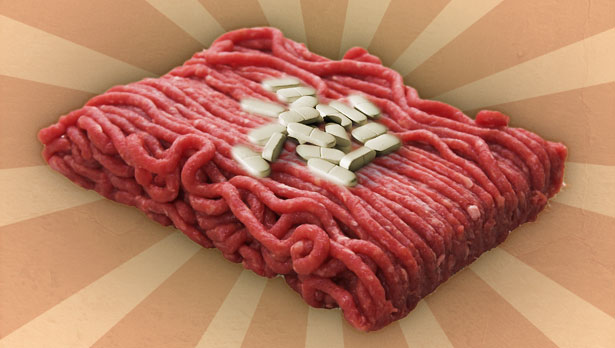 Would you like some methicillin-resistant Staphylococcus aureus with that?

The Deadly Addiction to Cheap Meat

How the overuse of antibiotics on livestock is making us sick.

America's cheap meat habit is costing more than we bargained for. The factory farming of cows, pigs, poultry and fish sucks up 29 million pounds—80 percent—of antibiotics sold in the United States.

Many illness-causing bacteria are now resistant to most or all of the antibiotics that once killed them. While the overuse of antibiotics on humans has contributed to this public health crisis, the most egregious factor in creating antibiotic resistance is the routine, widespread, greed-driven dosing of livestock. About a quarter of U.S. meat and poultry samples contain antibiotic-resistant bacteria.

The FDA, after more than three decades of dithering, has finally acknowledged a “mounting public health problem of global significance.” But, when even industry acknowledges a serious problem, an April FDA report containing “non-binding recommendations” politely asks the food industry to use antibiotics “judiciously”—and gives industry three years to figure out how to circumvent the reforms.

Antibiotics work by targeting specific bacteria, but they can leave the field open for resistant strains. CAFOs (concentrated animal feeding operations) are nearly ideal for generating resistant bacteria, and then spreading them through workers, flies, soil, air, water and, of course, food. Strains of strep; MRSA; tuberculosis; malaria; pneumonia; gonorrhea; various food poisons, including salmonella; along with other dangerous pathogens are increasingly impervious to common, inexpensive antibiotics.

The alphabet slurry of government agencies responsible for remediating this problem—FDA, USDA, CDC and others—has failed. Leaving loopholes wide enough for a cattle drive, and enforcement mechanisms as toothless as a hen, the new FDA report calls for animal antibiotic labeling to drop weight gain from its recommended uses. (Given how frequently human drugs are used off-label—i.e., for other than approved purposes—the change is beyond silly.) The report also calls for veterinary “involvement” in determining “judicious use,” including preventively treating animals that might become sick from “production practices and herd health history.” Without fundamental changes to how CAFOs raise their “product,” it is hard to imagine circumstances that would not call for preventative antibiotics.

The FDA's weak-kneed step in the industry-regulator dance perpetrates one of the oldest tricks in the book.

The Book: Corporate greed creates or exacerbates a threat to public health or welfare. Government avoids biting the corporate hand that feeds elected officials and the budget-starved or corrupted bureaucrats they hire.

The Trick: Deny there is a problem; reject causal links; foot drag on action; promise technological fixes; fail to demand or gather data and statistics, thereby ensuring that costs and solutions remain speculative; appoint committees to look into the matter; write reports; and finally, announce voluntary guidelines and/or inadequate regulations that impose few if any penalties.

“Antibiotic-resistant diseases now kill more Americans than AIDS,” Louise Slaughter (D-N.Y.) said in an April 11 statement, “and this issue needs to be treated with the seriousness it deserves.”

The FDA has failed to do that, but we can refuse to buy factory meat. Sure, you may have to pay more or eat less meat, but think of the price as a donation to ethical farmers who treat animals decently, and protect public health. Talk about a bargain.