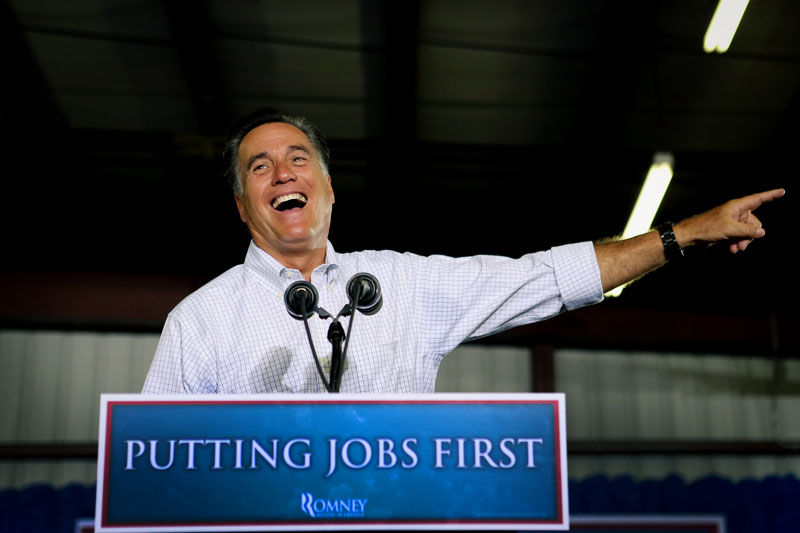 Romney’s campaign touts him as a ‘job creator.’ (Photo by: Joe Raedle/Getty Images)

Will Mitt Romney’s job-destroying past be our future?

According to a Bain Capital internal report, there is ‘little evidence that private equity owners, overall, added value’ to companies they took over.

The new bosses billed the meeting in late January 2011 as their ‘welcome’ to the 200 workers at a long-established factory in Freeport, Ill. Maybe the description reflected some dark corporate humor lost on the workers, but just three minutes into their welcome, the new managers from Sensata announced that all the jobs in the factory—which produces finely calibrated sensors for the automobile and other industries—would be moved to China or another country by 2013.

Sensata is the creation of Bain Capital, a private equity fund co-founded in 1984 by Republican presidential candidate Mitt Romney. Sensata was assembled from various sensor manufacturers in 2006, and it has continued its acquisitions even as the U.S. share of its workforce declines sharply. Bain’s strategy for this basically healthy, moderately high-tech manufacturing sector of the U.S. economy is apparently to transfer all the work offshore.

The Illinois plant was previously owned by Honeywell. Tom Gaulrapp, who has worked there for 33 years, at first refused to believe that Sensata would move the highly automated and profitable operations from Freeport, where skilled employees had developed many of the products and machinery. Then he learned more about Bain and grew angry.
“Isn’t my job worth more than another dollar in a millionaire’s pocket?” he asks. “It’s our American dream they’re throwing overboard. We don’t have problems with them wanting to make a dollar, but when is enough enough? These companies have to have some responsibility to the communities in which they’re located.”

No, they don’t—or at least, not in the world of private equity funds from which Romney hails. Despite Romney’s claim to be a job creator (the honorary title Republicans bestow on all rich people), that world is one where the extra dollar in a millionaire’s pocket is always worth more than someone’s job.

It does not matter how that dollar gets into the millionaire’s pocket. Whether through a financial sleight of hand that adds little to (or, indeed, takes away from) the overall economy; through tax breaks, subsidies or favorable government rules (or often no rules at all); or through the destruction of the lives of the less wealthy and powerful. And if the millionaire’s pocket, like Romney’s, is a secret bank account in Switzerland, the Cayman Islands, or another notorious haven from tax collectors and law enforcement, so much the better.

Thanks to the election-season scrutiny of Romney, Americans are getting a refresher course on such monetary machinations. The stage is now set for a serious, substantive debate about how the current model of American capitalism works—and how it fails.

So far, such a debate hasn’t materialized. Journalists and the Obama campaign have confined themselves to needling Romney about his tenure at Bain, irritating Republicans and a few Democrats (including former President Clinton). Polls show that these criticisms have soured some independent voters in key battleground states on Romney. In response, Romney’s campaign has alternately tried to change the subject and to deny that he was responsible for several prominent Bain-owned companies that offshored jobs, closed factories or declared bankruptcy.

But the denials grow less plausible as accounts of Romney’s relationship to Bain become more contradictory. Though he has often claimed that he left the firm in February 1999 and gave up all managerial responsibilities to run the 2002 Olympics, official Securities and Exchange Commission filings depict him as CEO, chairman, sole owner and managing director from 1999 to 2002.

Conflicting accounts at the time described him as taking a leave of absence and as working part-time after 1999, and a campaign spokesperson recently muddied the waters more by saying Romney “retroactively retired.” Several news reports, including a late-July Associated Press story, cite documents or quote associates indicating that Romney kept doing business at Bain. According to the AP, “Romney continued to oversee his partnership stakes even as he disengaged from the firm, personally signing or approving a series of corporate and legal documents through the spring of 2001.” He also met with Bain’s partners during this time to “negotiate his separation from the company”—including a generous severance package (the details of which Romney and Bain refuse to disclose).

The shifting factual claims raise questions about whether Romney is lying about his role at Bain to escape public scrutiny. After all, the more Romney is directly linked to offshoring jobs, closing a plant or pushing a company into bankruptcy, the more damage his campaign suffers.

Beyond Romney’s attempts to evade responsibility for specific buy-outs, most damning is the incontrovertible fact that the GOP presidential hopeful was a key architect of what has become known as the “Bain model.” And as president, it can be expected that he would govern the country using the values that governed Bain Capital.

David Brooks, the genteel conservative columnist for the New York Times, urges Romney not to deny or act apologetic for offshoring jobs like Gaulrapp’s. (He’s joined in this admonition by others, including liberal pundits such as Matthew Yglesias.) Instead, Brooks wants Romney to defend offshoring as central to “the entire logic of capitalism as it has existed over several decades,” and in the process “to define a vision of modern capitalism.”

It’s a debate that both Romney and Obama should engage in—possibly starting in Freeport, as the city’s mayor has urged. (Freeport was the site of a 1858 Lincoln-Douglas debate.) It’s long past time for candidates to address the fundamental question: “What’s the best model of capitalism for America?” Were that debate to happen, it would make the 2012 election among the most momentous in modern American history. (For an explanation of why such a debate is not likely to occur, see Jeff Faux’s “In the Twilight of Empire” on page 20.)

It’s hard to imagine what evidence Romney could muster to defend modern capitalism. The results of the past 30 years have not been inspiring. They include an immense shift in wealth from the working class to the very rich, near-record inequality and, for the majority of Americans, declining social mobility and growing economic insecurity. In addition, these decades have been punctuated by frequent and increasingly serious financial scandals, abuses and crises.

Romney’s vision suffers by comparison with the older capitalism of his auto-executive father, George, who ran a business that actually made products and created American jobs. George Romney also willingly disclosed 12 years of tax returns when he ran for president in 1968, which is 11 years more than Mitt has done. (On the other hand, we shouldn’t let nostalgia sanctify George Romney, who famously called United Auto Workers leader Walter Reuther “the most dangerous man in Detroit.”

The  problems with the Romney-Brooks model stem from the growing clout of Big Finance and multinational corporations, coupled with the declining influence of working- and middle-class Americans. The people have lost power to business both in the workplace, as unions erode, and in politics, as big money gains a stranglehold over the major parties. Consequently, many Americans succumb to an “all-parties-are-the-same” political apathy as the nation slides to the Right. Even when they or their neighbors are savaged by predatory employers, many middle- and even working-class Americans shrug and say that’s business as usual. What else would you expect the free market to do?

But businesses in the United States could be held to higher standards, as they once were and still are in the social democracies of Western Europe. For example, according to the dominant view for several decades, corporate managers should have only one objective: maximizing shareholder value. Why not pick a more responsible goal, such as effectively maximizing social value while still optimizing profit for long-term growth?

In a July USA Today poll, 63 percent of those surveyed thought Romney’s business background provided an advantage in dealing with the economy. But a grand debate on what kind of capitalism America needs, combined with hard-hitting reporting on Romney’s record, could turn his ballyhooed main credential—his stint at Bain—into a strong turn-off for voters.

On balance, the private equity firm’s shenanigans—or “financial engineering”—helped no one but a few parasitic millionaires, who fattened their Cayman accounts. And Sensata’s only contribution to the Freeport operation will likely be exploitation of low Chinese wages.

Neither Romney’s business experience at Bain nor his weak economic record as governor of Massachusetts offer any reason to think that he learned something useful about presidential leadership in creating jobs, especially good jobs. And his reliance on tax havens, his refusal to release his tax returns and his lack of candor about his tenure at Bain suggest not only that he tends toward secrecy, but that he has something to hide.

“We cheered Romney winning [the Republican primaries],” says AFL-CIO Political Director Michael Podhorzer. “It’s bringing to the fore all the things that have made workers poorer for 30 years. It gives workers the opportunity to vote up or down on these policies and whether they want the country to go in this direction. It’s not just about character. It’s about workers, not a dog on the roof.”

Obama’s own record, such as his failure to push for an alternative to NAFTA-style trade agreements, makes him an imperfect candidate to debate Romney on the future of capitalism. And some voters don’t see him as a strong advocate of his own views. “Mostly it seems like he doesn’t want to fight for anything,” laments Gaulrapp, a life-long Democrat who is unenthused about Obama.

But Obama defends a few core values: the idea that whether we’re winners or losers, we’re all in a financial boat together; the importance of public investment in the economy; and the need for checks on financial industry shenanigans. And he warns that Romney represents a return to the policies that created our financial crisis. Beyond supporting the proposals to shift tax incentives to keep jobs in the United States and opposing Romney’s tax giveaway to global corporations, Obama needs to articulate a view of a global economy based on raising standards of living, protecting workers and communities, and setting tough standards for multinational corporations. And with Romney as his foil, he has the perfect opportunity to attack casino capitalism and advocate tougher reform of the financial services industry, especially “shadow banking” operations such as private equity firms.

If people come to understand the real record of Bain Capital and the private equity business—and if Obama can create a persuasive vision of a better form of capitalism—it’s likely that even in a weak but recovering economy, a majority of voters will agree with Sensata worker Cheryl Randecker’s assessment of Romney: “I wouldn’t trust him to run a company, let alone a country.”