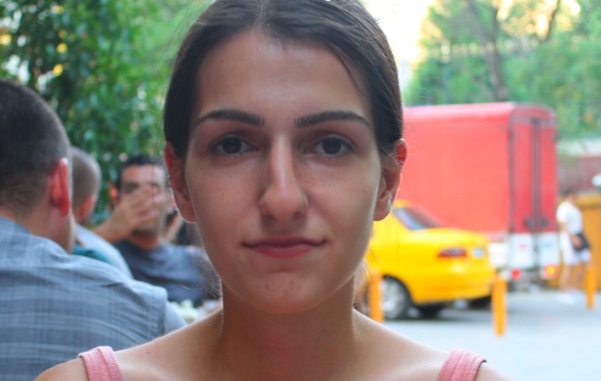 Seyma Ozcan has already spent five months in jail after the government accused her of belonging to an outlawed group. She denies the charges. (Stephen Franklin).

Many tout Turkey as a model for “Arab democracy,” but its human rights record raises troubling questions

Before prison, she was frail. But she couldn’t eat in prison, because of the food, the crowding and the mental torture of the questioning—unnerving jolts for a 22-year-old thrown in with murderers and criminals along with dozens of university students like herself.

She still can’t eat normally, but she also can’t seem to catch her breath. That anxiety started during her five months in a Turkish prison and it lingers as she awaits a court date.

“I don’t think about my future,” she says, sitting uneasily in a café here. “I got out of prison, but I don’t have a normal life.”

Long bedeviled by military coups, an intolerance for dissent, uprisings from the right and left and a worsening struggle with its large Kurdish minority and militants, Turkey is trapped by its disregard for human rights.

It’s a legacy that has put journalists, students, union members and lawyers in prison for what human rights advocates say are broadly employed anti-terrorism laws that violate freedom of expression and fair trial rights. Mostly this has meant a crackdown on those supporting Kurdish issues, but it has spilled over onto others supporting leftist issues and those involved in issues as basic as demonstrating on behalf of free university education.

More than 90 journalists have been held in Turkish prisons for most of the last year, making Turkey the world’s number one jailer of journalists. Most of the journalists come from the Kurdish news media, but a small number work for mainstream and leftist news outlets.

A student support group counts more 770 students in prison and the Turkish Justice Ministry in August said 609 students were in prison for belonging to an “armed terrorist” group and another 178 face the same charges but were not in custody.

Even defending someone facing terror-related charges has become a danger. Lawyers for persons in cases linked to terrorism have been detained, charged and prosecuted, according to a May report for the Human Rights Council of the United Nations’ General Assembly.

“This regrettably seems to be increasingly the case in Turkey,” it added.

With Turkey positioning itself for a greater voice in the region and others viewing it as a model for the Arab nations first embracing democracy, its human rights record raises questions.

“A nation that doesn’t tolerate dissenting voices cannot be a model for this region, a region where there are so many problems with minority rights,” says Emma Sinclair-Webb, the Turkey researcher at Human Rights Watch.

“It is a very serious situation,” says Rob Mahoney, executive director of the Committee to Project Journalists. “You have a whole array of laws that can be used or misused to silence journalists and intimidate a free press. We’ve seen waves of arrests of journalists, particularly Kurdish journalists, which is unacceptable in a democracy.”

When the ruling AK Party (Justice and Development) came to power in 2002, it vowed to undo many of the legal knots Turks have lived under since the nation’s founding. And, initially, they lived up to their promise.

But the right-leaning, religiously conservative party’s appetite for such change has apparently slowed in recent years. Some of it may be blamed on its deepening and bloody entanglement with Kurdish militants; some on its preoccupation with sweeping away the old military elite and its allies who watched over Turkey for decades; some on the inability to root out old ways in its courts and police; and some on its disinclination to give up the power it inherited.

How serious is the problem?

The European Court of Human Rights offers a good measure of the situation. The court’s records show that Turkey accounted for the greatest number of its judgments among its 47 member nations in dealing with freedom of expression violations since 1959: 43 percent of all cases. Turkey also led in the number of judgments involving the right to a fair trial and protecting one’s right to liberty and security, the records indicate.

Such a record matters as the European Union decides whether to admit Turkey to it ranks.

An extensive examination of Turkey’s human rights situation issued in January by the Commissioner for Human Rights of the Council of Europe didn’t help. Turkey received praise for its progress but also blistering criticism for ongoing problems.

The report also pointed to excessively long trials and cases lasting “for more than 10 or even 15 years.” It questioned prosecutors’ “long-established” practice of arresting persons before collecting needed evidence against them. It worried about of the “ineffectiveness” of legal proceedings against security forces charged with serious human rights violations. And it challenged the prosecution of persons for non-violent statements matching those of terror groups.

Turkish officials welcomed the report’s praise for their progress, but bluntly replied that it was not balanced, had relied on unconfirmed information, and they challenged a number of the findings.

Basak Cali, a senior lecturer in human rights and international law at University College London, agrees that Turkey has made advances. “But,” she adds, “there are still many significant problems.” And in some cases, the situation is “significantly worse,” she says, pointing to a record number of persons, among them journalists and students, in pretrial detention.

Turkish officials staunchly insist, however, that they are making progress.

They point to a recently enacted judicial reform, which they say will ultimately release about 10,000 persons now in prison, but not convicted of crimes. They say that up to 3,200 persons now serving time should also be released as part of the reform.

Looking ahead, they say the government will bring up another round of reforms to Parliament in the fall. One proposed change would protect those who speak out on controversial issues, but are not linked by any evidence to violence or a violent organization. Human rights advocates say this is a common reason currently for many arrests.

“Turkey is making an effort to rightly balance between the need to expand the freedom of speech and preventing the praising of violence and terrorist propaganda,” said a Ministry of Foreign Affairs official, who asked not to be named, in an email.

But human rights advocates and others are skeptical.

“We’ve talked to the government about human rights for years and I’m quite dispirited,” says Sinclair-Webb of Human Rights Watch.

The government’s intentions aren’t clear either to one of Seyma’s instructors at Bogazici University in Istanbul, one of Turkey’s elite state-run universities. It troubled him that her only misdeed, as far as he can tell, is belonging to a leftist student group and applying for an internship with a Kurdish news outlet. When arrested in December 2011, she was charged with membership in the outlawed Revolutionary Headquarters group, according to news report.

Awakened to the problem of arrested students, he shared his concerns about Seyma with other faculty and has kept up to date on her situation. But he’s been cautious about becoming too public with his concerns for fear that it could hurt him with officials.

“What we call academic freedom is definitely not what it was a few years ago,” he says, adding that his name couldn’t be used in this article.

Ali Kerem Saysal, another professor at the university, has no qualms, however, about speaking up about arrested students. He is one of the founders of a new group called Don’t Touch My Students. It only has about 10 members, he says, but it has drawn large numbers to its gatherings.

A controversial 11-year prison term this Spring for one student at Galatasaray University in Istanbul on what many considered skimpy evidence jolted persons like himself to speak out. He wishes more faculty would take part, but that hasn’t been the case.

“I don’t act out of optimism. Rather, what we have to do is quite clear,” he says emphatically. “And maybe there will be a change,” he adds almost as an afterthought.

When a dozen police stormed the apartment where Seyma was living with her boyfriend early one morning last December, she was stunned. After they were told about the charges several hours later, the two denied belonging to the organization, she says.

For the next four days she was questioned by security officials two or three times a day and sometimes at night, and each time, she says she repeated her disavowal of violence. She didn’t see a lawyer for the first two days.

During the interrogations, she was asked why she had attended protest meetings and why she had called the Kurdish newspaper for a job, she says.

She was sent off to a women’s prison and cell where there were 25 beds for 30 women and where hot water flowed only three days of the week. While in prison she married her boyfriend. They hadn’t planned on that, but it was the only way she could see him, she explains. He was released in August pending their trial.

What will happen next?

“In Turkey,” she says, “you don’t know when you will go to court or what the court will do or what the prosecutors will do.”