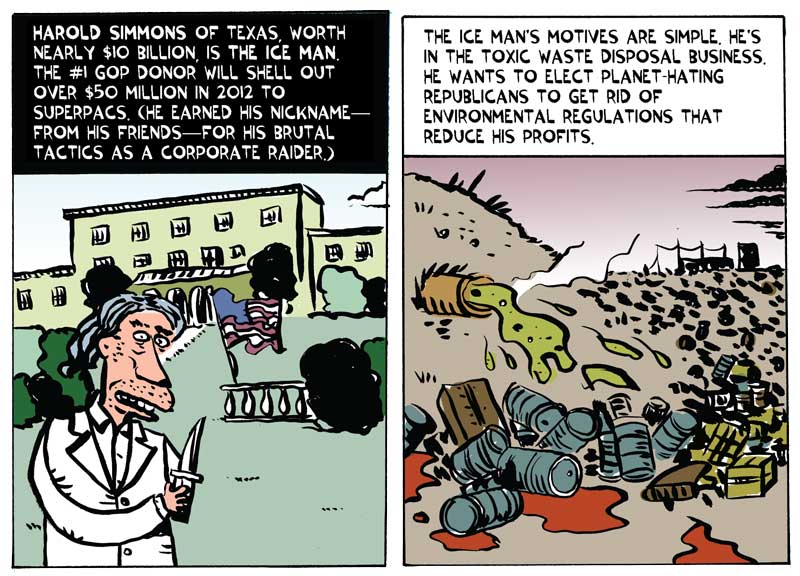 What is the Ice Man up to, giving each one of these guys enough money to beat the hell out of the other?

When the Ice Man told Karl Rove, “I’m in,” he wasn’t fooling around. The Ice Man, Texan Harold Simmons, is one of the largest donors to the Republican Party. The Ice Man, who got his nickname for his merciless, cold-hearted tactics as a corporate raider, said he expects to give $36 million to Republican candidates in 2012. Add in what he’s giving Karl Rove’s Super PAC and it goes to over $50 million for the year. Of course, that’s peanuts for a man worth more than $7 billion.

In the Republican primary, Simmons gave $1.2 million to presidential candidate Rick Santorum to attack Mitt Romney. And he gave nearly a million dollars to Restore Our Future, the pro-Romney Super PAC, to buy ads to attack Newt Gingrich. He gave $1.1 million to Newt Gingrich to attack Santorum and Romney. He gave their opponent Rick Perry’s Super PAC yet another million to let the governor of Texas make a jackass of himself on national TV.

What is the Ice Man up to, giving each one of these guys enough money to beat the hell out of the other? I can’t claim to know everything in the Ice Man’s head. He’s playing multidimensional chess when I’m playing checkers. But, at the least, I know he’s teaching all the candidates to heel, roll over and beg.

He certainly didn’t give a rat’s ass about the candidates’ positions on the hot-button issue of the primary, abortion and contraceptives. Simmons thinks all of them are nuts: He’s pro-choice. It’s not about philosophy, but, as Michael Corleone says in The Godfather, “It’s just business.”

His $50 million for Rove and Republicans is less than 1 percent of his wealth. As his candidates’ tax and business proposals could boost his net worth by $2 billion, his return on investment could top 4,000 percent on just those two pieces of real estate called the White House and the Capitol. Not bad.

One investment, the $1.2 million Simmons put into Gov. Rick Perry’s campaign for president, is already paying off. The key for Simmons was that Perry’s run for president belly-flopped. The Ice Man is no fool: He knew his fellow Texan was a putz, and would crash and burn in the first presidential debates. And if that governor ends up back in the statehouse in Texas, that governor knows who’s pleasured his campaign treasury.

Perry’s loony run for the White House, once finished, meant that Perry remains governor of Texas, exactly where the Ice Man needs him. Why? The Ice Man’s Waste Control Specialists LLC wants to create a 20-square-mile toxic dump in West Texas. But it was a dump without a hole. The business zoomed in value once the state of Texas gave Simmons a hole for his waste dump. Permits for the crapola were issued despite objections of the state’s own expert panel, which said the hole was too close to the giant Ogallala aquifer, the very same water source that Obama tried to save by moving the XL Pipeline. It’s a drinking water source for eight states.

Nevertheless, the political hacks on the Texas Commission on Environmental Quality appointed by Perry overruled their experts and in 2008 and 2009 issued the Ice Man the licenses for his dump.

In March 2012, after flunked-out presidential candidate Perry skulked back to the Texas governor’s mansion, another one of his agencies approved Ice Man’s superdump to take in nuclear waste. Now, toxic dumps have a habit of leaking and causing cancers. If this one leaks it could poison and irradiate the Ogallala.

And that leads to lawsuits. No problemo, pardner! Perry supported a voter referendum and lobbying campaign, backed by $2 million from a group called Texans for Lawsuit Reform, which virtually eliminated the ability of Texans to sue for pain and suffering if they are dying of cancer from negligently leaked toxins. The $2 million for the “reformers” came from the Ice Man.

For the Ice Man Simmons, this is a twofer. Simmons controls NL Industries, a name that beats the hell out of “National Lead,” its old name, whose most well-known product was the popular Dutch Boy paint. The paint’s brilliant colors were attributed to its special ingredient: lead.

The Ice Man took over the company in 1986. But there was a threat to the Ice Man’s cash kitty in NL. According to the industry’s own research, lead-based paint causes severe mental retardation in poor neighborhoods where the poison is peeling off the walls.

The key for Simmons to keep his billions out of the hands of NL’s victims is “tort reform”—Corporate America’s campaign to take away an injured person’s right to sue.

Simmons appears to have bought himself protection from lawsuits by the victims of his enterprises in Texas, and he’s made clear he wants to take his push for protection from his victims on the road to all 50 states.

When the lead-head isn’t fighting brain-damaged children, Simmons is fighting taxpayers. Simmons’ company has refused to pay its share of the $500 million a year it costs to remove lead-contaminated paint from schoolhouses.

The regulations that banned lead from paint in the 1970s prevented thousands of cases of mental retardation. This makes Simmons crazy: he wants to eliminate all government environmental regulation—a philosophy you could call “Lucrative Libertarianism.”

The Ice Man’s long-term goal is to eliminate the Environmental Protection Agency. Meanwhile, in 2012, Rove’s dogsbody, Rep. Tim Griffin (R-Ark.), sponsored H.R. 4078, the Regulatory Freeze for Jobs Act, “to provide that no agency may take any significant regulatory action until the unemployment rate is equal to or less than 6.0 percent.”

But what’s the use of a bill without a Congress to pass it, or a president to sign it?

As Simmons’ ally corporate superlobbyist Grover Norquist put it, they just need a president “with enough working digits to handle a pen … to sign the legislation that has already been prepared.”

Prepared by Grover and the Ice Man.

And that’s what the $50 million in donations is for.

Excerpted and adapted from Billionaires & Ballot Bandits: How to Steal an Election in 9 Easy Steps (Seven Stories) by Greg Palast. © 2012 by Greg Palast, Ted Rall and the Palast Investigative Fund.