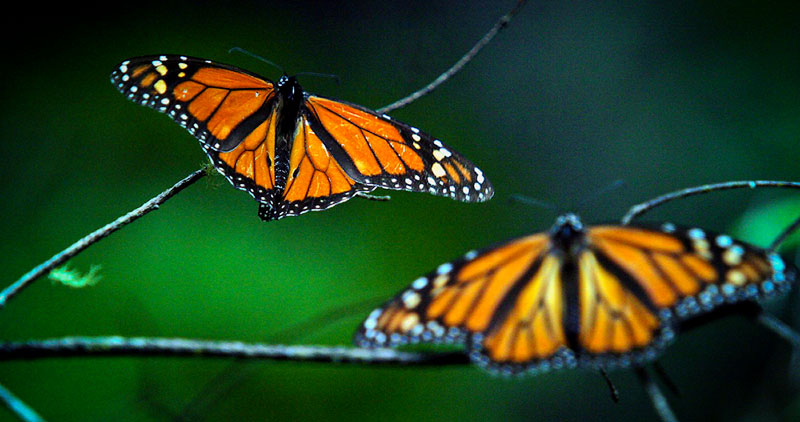 Fall of the Monarchs

Can we save North America’s most beloved butterfly?

A University of Minnesota study linked the monarch decline to glyphosate, aka Roundup. In the United States, 94,000 tons of the herbicide are applied each year.

As a girl growing up on the outskirts of Cedar Rapids, Iowa, Debbie Jackson looked forward every May to hopping on her bike, pedaling to nearby fields and collecting the just-laid eggs of monarch butterflies from milkweed plants. “I saw countless orange-and black monarchs flitting through the wildflowers then, and could find their eggs, take them home, and hatch them easily,” says Jackson. “But that was 40 years ago, before the monarchs started to die.”

Today, living on 10 acres outside Davisburg, Mich., Jackson grows four types of milkweed in a “butterfly garden” and fills her house with plastic containers in which she hatches butterfly eggs. Jackson spends more time on butterflies than on her part-time finance job because she is alarmed by the monarchs’ population decline. Scientists say that the downfall has been caused in small part by environmental factors, but mostly by two types of human meddling: the use of herbicides that are killing off milkweed plants in the United States, and the illegal logging of the pine and fir trees on which the monarchs make their homes for five months of the winter in central Mexico.

Jackson, a volunteer for Monarch Watch, is part of a grassroots coalition of entomologists, conservationists and activists on both sides of the border. Their efforts to save the monarchs include a number of strategies to slow or halt U.S. herbicide use and Mexican logging.

“Monarch butterflies warn of what might lie ahead for other wild creatures affected by overfarming and deforestation,” says Chip Taylor, professor of insect ecology at the University of Kansas in Lawrence, who founded Monarch Watch in 1992.

“It’s clear that this year’s total population is down, and that the overwintering group that just arrived in Mexico is among the lowest ever recorded.”

The devastating reduction started 15 years ago—very recently in the monarch’s long history. An estimated 250,000 years old, this species predates modern humans by 50,000 years and has until now enjoyed a hardiness that belies its 4-inch wingspan and 0.2-ounce weight.

Monarch butterflies feed on the nectar of a variety of flowers, such as the coneflowers and daisies that Jackson grows in her garden. They lay their eggs on a once-ubiquitous plant: the light green, fuzzy-leafed milkweed, named for its rubbery, milk-colored sap. Because monarchs multiply in such vast numbers, they have until now been able to winter safely in just one 60-square mile area, clustering on south-facing slopes that are 10,000 feet above sea level in the mountains of Mexico’s Michoacán state.

Every March, monarchs wake from their winter slumber, warm their wings in the spring sunlight, and begin the frenzied business of mating. As swarms of them start flying northward, the females lay their eggs on milkweed plants that the hatchling caterpillars will eat. New butterflies emerge from cocoons and begin to trek north, mating and laying eggs by the billions. The monarchs fan out across the United States and up to Canada, where the fourth generation, descended from the hibernating population in Mexico, turns around and starts flying south to Michoacán at an average rate of 50 miles per day.

From June to September, in the three short months that they migrate from Canada to Mexico, the monarchs journey 3,000 miles. They start their journey flying solo, then gather in a swarm that is 50 miles wide and casts a shadow as it crosses the U.S.-Mexico border.

Researchers have yet to determine what guides the monarchs—whether it is smell, water, sunlight, magnetic fields, or some hardwired form of butterfly radar. All scientists know is that the monarchs know where to go. If you catch and crate a large group of them, fly them in planes hundreds of miles off course and release them, they will still head straight to Mexico.

Mexicans consider the butterflies to be the souls of their departed ancestors and every October welcome las monarcas with boisterous festivals. But this year fewer butterflies have showed up for the party. They cover just 7 acres of forest versus the optimum 15, with a growing number dying right after arrival. One by one, they tumble lifeless from the tall trees. Their delicate, bright wings carpet the forest floor.

Suburban sprawl and recent droughts both threaten the milkweed that is essential to the monarchs’ survival. But scientists say most of the monarchs’ downfall is likely tied to modern-day agricultural practices.

In March, a University of Minnesota study linked 10 years of monarch decline to glyphosate, the most popular herbicide in the United States, used in brands such as Monsanto’s Roundup. An estimated 84,000 tons of glyphosate are applied annually to soybeans, corn and other U.S. commercial crops. On top of this comes 3,600 tons used in the home and garden sectors, and 6,800 tons used by private businesses and government agencies.

Though glyphosate may be a boon to farmers and landscapers, it is killing milkweed—normally among the hardiest and most stubborn of plants—in record numbers. One recent study found that the milkweed population in the Midwest plunged 58 percent from 1999 to 2010, and that as a result, monarch egg production plummeted 81 percent.

The butterflies’ winter resting grounds are also under threat. Michoacáns near the state’s 12 butterfly reserves often turn to illegal logging because they have few other sources of income. It can take an illegal logger less than an hour to chop down a pine tree that has been sheltering monarchs for centuries. “From 1986 to 2006, 20 percent of the forest reserves in Michoacán were disturbed,” says Maria Isabel Ramirez, a geographer and conservationist from the National Autonomous University of Mexico. “More than 60 percent of this loss is tied to illegal extractions.”

To counter this, the World Wildlife Fund, a Washington, D.C.-based nonprofit, pays Michoacán villagers to patrol forest reserves and protect them from illegal logging. Similarly, Ecolife, which is based in Escondido, Calif., provides villagers with newfangled stoves that require less pine and fir wood than traditional ovens do. And the Roseville, Minn.-based Monarch Butterfly Fund plants 30,000 seedlings per year in this threatened forest region.

In the United States, butterfly lovers are offsetting the milkweed die-off by building “monarch way stations,” such as the milkweed gardens that are now growing everywhere from a convention center roof in Pittsburgh to Debbie Jackson’s backyard in Davisburg, Mich.

Now that Jackson’s butterfly gardening season has ended, she is busy giving butterfly talks at local schools, and making the rounds at community groups and churches, inspiring others to adopt some of the 1,500 monarch eggs that she will give away next summer. Indoor hatching boosts the caterpillars’ survival rate, a grim 2-to-5 percent in the wild, to a robust 90 percent.

“I want everyone to witness the miracle that I did as a child,” says Jackson. “When you watch a newly hatched monarch hang from your finger and unfurl its wings, you can’t help but dedicate yourself to this creature’s survival.”