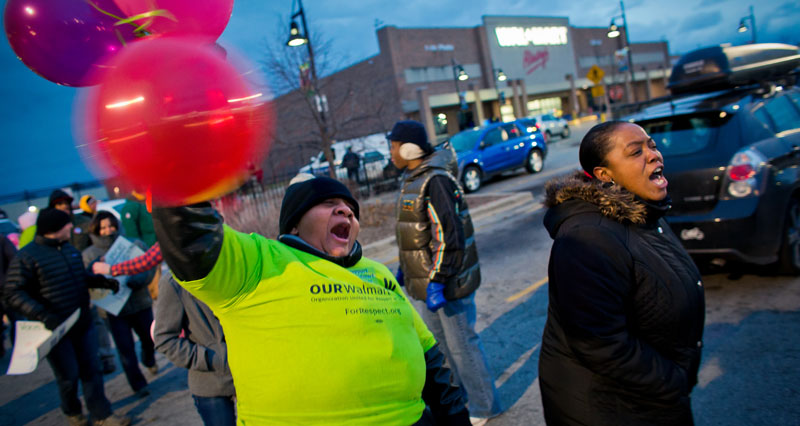 Employees and their supporters protest outside a Walmart store in Milwaukee, Wisc., on Nov. 23, 2012 (Photo by Darren Hauck/Getty Images)

In the rare times when Walmart could not crush a union drive, the company shuttered stores or departments rather than allow unionization.

On Black Friday, the biggest shopping day of the year, bargain hunters trying to enter 1,000 Walmart stores around the country had to maneuver through rallies and picket lines. Tens of thousands of protesters turned out at the urging of a year-old worker association, Organization United for Respect at Walmart (OUR Walmart), to support roughly 500 workers who walked off their jobs that day, fed up with what they saw as Walmart’s inadequate pay, disrespectful working conditions and illegal punishment of workers who speak out. “I’m pumped up,” said Tyrone Parker, a night-shift stocker, as 250 protesters marched around a Walmart store in Chicago’s South Side. “Somewhere, somehow, down the line, it’s going to make a big difference.”

The nationwide action was one step in what promises to be a long march toward securing a voice for workers at the vehemently anti-union Walmart. But at a time of growing unrest among low-paid workers, the Walmart campaign could help the labor movement take a giant leap forward.

Walmart, the world’s largest private employer, heavily influences standards for vast swaths of the American economy, from retail to logistics to manufacturing. Over the past few decades, Walmart’s competitive power—a combination of size, technology and cut-throat personnel policies—has played a role in dramatically reducing American retail workers’ average income and unionization level (from 8.6 percent in 1983 to 4.9 percent in 2011). Left Business Observer economist Doug Henwood calculates that real wages for retail workers—who make up 10 percent of the workforce—have fallen nearly 30 percent since their 1973 peak, three times the drop of all hourly wages. Reversing that wage trend will be essential to revive the economy and reduce soaring inequality.

In taking on the retail behemoth, OUR Walmart—supported by the United Food and Commercial Workers (UFCW) and its labor-community alliance, Making Change at Walmart—is testing unconventional strategies. The organization is looking backward for inspiration, to neglected union strategies of the 1930s and socially disruptive actions of the civil rights movement, and forward, to the possibilities opened by the Internet and social media.

Such innovation is sorely needed. For two decades, the UFCW has crossed swords with Walmart, using hostile publicity campaigns and occasional union representation elections. But in the rare times when Walmart could not crush a union drive, the company shuttered stores or departments rather than allow unionization.

“When the [National Labor Relations Act] was passed [in 1935], nobody imagined a company like Walmart,” says Making Change at Walmart Campaign Director Dan Schlademan. “The antiquated aspects of the law play into Walmart’s hands.” The union recognition process under the NLRA permits employers such as Walmart to vigorously, even ruthlessly, campaign against unions and suffer only minor penalties for law-breaking.

So organizers at Walmart devised a new strategy. “We got together a group of Walmart associates,” many of them veterans of earlier campaigns, says Schlademan. “What people came up with was, ‘Let’s stop waiting for the government or Walmart to say we can have an organization. Let’s build an organization now and begin to create a voice for Walmart workers as they face real issues now.’”

The result was OUR Walmart: not a union seeking recognition at a single store, but a nationwide network of hourly associates seeking to pressure the retail giant into better companywide practices through collective action. “Like all movements for change, not everyone is involved, but there’s a committed core,” says Schlademan.“[As in the] civil rights movement, the courageous ones are standing [up], then others stand with them, and bigger things are bound to happen in the future.”

OUR Walmart’s structure hearkens back to what historian Staughton Lynd called the “alternative unionism” of the 1930s. These workers regarded everyone as a leader, acted locally without waiting for national union organizers and created local unions that were linked in horizontal solidarity rather than through subordination to a central hierarchy. Some workers formed non-union associations that often became more like a union over time. Others formed “minority” unions without waiting for majority support; employers were still obliged to bargain with these unions for their members’ rights. Now-retired labor law professors Clyde Summers and Charles Morris argue that even under the NLRA, such unions—now rare—have the same legal rights as majority unions.

OUR Walmart strategists describe their organization as “open source,” meaning that it provides resources for workers to self-organize, rather than waiting for a paid staff organizer. The Internet and social media have proven crucial in this effort, says Schlademan. “We’re trying to create as many pathways as possible for people to self-organize,” he says. “If we tried to do this in the conventional way, we’d never get there.”

Take the case of Janet Sparks, a Walmart retail worker in Baker, La.

Angry that the company was taking away benefits and making schedules unpredictable, she “kept searching constantly” for ways to fight back, she says. “I never gave up on trying to connect with all the associates across the country. One day I stumbled upon OUR Walmart [online]. I immediately contacted them and became a leader.”

Besides enabling workers like Sparks to organize her co-workers, the emerging organizations also have a somewhat freer hand than most unions to take direct action, including strikes, both quick and extended. (Union contracts often limit workers’ right to strike, which is otherwise protected by U.S. law.)

With union membership down to 11.8 percent of the workforce (6.9 percent of the private sector), and labor law reform stalled by Congress, the union movement must find strategies that can tackle big companies and industries as a whole.

“We’ve got to expand our notion of the labor movement to include collective action by workers, wherever it is,” says Stewart Acuff, former AFL-CIO director of organizing. “We need big fights now in America. It’s less important that we win than that we fight.”

The Walmart campaign is leading the fight not only against a powerful corporation but also against an entire degrading “system of work” in sectors such as retail, says Change to Win Executive Director Tom Woodruff. OUR Walmart joins a host of smaller campaigns by workers in other precarious and penurious industries, like logistics, fast food and domestic work. With enough density of membership, service-sector unions can raise standards in local, and ultimately national, markets. For example, in San Francisco and New York, where 90 percent of hotel housekeepers are unionized, average hotel housekeeper wages are $19 to $26 an hour, compared to a national average of $10.10. And, in other actions targeted at Walmart, this fall low-wage workers at Illinois and California Walmart warehouses conducted successful strikes for safer working conditions and against reprisals.

OUR Walmart recognizes that workers cannot change Walmart or the industry alone. After the holiday season, Schlademan says, Making Change at Walmart will be “moving into systematic and focused anti-retaliation campaigns to protect leaders and to educate in a much deeper way elected officials and communities.” The goal: “A community that will stand with workers at their stores against retaliation by man- agers while expanding membership.”

Yet some organizers question whether worker associations and minority unions can be effective, whether reliance on the Internet might induce neglect of face-to-face organizing and whether the campaign will remain funded over the long term. (Currently OUR Walmart is financed partly by member dues but primarily by a subsidy from UFCW, which is committed for the long haul, Schlademan says.) Nevertheless, labor needs more organizing drives that experiment with broad coalitions, industry-wide organizing targets, disruptive tactics and democratic self-organization.

For a beleaguered labor movement, the stakes are high. If labor cannot raise standards in the expanding universe of low-wage jobs, it could cease to exist, Woodruff warns. “The drive to self-organization of [Walmart and other low-wage] workers will determine the future of work and the future of the economy.”