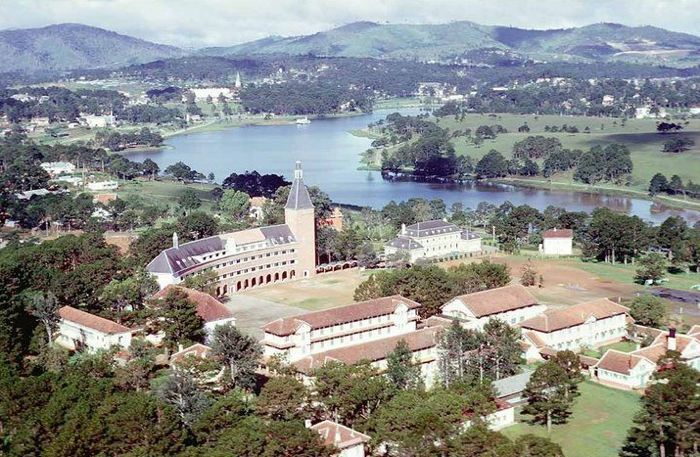 An aerial view of the author's school in Dalat, Vietnam.

A Child’s Christmas in Dalat

The author remembers his first Christmas, in 1969 Vietnam.

Then my father would open the champagne and pour each of us a glass. We didn't receive any gifts as children did in America, but we didn't need any and never felt the loss.

Wild orchids and colored, painted pine cones—these things I remember of Christmas in Vietnam. It was in Dalat, the hill station city with its persistent fog and whispering pine forests and littered with French-built villas, that I first celebrated Christmas. My father had been transferred there after the 1968 Tet offensive, and he brought the entire family with him.

The distant bombing and the tropical heat of Sadec in the Mekong Delta were replaced by Dalat's cool fresh breezes and romantic lakes. I was 5 years old, a child running free on fallen pine needles and tall green grass in the forest as I searched for wild mushrooms, pine cones and orchids for Christmas decorations. My older brother, sister and I would each carry a wicker basket and eventually fill them with all that nature had to offer. Those days we never bought any Christmas decorations.

We used to sing. And by singing, I mean spontaneously. As children we were not at all self-conscious and sang with gusto and often off key, but always with gusto. In the woods, early in the morning, we sang Christmas carols and chased each other, and sometimes the neighborhood kids would join in. Afterwards, our sweaters and hair would be embedded with pollen and pine needles. Dalat was a sparsely populated town then, and our laughter and singing echoed and resonated in the dew-covered forest.

At home we helped our mother decorate the Christmas tree. Its fresh pine fragrance brought the whole forest inside with us. My mother would roll cotton into shapes of little chicks and angels with wings and place them on the tree. The cones and mushrooms she painted green and red and blue and hung them everywhere in the living room. These ornaments were all the decorations we needed.

When my paternal grandmother came downstairs all dressed up in her ao dai dress, she would take us to mass. She held my hand and led me and my siblings on the dirt road to a local church whose bells rang out in the air. Though I wasn't a Catholic, I remember feeling a spiritual devotion in that church. Everyone was smartly dressed and smiling. People sang and read their psalms. Afterwards the priest distributed candy for the children. I remember it was early evening, the sun had sunk behind a bank of fog as we walked home, the world was glowing in a lavender hue.

But before going home we would stop by the Hoa Binh market to buy some fruit and baguettes. Children with pink round cheeks held their mothers' hands, and young adults in their best clothes walked around to show off their attire. The strawberries and plums we would eat on the way home.

At home, the best part of the Christmas dinner was dessert. My mother, a consummate baker, would make the traditional buche de Noel, a chocolate covered cake in the shape of a log with a tiny Santa Claus sitting on top. Then my father would open the champagne and pour each of us a glass. We didn't receive any gifts as children did in America, but we didn't need any and never felt the loss.

That was my favorite memory of Christmas in Vietnam. If you think that such a memory is out of place for a country whose image is full of conical-hatted figures working in the rice fields, then you haven't been to Dalat. Dalat, built by the French as a hill station resort, was for the most part a peaceful town, until near the end of the war. For those of us who had the fortune to live there, the war was often at a distance. Unlike the popular American belief shaped by Hollywood films, Vietnamese did not always live under constant terror and in half-burned villages. Instead, what we had in Dalat was a gentle, small town life that I haven't found again living here in America.

These days our Christmas is a big celebration in the San Francisco Bay Area. My paternal grandmother is long gone, but the Christmas trees are heavy with trinkets and baubles at my siblings' households. We vie to show off to one another how well we decorate our homes. Santa on the roof; reindeer on the lawn. Our Christmas dinner is often replete with seafood and my father's favorite dish, bouillabaisse, and, of course, roasted turkey and wines and champagnes. It is a testiment, I suppose, to how well we have fared in the land of plenty.

So many years have passed since the war ended, yet it is not the horrors of war that dwell now in my mind during Christmas time. It's the transcending peace in a tranquil world that is now lost.

Dalat, too, like the rest of Vietnam, is crowded with people and the trees are fewer and the forests thinned. Even the weather had changed, growing warmer with fewer trees.

Still, I bet there are children running and laughing, as before, among the pine needles and singing brooks on that high plateau I once called home.

What Howard Zinn Got Wrong