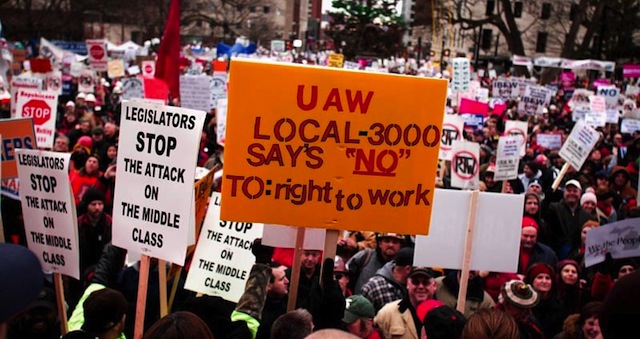 Union members from around the country rally to the Michigan State Capitol to protest "right-to-work" legislation on Dec. 11, 2012. (Bull Pugliano/Getty Images)

Time for Democrats to Pay Their Dues

For too long organized labor has failed to ask the Dems, ‘Which side are you on?’

Democratic leaders who think their party can survive without labor are grossly mistaken. Who will turn out the base—MoveOn.org?

The swift passage of Michigan’s so-called right-to-work legislation in December cemented a stark reality for labor: U.S. workers have been left without a national political party to champion their interests. Many local Democratic leaders—and a few members of Congress—still join the struggle for union rights, but aside from union-friendly rhetoric deployed around election time, the national party is disengaged.

The fact is, the success of the American labor movement has always depended upon a welcoming policy environment facilitated by an allied political party. While many forces are contributing to labor’s decline, we can no longer ignore a central one: The once-reliable Democratic Party has abandoned the cause. However, the party remains heavily dependent on labor for financial and organizational infrastructure. The Center for Responsive Politics reports that unions spent $1.1 billion between 2005 and 2011 supporting federal candidates for office. In 2008 alone, according to the New York Times, labor laid out $450 million to elect Barack Obama. If the state-by-state GOP war against unions is aimed at a primary source of electoral support for its opponent, why hasn’t that galvanized Democrats?

Indeed, Democrats have had ample opportunities to uphold workers’ rights. Unprecedented income inequality; attacks on labor in Wisconsin, Ohio and Michigan; and a low-wage business model that saps the wealth of workers and communities provide a natural pivot for Democrats to push a pro-labor agenda. But there have been no takers, in Congress or the White House.

Congressional Democrats have failed to revive the Employee Free Choice Act (EFCA) to liberate the 60 million workers who want to join unions. And not one Democrat in Congress sponsored a resolution repudiating the GOP’s attack on unions in Wisconsin and Michigan.

As the Democratic Party distances itself from labor, it increasingly has embraced a corporate agenda. Witness the bipartisan attack on teacher unions, labor–crippling privatization schemes, opposition to living-wage laws, and the cycle of impunity for those who commit financial crimes. It is no wonder that corporate power is ascendant, while the labor movement continues its unmitigated downward spiral.

It’s time for organized labor to get tough with the Democratic Party and seriously threaten to withdraw its support if Democrats fail to take decisive action to strengthen workers’ rights, such as reintroducing the EFCA and calling for a national living wage.

Democratic leaders who believe the party can survive without labor’s support are grossly mistaken. Without labor, who will turn out the base—MoveOn.org? Electronic voter engagement has its place, but it is well known that door-to-door canvassing and phone banking—what unions do best—are the most reliable ways to get out the vote. Not just that, unions educate and mobilize their own members to vote.

There are intermediate steps labor can take before parting ways with—and pulling the rug out from under—the Democrats. To counterbalance a political and media environment dominated by corporations, unions should require all candidates taking their campaign donations to enroll in seminars to learn how to talk about labor unions and workers’ rights. The candidates should then demonstrate good faith by promoting unions and workers’ rights at every opportunity—on C-Span, in constituent newsletters, press events, etc.—and by sponsoring needed legislation.

Labor unions can also reconsider electoral strategies so heavily weighted toward national races. Given the GOP’s state-level anti-union enterprise, more resources should be redirected from national elections towards identifying and recruiting community activists to run for municipal and state legislative office.

Strategic electoral spending can yield immediate results. In 2007, Chicago unions put up $3 million and successfully defeated six aldermen who voted against a proposed city ordinance requiring living wages at “Big Box” stores such as Wal-Mart. One of the six winning candidates was Toni Foulkes, a community activist and worker for the United Food and Commercial Workers union. Such local action can be the template for slowly transforming the Democratic Party.

The most effective way to get Democratic politicians talking about labor, however, is to get Democratic voters talking about labor. Labor should also undertake to improve public literacy about unions. Sixty years ago, when 33 percent of workers were union members, families talked about unions at dinner tables, holiday gatherings and at school. Then, public support for unions was correspondingly high. Now only 11.8 percent of workers belong to a union, and most Americans know little about them.

Many of the nation’s 15 million union members belong to religious and civic organizations. Through these ties, unions can develop relationships with those institutions. Social scientists Dorian Warren and Virginia Parks have noted that UNITE HERE Local 1 has formed relationships with 250 churches in Chicago, and those churches have become a key basis for the union’s efforts to mobilize community support for contract campaigns. Furthermore, the union can, through those ties, recruit community members to articulate the labor story, relay personal experience, and testify to the contribution that unions make to their community and family lives. The millions of people whose parents and grandparents were able to send them to college because of a good-paying union job must come forward and tell their stories—in the media, local forums, legislative and other public hearings, on blogs, and in places of worship and schools. Their voices should be infused into state debates about “right-to-work” laws and other anti-union initiatives.

The recent strike led by the Chicago Teachers Union (CTU) demonstrated that if unions stand up to billionaires, mobilize members, and rally the community, they can win the public debate. CTU used community engagement to expose the privatization agenda behind corporate-led teacher and union bashing. Now there is growing public appreciation of the complex set of factors—chief among them poverty—that underlie school failure. Even the Chicago Sun-Times, a champion of corporate education reforms, conceded in a Dec. 31, 2012 editorial that parental income and educational levels are “the biggest predictor of school success.”

Unions can also use the bargaining process, as CTU has, to demand inclusion of labor studies in the public school curriculum. State law can mandate labor education in public schools, as Illinois does currently. (CTU has vowed to get the law enforced.)

The labor struggle is about challenging the notion that a corporate elite possesses all the wisdom and should wield all the power. Americans are ready to repudiate those who brought us the greatest financial crisis since the Depression, environmental catastrophes like the Deepwater  Horizon spill, deadly mine disasters, the sub-prime lending crisis and outsourcing of good-paying jobs to low wage, anti-union countries. Labor must loudly challenge their claim to good judgment.

Across the country, labor-community alliances such as the Workers Organizing Committee of Chicago and OUR Walmart are growing around the demand for a living wage and better working conditions for service-sector workers. This new movement is worker-led, with credibility and support provided by powerful faith and community voices such as Arise Chicago and Los Angeles Alliance for a New Economy. They help to articulate the link between declining wages and the destruction of their communities. Importantly, all this grassroots agitation is producing a generation of new leaders who see the necessity of community-labor alliances.

The attack on workers’ rights in the United States constitutes a crisis not just for workers and communities, but for our democracy. As New York Times columnist Eduardo Porter puts it, inequality “breeds resentment and political instability, eroding the legitimacy of democratic institutions.”

There is still time for the Democratic Party to return to its noble mission of promoting labor rights. If Democrats, however, want to continue ignoring the growing social crisis, and if the current party system cannot meet human needs, perhaps a party realignment is on the horizon.