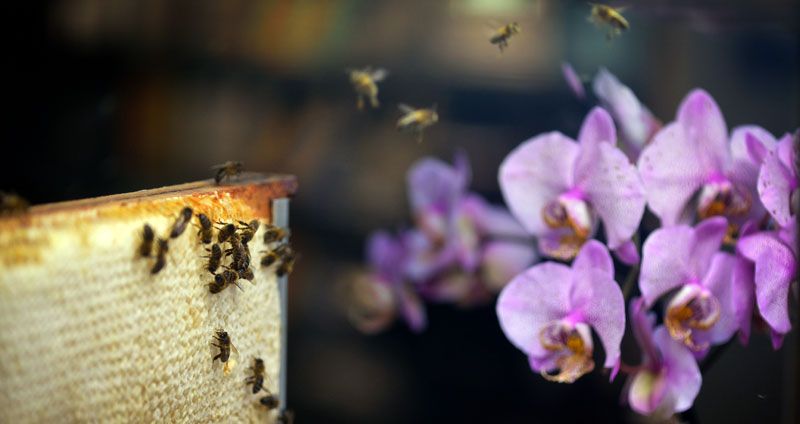 Bees on a hive during the International Food Fair in Villepinte, north of Paris. France strictly regulates the neonicotinoid pesticides that kill bees. (Eric Feferberg/AFP/Getty Images)

A Deadly Disorder at the EPA

Before we can save the honeybees, we need to resuscitate the EPA.

Bayer asked EPA officials to allow clothianidin on the market—before tests on the pesticide’s environmental impact had been completed. The EPA agreed. And thus began another chapter in the EPA’s sad history of protecting not the environment, but corporate interests.

Across America, honeybees and other pollinators are dying. And their demise threatens human life: Bees are the primary pollinators of the plants that provide one-third of the food people eat.

For a number of years, what exactly was causing the bees to disappear remained a mystery. Viruses, fungal infections, signals from cell phone towers and pesticides were all considered possibilities.

Now scientists have zeroed in on one culprit. On January 16, European Food Safety Authority researchers reported that neonicotinoid pesticides—or “neonics”—are poisoning bees. This E.U. study bolsters similar research published in the June 2012 Bulletin of Insectology by scientists at the Harvard School of Public Health.

Neonics, which are chemically related to nicotine, are fast becoming the most widely used insecticides in the world. They are what is known as “systemic” pesticides. That is, the neonics are applied directly to seeds, and those treated seeds then grow into crops that contain neonicotinoids in their pollen, their nectar and, indeed, their every fiber.

Clothianidin and imidacloprid are the two most commonly used neonicotinoids in the United States. Both are manufactured by Bayer, the multinational German biotech firm famous for its aspirin. Imidacloprid, which is now off patent, is also distributed by other companies.

Imidacloprid was first introduced in 1994, as an alternative to organophosphate pesticides, such as diazinon and malathion. Organophosphates, originally developed by the Nazis during WWII as nerve gas agents, are acutely toxic and have been banned for residential use because they can damage human fetuses.

Each year in the United States about 143 million acres of farmland are planted with seeds treated with clothianidin and imidacloprid—rendering the pollen of the mature plants poisonous to bees. In 2003, France, following the death of about one-third its honeybees, suspected imidacloprid as the culprit and banned its use on corn and sunflowers. Clothianidin is most commonly used to treat corn, a crop that produces abundant pollen that bees love. It is also used on the seeds that grow canola, sugar beets, soybeans, sunflowers, wheat and cotton.

In 2003, Bayer asked EPA officials to allow clothianidin on the market—before tests on the pesticide’s environmental impact had been completed. The EPA agreed. And thus began another chapter in the EPA’s sad history of protecting not the environment, but corporate interests.

In 2007, Tom Theobald, who for 38 years has been a beekeeper in Boulder County, Colo., noticed that his bees were not thriving. So the one-time IBM employee set out to discover why. His research led him to neonics and the EPA.

On Nov. 29, 2010, Meredith Laws, an EPA official, sent Theobald an e-mail in which she explained that on April 22 of that year, the EPA had granted Bayer the “unconditional” right to market clothianidin “as a seed treatment for corn and canola.” Laws, who is now in charge of the EPA office that oversees the approval of organophosphate and neonic pesticides, went on to explain: “This was a risk management decision based on … [EPA] reviews accepting or acknowledging the submittal of the data [from Bayer’s field tests].”

But the testing Bayer did to demonstrate the environmental safety of its pesticide was spectacularly shoddy. Soon after Theobald received Law’s explication, a whistleblower in the EPA sent him an internal memo that had been written weeks before. In that Nov. 2, 2010 memo, scientists at the EPA’s Environmental Fate and Effects Division wrote:

Clothianidin’s major risk concern is to nontarget insects (that is, honey bees). … Acute toxicity studies to honeybees show that clothianidin is highly toxic on both a contact and an oral basis. … Information from standard tests and field studies …suggest the potential for long term toxic risk to honey bees and other beneficial insects. … [A]fter another review of [the Bayer field] study in light of additional information, deficiencies were identified that render the study supplemental.

Since then, independent studies implicating clothianidin in the death of bees have piled up.

And as the EPA fiddles, bees die. “My honey production is less than 10 percent of what it was in 2007,” says Theobald. “I am just about out of business. The chemical companies claim this is the only way that we can feed the world, but what it really feeds is their cash flow.” (The EPA did not respond to requests for comment.)

In 2010, Bayer sold an estimated $1.08 billion worth of Poncho and Gaucho worldwide. As Bayer bragged in its 2011 annual corporate report:

Throughout the Europe region, we registered strong growth in sales of our seed treatment products, especially the Poncho product family.… Sales of seed treatment products benefited particularly from the expansion of business with Poncho in the United States, where it recently became available for use in soybeans and cotton.

However, almost none of that strong sales growth comes from Bayer’s home country, Germany, where Poncho and Gaucho are strictly regulated because of the danger they pose to honeybees and other pollinators upon which a healthy ecosystem depends.

CropLife America (formerly known as the American Crop Protection Association) is the industry lobbying group financed by what are known as the “Big 6”: Monsanto, DuPont, Bayer, Dow, BASF and Syngenta. These six global corporations have acquired 74 percent of the global pesticide market and 49 percent of the proprietary global seed market—not to mention apparent controlling interest in the EPA.

The Big 6 business model is deviously simple. They sell seeds and pesticides—seeds coated with their insecticides (such as Bayer’s Ponchotreated corn) and seeds biologically engineered to grow crops impervious to their herbicides (such as Monsanto’s Roundup Ready soybeans).

To no one’s surprise, last year the Big 6 contributed $21.5 million of the $45 million spent on the “No on 37” disinformation campaign that successfully defeated California’s Proposition 37, which would have required that genetically engineered food be labeled.

These days, CropLife America and its Big 6 backers are busy presenting themselves as the true friend of honeybees. On CropLife’s “Protecting Our Pollinators” webpage, the reader learns that “bees are responsible for more than just honey; the list of crops that bees help grow is extensive, and includes grapes, strawberries, avocadoes, and cucumbers.”

As for the disappearing honeybee? CropLife explains:

Many of the recent studies which attempt to link neonicotinoid pesticides to [honeybee colony collapse disorder] CCD fail to recreate practical in-field solutions of pollinator exposure to pesticides or pollinator behavior, and ignore the many possible threats that bees face. Scientific literature examining the potential causes of CCD is incredibly varied and will need additional research.

So what can you do to save honey bees and other pollinators? CropLife encourages people to go out and plant flowers.

“I compare that to planting buffalo grass to bring back the buffalo,” says beekeeper Theobald. “If we don’t have the bees, it doesn’t matter how many flowers we plant.” He goes on to say, “Habitat is only a part of the issue. Widely used, systemic pesticides like neonicotinoids have, quite literally, poisoned the earth. The bees are an indicator species of much larger problems.”

To save the honeybees, concerned citizens might want to organize at the grassroots to prohibit neonics from being applied in their city or county.

CropLife, however, is working to prevent that through its membership on the Agriculture Subcommittee of the American Legislative Exchange Council (ALEC). ALEC, known for creating volumes of cookie-cutter, right-wing legislation, has prepared “The State Pesticide Preemption Act,” which would prohibit local governments from regulating pesticides.

It appears the only way things will begin to change is if people begin to ask: “Why are the honeybees dying?” And then go on to question the sustainability of the industrial agriculture model on which the profits of the Big 6 depend.