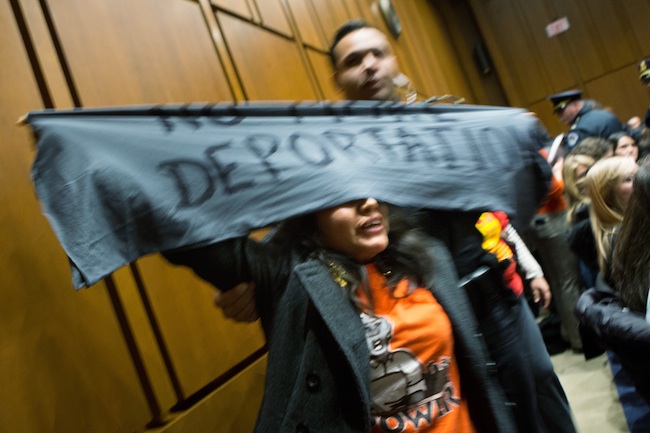 A protestor is taken away by Capitol police during a Senate Judiciary Committee hearing on 'Comprehensive Immigration Reform' on February 13, 2013 in Washington D.C. (Photo by Allison Shelley/Getty Images).

As D.C. politicians quibble over immigration reform, their plans all make the same big mistakes.

The Senate “Gang of Eight” tout their blueprint as a "tough but fair" plan that tempers "earned" legalization with harsh border enforcement, bureaucratic hurdles and financial penalties for immigration violations. ... The idea is to avoid passing any legislation that resembles “amnesty” or going too soft on unauthorized immigrants.

After years of Congressional silence on immigration, Washington is finally stirring toward legislative reform, driven by Democrats and Republicans angling for Latino and Asian votes. But the plans being concocted have already sharply diverged from the demands of the grassroots immigrant-rights movement.

So far, the White House and a bipartisan group of Senators have each floated similar outlines for reform that include a process for legalization or citizenship, recruitment of foreign-born workers into select industries, and strict “border security” measures. In addition, the details of leaked White House draft plan were reported by USA Today this weekend. Despite criticism from conservatives, the draft also emphasizes stronger enforcement of immigration laws.

Though the various efforts all aim to fashion a “comprehensive” reform package, any resulting legislation will likely be anything but: While lawmakers squabble over how broad or narrow to make the legalization process, activists fear Congress may simply erect a bureaucratic dam in place of a broken border wall, let corporations control the floodgates, and still exclude millions of immigrants.

The best and brightest?

Both President Obama and the Senate group endorse special visa programs for jobs in specific sectors that, not coincidentally, wield lobbying influence. The agricultural industry pushed for, and got, promises of visas for migrant farmworkers. At the other end of the economic spectrum, Silicon Valley moguls successfully advocated visas for science and technology professionals. Such limited visas are usually called “guestworker” programs, although the Washington proposals shy away from the controversial term.

According to talking points emerging from the White House and the Senate group, another special channel of relief may be opened for undocumented youth, following high-profile, media-savvy mobilizations to support the DREAM Act, which would legalize undocumented students. (In response to continued stagnation on the legislation in Congress, Obama issued a scaled-down administrative directive in August to defer deportations for DREAM-eligible youth).

But many lower-profile migrants have virtually no voice on the Hill. Undocumented women laboring as domestic workers in private homes, or day laborers and dishwashers paid under the table, are no less in need of relief. But under the proposals in play, they can only hope for a more limited legalization process, which might impose deep financial penalties and drag on for years (some estimates suggest up to several million could be disqualified by barriers such as minor past convictions or English-language requirements). Moreover, it's unclear how far “comprehensive” reforms would go toward ensuring enforcement of labor protections for all—citizen and non, with or without papers—which labor activists see as a crucial step toward building a truly fair, inclusive workforce.

The Senate reform outline, issued by a coalition that includes Republicans Marco Rubio of Florida and John McCain of Arizona, links legalization to a vague standard of “securing our borders.” The language suggests that legal fate of millions might be tied to a yet-to-be-defined benchmark of successful “security” achieved by ramping up  that have already terrorized countless families through surveillance, incarceration and deportation. Though actual net migration from Mexico currently hovers around zero, and it's unclear whether border policing even deters migration, the Senate plan vows to provide the Border Patrol with resources such as drones “to prevent, detect, and apprehend every unauthorized entrant.” The White House draft plan details similar heavy enforcement measures.

Many immigrant-rights activists have demanded a halt to the monstrous federal crackdowns. Sadly, the most attention this idea received at the recent Senate immigration hearing was when a cluster of protesters interrupted with calls to “Stop the Deportations!”, only to be removed by Capitol police. Yet their action reflects an escalating wave of protests that have amplified immigration struggles in the media and intensified pressure on lawmakers nationwide.

In response to centrist, enforcement-heavy reform proposals, some grassroots immigration groups seek a more principled dialogue. Their street-level resistance to mass deportation and state anti-immigrant policies, such as Arizona's notorious racial profiling legislation, SB1070, has inspired a radical reform vision rooted in human rights. In a recent declaration of “alternative” reform principles issued by the labor coalition United Workers Congress, Saket Soni of the National Guestworker Alliance stated that while Washington inches toward reform, “workers across the country are setting out to win full and first-class citizenship.”

The central point of tension in the reform debate, the “path to citizenship,” reveals how removed the legislative discussion is from the day-to-day needs and realities of immigrant communities. The Senate “Gang of Eight” tout their blueprint as a “tough but fair” plan that tempers “earned” legalization with harsh border enforcement, bureaucratic hurdles and financial penalties for immigration violations. Such punitive provisions have also been pushed by the White House. The idea is to avoid passing any legislation that resembles “amnesty” or going too soft on unauthorized immigrants—the same tension that derailed the last big push for reform in 2006.

Faced with a rare opening for action in Washington, many advocates may prefer settling for a compromise reform bill, rather than continue with indefinite legal and social instability. But Catherine Tactaquin, head of the National Network for Immigrant and Refugee Rights, isn't pinning her hopes on Beltway dealmakers. She tells In These Times that although there is “a lot of pressure to support this bill in whatever form,” for organizers, “if it's a victory it will be an incomplete one, and the fight will have to continue.”

The battle outside of Washington policy circles revolves around basic social rights. Undocumented immigrants and their families face the constant threat of deportation as well as employment discrimination and other social and economic hardships. Their marginality in turn leaves them exposed to coercion and abuse, including the epidemic of wage theft in rough job sectors like construction.

More radical immigration advocates want reform to prioritize the rights of workers and communities over business interests. Tactaquin worries that both parties are too focused on a “'best and the brightest,' … brain-drain approach to immigration, of giving people visas from the high skilled industries.”

She continues, “We think the best and the brightest are already here, and they're both immigrant and non-immigrant, and we should be investing in educational support and other forms of social policy that are going to enable our populations to also reach their potentials … in high-skill or low-skill areas.”

Philosophically, many progressive immigrant advocates reject the guestworker expansions lawmakers have proposed, on the grounds that such policies will create a non-citizen underclass that is disenfranchised both in the workplace and the political system. They see current guestworker programs in farmwork and other sectors, which typically condition legal status on being tied to a specific employer or job, as intrinsically prone to exploitation. Guestworkers are more vulnerable to abuse as long as their immigration status depends on keeping the boss satisfied. It's not clear whether the “special visas” proposed by the White House and the Senate would come with similiar conditions.

But given the reality that guestworkers are already a major component of sectors ranging from hotels to seafood factories–and that the U.S. is responsible for protecting their rights while they’re here–the United Workers Congress calls for reformed guestworker systems, managed by an independent body that would guarantee labor-rights safeguards. Advocates also want “job portability” to enable workers to change jobs without jeopardizing their status. A related initiative, the campaign for legislation known as the POWER Act, would beef up legal protections for workers who file complaints against crooked employers, which could encourage more migrants to challenge abusive employers without fear of legal retaliation.

Such protections might incrementally help equalize rights for guestworkers, Tactaquin said, but NNIRR and other groups want to move away from or abolish the guestworker system altogether. A more sweeping alternative reform plan, the Dignity Campaign, would gradually phase out guestworker programs while implementing fast legalization and repealing harsh enforcement measures, to ensure “human, labor and civil rights for all.”

Radical immigration activists envision policies that look beyond mere “legalization” to confront the global social disparities that form the root causes of migration. NNIRR, for instance, has worked with overseas groups on UN initiatives to strengthen migrant rights across nations. This perspective takes into account how U.S. foreign policy has helped create the conditions driving immigration, such as the neoliberal trade policies that have displaced workers and entrenched poverty across many “migrant exporting” countries.

Tactaquin sees long-term solutions emerging at a global level, through a just foreign policy that recognizes systemic economic injustices in migrant “exporting” countries. This multilateral approach would “support sustainable development policies in other countries, job creation, sound environmental practices,” she said. “These are things we should be investing in long-term.”

Such social investments blur conventional divisions between domestic and foreign policy. And with Congress mired in vote-counting and filling job slots, progressive pro-migrant groups must continue broaching those global struggles through grassroots community mobilization–often just one petition, sit-in or march at a time. Though excluded from the political arena, when they take to the streets and declare their existence as border crossers, migrants embody the connection between human movement and social movement.