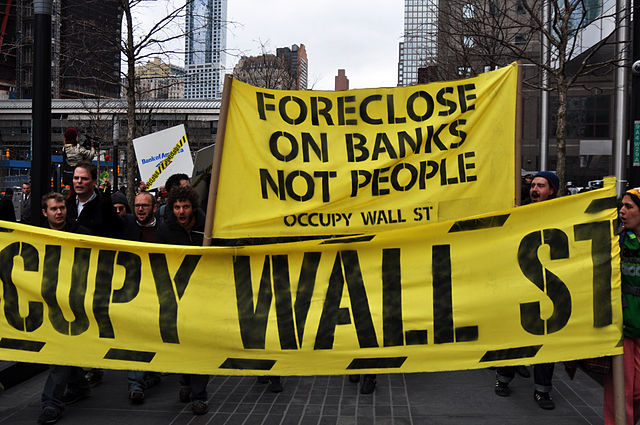 March 15, 2012: On the theory that 'the bank took our homes so we're moving in with them,' Occupy Wall Street activists 'moved in' to an NYC Bank of America branch by setting up a sidewalk living room. (MikeFleshman/WikimediaCommons/CreativeCommons)

Too Big to Jail

Switzerland and the European Union have reined in bankers. So why can’t the U.S.?

If these banks are so big that prosecuting outlaw executives in one will take down the economy, then it’s impossible to believe that taxpayers won’t be forced to bail them out again when Wall Street loses its next big gamble.

The U.S. Attorney last week confirmed Americans’ fears about Wall Street. The banks, Eric Holder said, were not just too big to fail; they were also too big to jail.

Unlike vulnerable ancient villages, however, the United States has considerable power over these banker barbarians. Banks, after all, are nothing but corporations. Corporations are legal constructs that citizens have the right to rebuild to properly serve society. European countries began doing that last week. Their first steps included limiting banker bonuses and giving shareholders binding say on CEO pay.

It started on Sunday, March 3, when the Swiss voted to grant to those who own corporations—the shareholders— the right to determine executives’ and directors’ pay. In addition, the referendum outlawed golden handshakes and golden parachutes. These are massive handouts to corporate executives—like the $78 million that Swiss-based healthcare products corporation Novartis proposed as a goodbye gift for CEO Daniel Vasella.

Nationwide outrage scuttled Vasella’s windfall and withered referendum opponents. The measure, called the Minder Initiative after its author Thomas Minder, passed with 68 percent of the vote. Even before Vasella, the Swiss were annoyed that the country’s biggest bank, UBS, had to be bailed out and that another huge bank, Credit Suisse, gave its CEO $76 million in shares in 2010.

So they did something. They changed the rules to tame banker barbarians and rogue corporations.

Two days after the Swiss referendum, the European Union’s finance ministers voted 26-to-1 to limit banker bonuses. Beginning next year, a bonus may not exceed the amount of a banker’s annual salary. Or, if the bank’s owners—the shareholders—approve, a bonus may be as high as twice the salary.

The intent is to reduce risk taking. When bankers win big gambles, they’re rewarded with big bonuses. When they lose, taxpayers bail them out. The E.U. lowered the bonus payments, lowered the wagering incentive, and lowered the chances of another bailout.

Only Britain, a major banking center, voted to continue the current regime of taxpayer-financed bank gambling. Prime Minister David Cameron took a considerable risk himself to side with banks since the vast majority of the British electorate, suffering under austerity, resents the banking industry for crashing the economy, extracting bailouts and pocketing regal pay.

In addition to capping banker bonuses, the measure stiffens capital requirements for some 8,300 European banks in the 27 European Union countries to prevent another financial crisis as well as mandating that the banks publish detailed information on profits, taxes and subsidies.

Although, obviously, the United States isn’t an E.U. member, the measure appears to affect some American banks and bankers. For example, it likely would cap the bonuses of executives working in New York for London’s Barclays and those working in London for Wall Street bank Citigroup.

That’s good for the United States, which looks like a legislative sissy compared to Switzerland. Congress gave American shareholders a faint say on pay— they may vote, but only every third year and only as a non-binding advisory. Congress said corporate executives and directors are free to ignore the people who own the company and pay themselves whatever they want.

In addition, Congress required corporations to report the ratio of a CEO’s compensation to that received by the company’s median worker.  But corporations aren’t doing it—because no one’s enforcing it.

These measures were included in the 2011 Dodd-Frank law, which was hyped as legislation to prevent another Wall Street bailout.

Attorney General Eric Holder eroded confidence in that on Wednesday when he testified that criminal Wall Street bankers are too big to jail. Here’s what he said:

“I am concerned that the size of some of these institutions becomes so large that it does become difficult for us to prosecute them when we are hit with indications that if you do prosecute, if you do bring a criminal charge, it will have a negative impact on the national economy, perhaps even the world economy.”

If these banks are so big that prosecuting outlaw executives in one will take down the economy, then it’s impossible to believe that taxpayers won’t be forced to bail them out again when Wall Street loses its next big gamble.

What Eric Holder said is that these banks operate beyond the pale, outside the rules of society because they’re too gargantuan for society to hold accountable. They can do anything they want. They can gamble like crazy, and when it fails, suffer no consequences. Taxpayers will backstop their losses. And prosecutors will decline to prosecute. That is exactly what happened in 2008.

The E.U. has refused to stand by helplessly again, like The Three Bears, while some European version of Goldman Sachs ransacks their financial house. The Swiss and the 27 European Union countries voted to change the rules in order to restrain corporate renegades and ensure banks operate in ways that benefit society.

What they did is not enough. But it’s a good start. The vast majority of Americans abide by society’s rules and live inside the pale. They need legislation to yank bankers back within that fence.