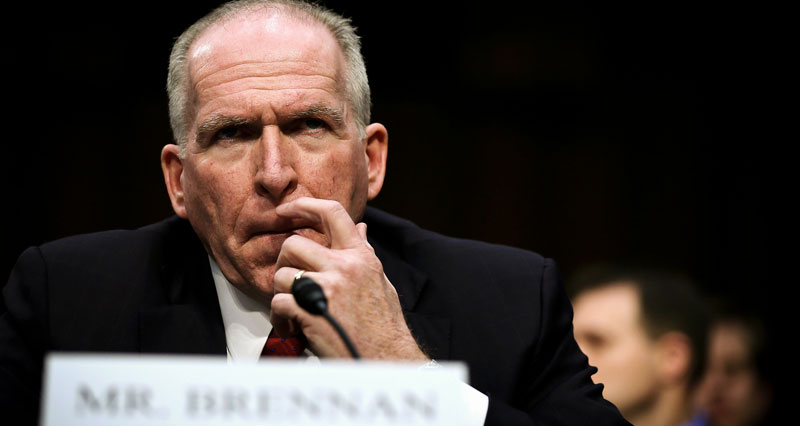 The Senate watchdogs of the CIA played dumb on drones–again.

It should be noted that half of the committee, including its chair, Feinstein, take campaign contributions from CIA contractors such as Northrup Grumman, Lockheed Martin and Raytheon, all three of which manufacture drones.

In 1976, followIng revelations of CIA abuses during the Nixon Administration (including spying on domestic dissidents), Congress created the Senate Select Committee on Intelligence (SSCI) to oversee the CIA’s covert operations and protect the American people from its excesses.

During the past 15 years under SSCI’s watch, the budget of the National Intelligence Program (which includes the CIA) has tripled and the CIA has morphed from an intelligence gathering operation into a paramilitary force that has assassinated thousands of alleged terrorists, including American citizens, in countries far from any U.S.-declared war zone, such as Yemen and Somalia.

On February 7, Americans got a picture of SSCI oversight in action during the confirmation hearings of John Brennan for CIA director, televised on C-SPAN. A 25-year veteran of the agency, Brennan has overseen the massive escalation of the drone war under President Barack Obama. Before that, under President George W. Bush, Brennan oversaw extraordinary renditions—i.e., sending captives to “black sites” in foreign countries to be tortured.

At his confirmation hearing (described by the mainstream press as a grilling), Brennan assured the SSCI that the executive branch uses lethal drone strikes only as a “last resort to save lives when there’s no other alternative.” Brennan was not asked about a leaked government memo that invents new, watered-down definitions for phrases like “imminent threat” and “capture infeasible,” effectively giving the president legal cover to kill anyone. Nor was Brennan asked about “signature strikes” in which drone operators fire on people based only on visual evidence of suspicious behavior.

Although the CIA assassinated three American citizens in Yemen in the fall of 2011, including a 16-year-old boy named Abdulrahman, the committee only asked Brennan about the killing of the boy’s father, Anwar al-Awlaki, described by the U.S. as a senior al Qaeda leader—a claim vehemently contested by Yemen experts. At the hearing, Sen. Dianne Feinstein (D-Calif.) sought to put al-Awlaki on trial posthumously, apparently to assure the public that their government only kills American citizens who are bad people.

Did al-Awlaki have a connection to the attempted bombing of a commercial airliner over Detroit or to the Fort Hood shootings? Feinstein asked. Brennan was “not prepared” to say. But he did “believe” that another terrorist once told interrogators “that he was inspired by alAwlaki.” In the end, Brennan agreed with Feinstein that al-Awlaki is not “an American citizen of whom anyone in America would be proud.”

Sen. Dan Coats (R-Ind.) did raise the crucial question of whether the CIA’s drone warfare is creating more terrorists than it is killing. While in the past, Brennan has stuck to the line that al Qaeda is being “decimated” by drones, he conceded that al Qaeda is “metastasizing now across northern Africa and other parts.” Yet he saw no reason to change course.

Sen. Mark Udall (D-Colo.) expressed concern over the CIA’s practice of producing faulty intelligence and then classifying any reports that would expose the deception. A case in point: Brennan himself has said publicly that the Bush administration’s enhanced interrogation techniques (EITs) produced “valuable intelligence” that “saved lives.” But when the SSCI reviewed more than 6 million pages of intelligence documents and produced a report in December 2012, it concluded, according to Udall, that the EIT program was “brutal,” “severely flawed,” and “did not work.” Of course, we don’t know how the committee came to those conclusions because the report has yet to be declassified.

It should be noted that half of the committee, including its chair, Feinstein, take campaign contributions from CIA contractors such as Northrup Grumman, Lockheed Martin and Raytheon, all three of which manufacture drones.

At the conclusion of the hearing, Brennan asked each senator who sits on the committee to protect the American people from CIA abuses, to instead be “an ardent advocate, proponent and defender of the men and women of the Central Intelligence Agency.” It appears likely that Brennan will get his wish.