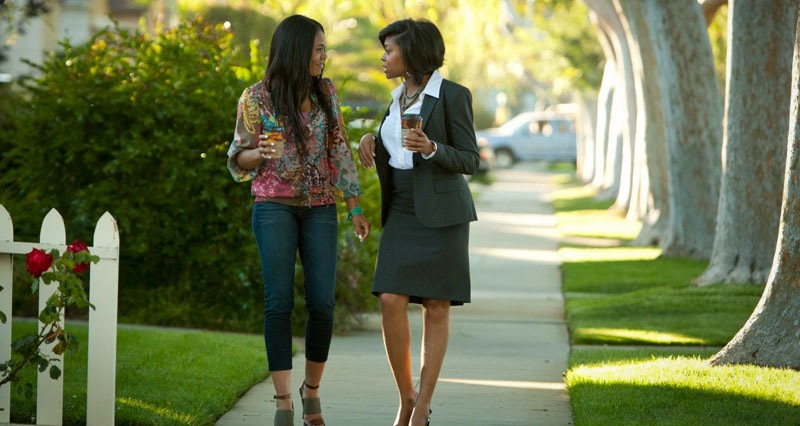 The film "Think Like A Man" instructs black women to curb their success to get a man. (Photo courtesy of Sony Pictures)

Leaning In While Black

Thanks to concerns about low marriage rates among African Americans, professional black women are bombarded with warnings about careerism and success.

James Brown may have left this mortal coil, but one of his most famous pronouncements is as true today as in 1966: “This is a man’s world.” Only 17 of the world’s 193 countries are led by women; in the United States, women hold just 14 percent of executive officer positions and 18 percent of congressional seats.

Numerous researchers have looked into why this glass ceiling persists. In a 2003 study on gender, success and likeability, professors from Columbia Business School and New York University found that a successful “Howard” is viewed as more appealing than a “Heidi” with identical accomplishments and personality traits. Women’s careers are also hampered by a culture that insists that men should be primary providers and women primary nurturers and housekeepers, forcing women to make hard decisions between work and family. And that is just a fraction of the story of inequity. It is no wonder many women back away from their ambition.

According to Sheryl Sandberg, Facebook COO and author of the self-described feminist manifesto Lean In: Women, Work, and the Will to Lead, this disparity in power and achievement can be attributed to systemic gender inequality and cultural biases, but also to something else: the way women are acculturated to respond, often subconsciously, to these factors. Sandberg calls on women to “lean in”: to act with boldness and confidence; to “sit at the table” where decisions are made; to choose life partners who support their careers; and to not put those careers on hold for marriage and babies before those things are a reality.

Whether Sandberg, from her perch at the pinnacle of a tech behemoth, is the right person to lead a revolution for less-privileged women has been the topic of much debate. But bits of the author’s wisdom may “click” for particular readers in unexpected ways. Sandberg’s message about choosing supportive partners made me blink, because it stands in stark contrast to advice directed toward a particular segment of professional women. Thanks to concerns about low marriage rates among African Americans, professional black women are bombarded with warnings about careerism and success. A burgeoning genre of advice books instructs straight black women to, in effect, “lean back” in order to attract men.

In Act Like a Lady, Think Like a Man, (the basis for the film Think Like a Man), author Steve Harvey admonishes: “If you’ve got your own money, your own car, your own house, a Brinks alarm system, a pistol and a guard dog, and you’re practically shouting from the rooftops that you don’t need a man to provide for you or protect you, then we will see no need to keep coming around.” Elsewhere, Harvey warns women that if they travel for business, their left-behind husbands might understandably stray.

Black women, especially highly successful ones, are expected to sacrifice achievement for the alleged greater good of traditional marriage. And they are encouraged to think more about being chosen than choosing—making themselves attractive to men by conforming to an outdated template of femininity rather than, as Sandberg suggests, selecting a supportive mate interested in a 50/50 partnership.

Sandberg counsels that choosing a mate is one of the most important decisions a working woman will make. If that is true, lack of support, in addition to systemic sexism and racism, may explain why black women fare worse than their white counterparts in the halls of power. All women of color make up just 4 percent of top corporate jobs, 3 percent of board seats and 5 percent of congressional seats. Snagging unsupportive life partners isn’t likely to improve these statistics (or the personal lives of women).

In Lean In, Sandberg admits the privilege her class, education and executive position afford her, but she does not articulate her racial privilege as clearly. It would have been helpful for Sandberg to acknowledge that a Latina or African- American woman in her position would be burdened by gender and race. If, as Sandberg notes, female executives are often deemed hyper-aggressive, what does that mean for women who, thanks to long-held stereotypes, are often viewed as aggressive simply by dint of their race? As Angelica Perez-Litwin notes in a Huffington Post review of Lean In, “An assertive Latina at work risks being seen as ‘difficult’ or ‘opinionated.’ A confident voice level makes her ‘confrontational’ or ‘loud.’”

By acknowledging race, as she did class and education, Sandberg could have made Lean In more accessible to a more diverse group of women. Yet what she has to say is not useful only to white, Ivy League-educated, millionaire executives at Fortune 500 companies.

A blend of memoir, research and advice, Lean In is thoughtful, engaging and inspiring. At a time when the belief in “post-feminism” is relentless—despite all evidence that we simply aren’t there yet—and many high-profile women shrink from the label “feminist,” Sandberg is taking the discussion about gender-biased expectations of women and men to the mainstream and publicly giving women support to buck the rules of gender essentialism. This would seem to benefit all women.

But not every critic agrees that Lean In has value. The uproar surrounding Lean In seems uncommonly hostile and personal. The New York Times’ Maureen Dowd accuses Sandberg of “a grandiose plan to become the Power-Point Pied Piper in Prada ankle boots.” Melissa Gira Grant in the Washington Post reckons Sandberg is too elite to have anything of value to say to regular women and accuses her of launching a campaign to bolster her “brand.” In Forbes, Deanna Zandt admits to not having read Lean In, but that doesn’t stop her from admonishing Sandberg for blaming the victim, trying to “fix women” and focusing too narrowly on child care.

Critics’ chief argument seems to be less about what Sandberg has written (several indictments were penned before Lean In was released), than about who she is—a wealthy, privileged woman. It’s an odd stance to take, though, that a woman’s success renders her advice on women’s success useless, or that the last people we want talking about feminism in public are powerful women with the ears of the media.

Sheryl Sandberg isn’t every woman, and Lean In may not be a manifesto for all women. But we should appreciate that Sandberg has started a mainstream dialogue. Lean In is a helpful blueprint for professional women hoping to advance in their careers. For professional black women, the advice about choosing partners may serve as a crucial, if accidental, intervention. And that shows how Lean In is a potential framework upon which intersected conversations—including a diversity of voices—about work, family, culture and, importantly, policy can be built.

Tamara Winfrey Harris explores race and gender, and their intersection with pop culture and politics. her work has appeared in Ms., Bitch and the Chicago Sun-Times, and online at The Guardian, Huffington Post, Change.org, Newsweek and Psychology Today. Tamara is a senior editor at Racialicious. And she is working on her first book--a feminist exploration of black women and marriage, and the sexist and racist underpinnings of the "black marriage crisis" narrative.