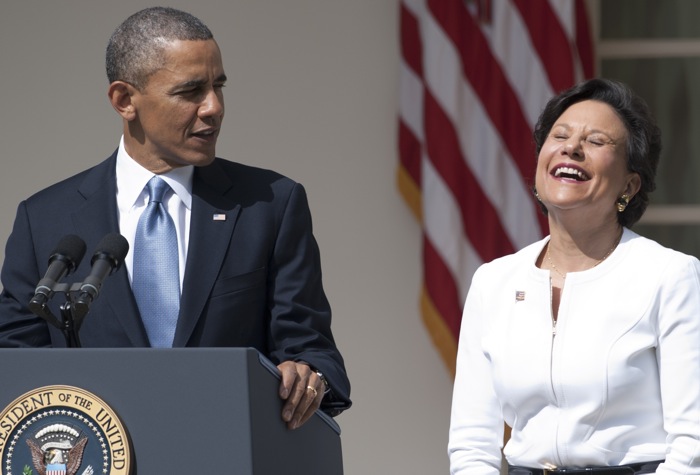 'Penny Pritzker has still not answered for her and her family’s role in the subprime mortgage meltdown of the world-wide economy,' says bank-advisor-turned-banking-watchdog Tim Anderson.

But progressive Democrats are the ones with real reasons to be upset with her record and that of her family, which is among the wealthiest in America. Here are just a few:

1) Union-busting. Pritzker’s family businesses have often engaged in anti-union practices. She is a director of the Hyatt Hotels, which fired and then replaced long-time room cleaners in its Boston hotels with non-union subcontracted workers. Hyatt has refused to settle several contract disputes with UNITE HERE, some lasting nearly four years, on terms similar to those accepted by other big hoteliers.

2) Conflicts of interest. The family’s $20 billion empire was built on a diverse base of businesses, including Hyatt, Marmon (an industrial conglomerate), the TransUnion credit rating agency, and many others in industries such as container leasing, insurance and travel.

The family has long had a reputation for not only accumulating its wealth through elaborate schemes of tax evasion, including offshore accounts, but also for using its political clout to win favored treatment.

For example, community and teacher union critics berated Pritzker, who recently resigned from the Chicago Board of Education, for supporting the closing of dozens of public schools because of financial pressures. At the same time, the highly profitable Hyatt was receiving financial assistance from a Tax Increment Finance fund (a pool of money intended to support blighted neighborhoods in the city) whose assets effectively had been diverted from support of the schools.  Pritzker also has drawn fire for her leading role in promoting privately operated charter schools, including networks of non-profits to which she has contributed.

While some Pritzkers support Republicans, others, like Penny, are active patrons of corporate-oriented Democrats. Penny Pritzker, who knew Obama before he ran for president, served as financial chair of his first campaign and is credited with bringing in millions of dollars in donations. Many observers see her appointment to the relatively weak—if symbolically still important—commerce post as typical campaign spoils for big contributors.

But if she is approved, it will burnish her reputation and increase her potential influence. The Pritzkers, who have contributed large sums to education, medicine, architecture and the arts in their hometown of Chicago and elsewhere, gain protection from the fallout of their questionable business practices through their public image as philanthropists.

3) Shady business dealings. The Pritzkers have a long history of business malfeasance at the expense of people of modest means. In one notable case, Congress passed legislation in 2003 to address issues raised by widespread charges that the Pritzker’s credit rating agency, TransUnion, had made serious flaws in its credit reports on individuals—and then failed to correct them upon discovery.

But perhaps the most infamous and pernicious Pritzker abuse of power was the Superior Bank scandal, a predatory subprime mortgage securitization racket that led to the failure of Superior Bank in 2001 and prefigured the 2008 crash.

Penny Pritzker played a leading, decision-making role in the lead-up to the failure, which ultimately lost 1,400 depositors an estimated $10 million and cost the Federal Deposit Insurance Corporation approximately half a billion dollars. After the Pritzkers and a family friend took over a failed suburban Chicago bank on very favorable terms in 1988, they began aggressively pursuing high-interest, high-risk subprime loans. They were able to repackage the loans in securities given an investment grade, Anderson says, because they promised to replace any failed mortgage with a good one. But as they pumped out profits for themselves, they eventually failed to live up to their promises, including a pledge to invest more capital.

Bert Ely, a prominent bank consultant, says that Superior Bank “was a really sleazy operation” and “pretty gross.” The bank essentially told others in the business to “bring us your crappiest loans you’ve got and we’ll securitize them.”

In 2001, the bank collapsed. But thanks to an unusual deal with the FDIC that allowed the Pritzkers to share in a lawsuit against the bank’s auditors, Penny and her family ultimately profited from the failure. They “didn’t own up to their responsibility,” says Ely. “My estimate is that the owners of Superior ended up making big money on the deal after taking into account tax laws, and it’s unconscionable that they made money while pensioners lost money.”

When FDIC took over, the Pritzkers continued the operation, giving it an air of legitimacy and setting up the global economy for disaster. Superior’s exploitation of securitization of sub-prime loans, coupled with federal regulators’ lax treatment of the Pritzkers, inspired other lenders, helping to spawn the huge subprime loan market in exotic derivatives that precipitated the 2008 Great Recession. “They plowed the ground,” says former Federal Reserve staffer Walker Todd. “They were the first to show how bankers could make money in the sub-prime business.”

“Penny Pritzker has still not answered for her and her family’s role in the subprime mortgage meltdown of the world-wide economy,” says bank-advisor-turned-banking-watchdog Tim Anderson.

The power of the Commerce Secretary is limited, with many doing little more than promoting American business. But when a Democratic president chooses a business ambassador who has played so loose with the rules, caused so much harm, and shown—despite the philanthropic overlay—so much selfishness and greed in her business practices, it sends the wrong message to an already out-of-control plutocracy.

Is this the model for American business that President Obama and the Democrats really want to promote?