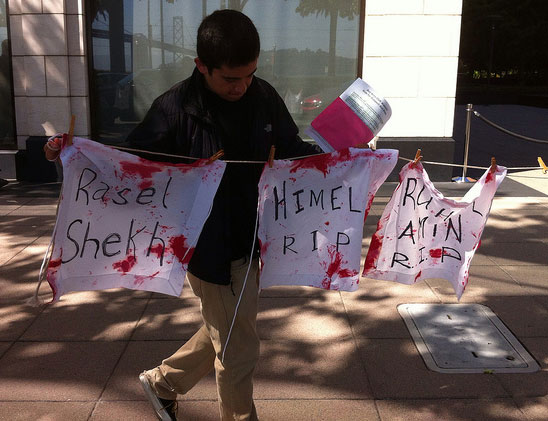 Dozens of companies have signed an agreement to protect Bangladesh factory workers–but The Gap refuses.

This is Gap saying, yeah, they buy garments from Bangladeshi vendors, but Gap is not responsible for the blood of crushed workers on the clothes.

Although Gap, the world’s third largest apparel company, used that Avett Brothers song in commercials last fall, the corporation does not believe we’re really the same.

By refusing to join other clothing retailers in a binding agreement to protect Bangladeshi workers, more than 1,200 of whom have died in factory fires and collapses in recent months, Gap is saying: You and I, we’re not the same; I don’t hear your voice or want to know your name.

H&M and Inditex, both among the world’s largest apparel companies, and 36 other American and European firms signed the pact requiring them to finance rigorous safety inspections and repairs over five years. They jointly took responsibility for trying to ensure safety and decency for workers in the factories sewing the clothes on which they profit. Because we are all the same and all deserve respect at work, Gap, Walmart and other major apparel firms must join them in fulfilling their ethical obligations. And at the same time, the European Union and United States must suspend Bangladesh’s duty-free access to Western markets until it increases its minimum wage and guarantees internationally recognized rights to workers.

Last month, the Rana Plaza building, housing several clothing factories, collapsed in Bangladesh, killing 1,127 workers in the most lethal disaster in garment manufacturing history. Five months earlier, 112 workers died in a fire at the Tazreen Fashions factory in Bangladesh, which trails only China in exporting clothing, with 5,000 factories employing millions of workers, mostly women and girls, earning the lowest minimum wage in the world: $37 a month.

Earlier fires and collapses killed hundreds of Bangladeshi workers, including a blaze two and a half years ago that killed 29 workers in a factory where Gap labels were found.

The Rana catastrophe renewed efforts by IndustriALL, a union federation with 50 million members in 140 countries, and Uni Global Union, a worldwide federation of 20 million retail and service workers, to persuade clothiers that profit from Bangladeshi factories to take responsibility for the safety of the workers.

The horror of the Rana Plaza photos fresh in mind, the coalition succeeded in getting 38 retailers to sign the Joint Memorandum of Understanding on Fire and Building Safety.

But giants Gap and Walmart refused. They said they’d go it alone. In other words, don’t expect much from them. Gap, which owns the Gap, Banana Republic and Old Navy stores, promised $22 million in loans for repairs to the 78 Bangladeshi factories it uses. That is $22 million in loans – from a corporation that made $333 million in profits in the first three months of this year alone.

Gap objected to arbitration and legal liability in the Joint Memorandum. Gap suggested instead that the remedy for noncompliance be expulsion from the program.

What Gap is saying is this: We don’t really want to take responsibility. We want to be able to slink away if safety costs are high or if we disagree with an inspector’s report.

This is Gap saying, yeah, they buy garments from Bangladeshi vendors, but Gap is not responsible for the blood of crushed workers on the clothes. That’s like the guy who buys a watch off the arm of a street hustler then claims he’s not responsible for receiving stolen property because it was the vendor, not him, who beat and robbed the watchmaker.

At first blush, Gap’s and Walmart’s promises sound decent. The problem is that they’re not binding and not transparent. They claim they’re going to do stuff, but the Joint Memorandum requires signatories to actually accomplish goals. In addition, the Joint Memorandum mandates public reporting. After a factory is inspected, the results are to be released.

Gap could inspect a sweatshop, find it unsafe, pocket the report and move its work to a different factory, maybe one a European retailer already paid to upgrade. That would leave the original workers still imperiled. And unaware.

Even if Gap, Walmart and other major retailers eventually sign on, not all of Bangladesh’s factories will be inspected and improved. So workers themselves must be empowered. They must be legally entitled to form unions so they can protect each other and stand up to reckless bosses.

One worker, who survived the Rana Plaza collapse, said she went into the building that day, even though she was fearful after seeing cracks. She did it because she couldn’t protect herself. When she told a boss she didn’t want to enter, he slapped her and ordered her to work. In other cases, workers died in fires because bosses locked doors and claimed those yelling fire were lying.

Just last week, CBS news visited the Monde Apparels factory in Bangladesh and found workers sewing boxer shorts for Walmart in a factory with missing fire extinguishers and exits blocked off by tall piles of boxes.

It should be the opposite. A government should represent its people, not the interests of foreign apparel retailers. Until the Bangladeshi government gives workers the right to organize and collectively bargain for decent wages and health and safety improvements, the EU and United States should suspend its special trade status.

Bangladeshi, American and European workers are the same. We live and die together. When giant retailers shirk their responsibility to protect workers from unnecessary dangers, they are guilty of receiving bloody property.