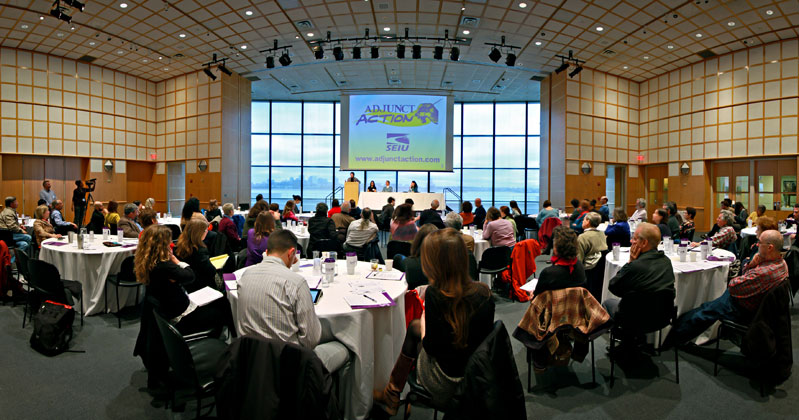 Adjunct faculty from 20 campuses attend a symposium in April at the JFK Library in Boston. (Photo Courtesy of Aaron Donovan)

The adjuncts are at the barricades.

Adjuncts are increasingly emblematic of the modern workforce, as white-collar jobs undergo the same casualization that blue-collar workers have long suffered.

After years of earning less than minimum wage, Jack Dempsey and his co-workers decided to organize. They were sick of disrespect and intimidation on the job, tired of being called up and expected to work at a moment’s notice, and desperate for benefits and job security.

Some might be surprised to learn that this predicament describes Dempsey’s life as an adjunct professor of English at Bentley University in Massachusetts. But in nearly 12 years working there, he’s never received a promotion or benefits. “We’re living on a Band-aid,” he says. “If somebody gets sick, they’re finished. People are so afraid of losing the little bit of bread that they have that they’re afraid to speak up. But we’re going to try to change that.”

On May 9, adjunct faculty at Bentley filed petitions for a union election to join Adjunct Action, a new project of the Service Employees International Union (SEIU). Earlier this year, Adjunct Action began a push to unionize part-time faculty at private schools across the Boston area, an effort that’s part of an emerging focus within the labor movement on contingent faculty in higher education.

That so many advanced degree-holders are toiling in poverty conditions flies in the face of the assumption that higher education is a path to prosperity. But low wages and precarity represent the new norm for what some adjuncts have termed “academia’s version of apartheid.”

Hired on a contract basis, adjuncts (who may include contingent full-time faculty) are paid by the course—the average rate is $2,900, according to crowd-sourced figures from the website the Adjunct Project. Most contingent faculty are also excluded from access to health insurance or other benefits, and are guaranteed neither a full teaching load nor a steady contract.

Since earning his Ph.D. in English in 1998 from Brown University, Dempsey has pieced together a living by teaching composition and public speaking classes at a series of universities—an endeavor that at Bentley last year netted him $18,400 before taxes—and by picking up occasional work as a book editor. Many part-time professors are even worse off: Dempsey mentions a colleague who grades Composition 101 papers through a 30-year-old pair of glasses that he can’t afford to replace. And news stories abound of adjuncts who live in their cars or are dependent on public aid.

Perhaps the greatest irony of the lot of adjunct teaching staff is that they are no longer “adjunct” at all to university operations. Tenure-track faculty positions today constitute just 24 percent of the academic workforce, an all-time low, according to an April report from the American Association of University Professors (AAUP). Reeling from state budget cuts, universities have turned increasingly to the cheap teaching labor provided by non-tenure track faculty. But the adjunctification of higher education also coincides with its bureaucratization. Between 2001 and 2011, the number of administrators hired by colleges and universities increased 50 percent faster than the number of instructors, according to U.S. Department of Education data.

The organizing strategy SEIU and a handful of other unions have begun pursuing is premised on the recognition that adjuncts, though professionals, are first and foremost precarious workers strung between multiple jobs at multiple campuses. Therefore, labor activists believe, contingent faculty will need to be organized at the industry level, rather than the institutional one, in order to make real gains.

“We want to change the entire model of how adjuncts are treated in higher education, and we can’t do that separate institution by separate institution,” says Anne McLeer, director of research and strategic planning for SEIU Local 500 in Washington, D.C.

After organizing her own union as an adjunct at George Washington University in 2004, McLeer has helped build a regional organizing campaign with Local 500, which after a successful union election at Georgetown University this May now represents more than three-fourths of contingent faculty in the D.C. metro area.

This kind of “metro strategy” could help give adjuncts real power to raise standards marketwide, says McLeer. Already, the local has negotiated contract gains at three universities, including pay raises and, at Montgomery College and George Washington University, protections against cutbacks to adjuncts’ courseloads. In the future, McLeer envisions all adjuncts in the area working under a citywide contract.

These victories have inspired SEIU to initiate a similar push in Boston. Prior to this effort, SEIU had organized adjuncts into collective bargaining units in California and North Carolina, among other states. The United Steelworkers are in the early stages of pursuing a regional strategy in Pittsburgh, and the Communications Workers of America and the United Auto Workers have also initiated efforts to unionize non-tenure-track faculty.

Traditional academic unions, by contrast, “have by and large had their heads in the sand” as the adjunctification of higher education has proceeded, says Joe Berry, a labor educator and author of Reclaiming the Ivory Tower, a 2005 handbook for contingent faculty organizing.

All three organizations have taken strides to grow the ranks of organized adjuncts during the past few years. But given that they make up more than three-quarters of the teaching force, contingent faculty continue to be underrepresented. A 2011 survey by the Chronicle of Higher Education found that “about 30 to 40 percent of the college instructors in NEA bargaining units, and more than 40 percent of those in AFT bargaining units, are employed on a contingent basis, with solid majorities of the adjuncts in both unions on contracts to work part time.”

Some activists charge, moreover, that adjuncts lack real decision-making power within these unions—particularly when tenure-track faculty view adjuncts as competitors rather than allies. Until 2011, for example, the NEA-affiliated Massachusetts Community College Council gave part-timers only one-fourth of a vote, though they outnumbered full-time faculty in the union.

Among the questions facing adjuncts who wish to organize is whether to do so within their own bargaining units or joint units with tenure-track faculty; both types of units exist within the NEA and AFT. Non-academic unions like SEIU that have stepped into the fold have most often done so at private universities, where traditional academic unions have typically made fewer efforts at organizing because of legal barriers to full-time faculty exercising collective bargaining rights. Both tenure-track and non-tenure-track faculty at all the schools where Adjunct Action is organizing in Boston are currently non-unionized.

Berry believes that academic unions have no real incentive for widespread contingent faculty organizing. “If you organize a whole lot of new people from the second-tier in higher education, you're not going to get a lot of dues money, but you're going to change the politics of the union,” he notes. “As our numbers get bigger and bigger, they want us less and less.”

For this reason, activists believe that unionizing non-tenure-track faculty must take place with a broader progressive agenda in mind. As white-collar jobs undergo the same casualization that blue-collar workers have long suffered, adjuncts—who share important similarities with other groups of low-wage workers who have been at the forefront of some of the most exciting labor organizing happening of late—are increasingly emblematic of the modern workforce. The success of adjunct organizing, activists believe, could prove a bellwether for the fate of the labor movement—in order to survive, it must adapt to these changing conditions for organizing, and contingent professionals must prove themselves willing to join the fold of a broader movement of precarious workers.

McLeer believes this is possible, citing the emerging solidarity between adjuncts and service workers on campuses SEIU Local 500 has organized. But adjuncts also face many of the same barriers to organizing as other precarious workers, including a lack of cohesion and vulnerability to retaliation from administrators.

As contingent faculty at Bentley prepare for their union election, however, Dempsey is hopeful that it will be the adjuncts who find themselves in a position of power. Universities “have become so addicted to the profits of using adjuncts that … they’ve overextended themselves,” he says. “If we strike, the school stops.”