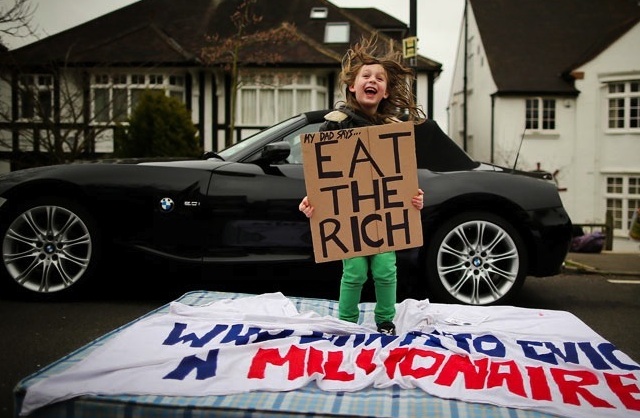 U-turns, abandoned certainties and hopeless muddles are as common these days as eureka moments.

Rather than sketching ideas on the backs of envelopes, Britain’s coalition government relies on those eureka moments that come to ministers in the dead of night. There’s the imaginative plan to reduce the cost of childcare by obliging carers in nurseries and crèches to take responsibility for six toddlers rather than four. Insisting on their acquiring additional qualifications in English and maths will, it is thought, make this perfectly possible. Having usually failed to manage a couple of 2-year-olds simultaneously, I can assure the well-named Ms. Truss, whose idea it was, that it will take more than that to enable most competent adults to cross busy roads with six small children—unless they’re in leg irons.

Then nurses, we’re told, should spend a year learning compassion—best done, apparently, by washing a lot of old bodies. Whether this transformative year  is to replace a year of their current training, or be added to it— and who will pay for that?—are unasked and unanswered questions.

Our secretary of state for education, Michael Gove, fulminated recently in the Daily Mail about people like me, who have trained teachers over the years. A bunch of Marxists, he writes, “enemies of promise” of the kind fingered by Cyril Connolly in his book of that name. (That book is remembered for one line in it: “There is no more sombre enemy of good art than the pram in the hall.” So children, not teachers, were Connolly’s excuse for not writing a masterpiece.)

Then there’s Gove’s decision to “restore rigour” and halt the “dumbing-down” of schools and their “race to the bottom” with a new, harder exam, the Ebacc. This was universally confused with this other idea, the EBacc (yes, with a capital B), and it has now been withdrawn, after rejection by Gove’s coalition partners, the Liberal Democrats, by the exam boards, by the teacher unions and by a great number of famous people involved in the arts. Luckily, U-turns, abandoned certainties and hopeless muddles are as common these days as eureka moments.

On April Fool’s Day the government announced its “reforms” (or cuts) of the welfare state, which is unravelling before our eyes. Free Legal Aid, a vital feature of the post-war changes, has virtually disappeared. The National Health Service has been manhandled into dependence on private provision. The Spare Room Subsidy (known as the bedroom tax) requires families in social housing to pay, on average, an extra £14 a week for any bedroom not permanently slept in, or move to a smaller home. Currently, 660,000 people (two-thirds of them disabled) are affected by the bedroom tax and risk losing £728 a year, on average. The Disability Living Allowance is to be scrapped in favour of a “Personal Independence Payment” granted only after regular face-to-face assessments. (Last year, 1,700 disabled people died within weeks of such an assessment finding them “fit for work.”) Meanwhile, the rich have their own cut: Their income tax is down from 50 pence on the pound to 45 pence.

As shocking as the string of untruths were the language and the sentiments. “Reform” and “fair” have new meanings. The fact that only about 3 percent of the total cost of welfare goes on the unemployed, while nearly 50 percent of it is spent on the old, makes no difference. For Chancellor of the Exchequer George Osborne, the poor don’t want to work and so deserve nothing from us “hard-working” taxpayers. That’s “only fair.” Look at Mick Philpott, says Osborne. He set fire to his own house and killed six of his 17 children in the process. Are we, decent taxpayers, really prepared to go on “subsidising lifestyles like these?” The solution: Limit the child benefit to two children per family. Of course, there is opposition to these “reforms.” But the Conservatives know all too well what they’re doing, and I fear that a majority supports them. Making capital out of Philpott’s insane act is not seen as hitting below the belt. We are living in dark times, when other people’s welfare and, indeed, the well-being of the whole society, have come to seem a good deal less important than shoring up one’s own fortune.