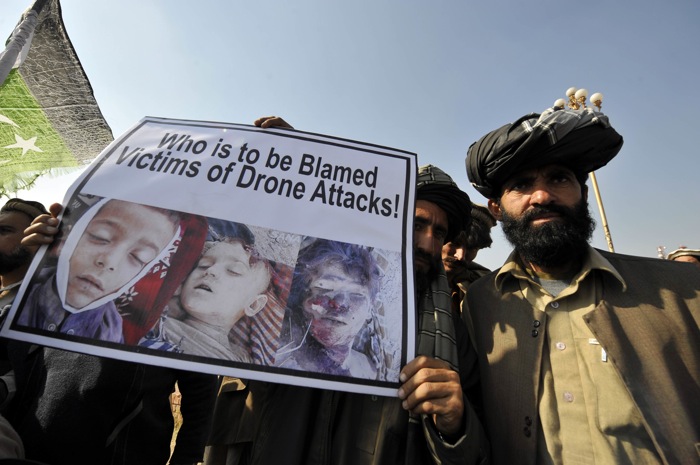 Pakistani tribesmen hold up a placard of alleged drone strike victims during a protest in Islamabad on February 25, 2012, against U.S. drone attacks. (Aamir Qureshi/AFP/Getty Images)

President Obama was personally overseeing a 'kill list' and an ongoing drone bombing campaign against alleged terrorists, including American citizens.

This is a tale of two presidents—the one we hope we have and the one we actually have. It is also a tale of two kinds of violence—the surgical and the indiscriminate—and how the latter blurs the distinction between self-defense and something far more sinister.

This story began last year, when the White House told the New York Times that President Obama was personally overseeing a “kill list” and an ongoing drone bombing campaign against alleged terrorists, including American citizens. Back then, much of the public language was carefully crafted to reassure us that our country's military power was not being abused.

In the Times' report—which was carefully sculpted by Obama administration leaks—the paper characterized the bombing program as “targeted killing” with “precision weapons.” It additionally described “the care that Mr. Obama and his counterterrorism chief take in choosing targets” and claimed that as “a student of writings on war by Augustine and Thomas Aquinas, the president believes that he should take moral responsibility” for making sure such strikes are as precise as possible.

The unstated deal being offered to America was simple: Accept a president claiming unprecedented despotic authority in exchange for that president promising to comport himself as an enlightened despot—one who seeks to limit the scope of America's ongoing violence.

Many of the president's partisan supporters would never have agreed to such a bargain if the executive in question were a Republican. They would have expressed outrage at news that, according to the Times, the president was “count[ing] all military-age males in a strike zone as combatants” even when those males happen to be innocent civilians. But because it was a Democratic commander in chief, many liberals tacitly agreed to the deal, reassuring themselves that this was a president who would only use violence in the most narrow ways.

That, though, brings us to the second part of this parable—the part that unfolded earlier this month when blood-soaked reality crashed the myth. In this latter chapter, we learned that the president isn't personally overseeing “targeted” killing—he is evidently overseeing indiscriminate killing.

That was the key discovery in NBC News correspondent Richard Engel's report finding that “the CIA did not always know who it was targeting and killing in drone strikes” approved by the president. Employing so-called “signature strikes,” the president has been authorizing the assassination of people “based on their patterns of behavior” according to Engel—that is, based simply on where a person “meets individuals, makes phone calls and sends emails.” In all, the identities of up to a quarter of those assassinated were unknown at the time that the president's drone strikes went forward.

The deep-thinking moralist that we were told was in the White House might look at this and worry that in fighting terrorism we have resorted to engaging in terrorism. After all, deliberately killing people without regard for their identity seems like an effort to terrorize a whole population. Indeed, as this week's stunning new video series by documentarian Robert Greenwald illustrates, such violence seems eerily similar to the kind of terrorism that our government publicly decries.

But, then, that's this saga's big reveal. In embracing such tactics, this parable's main character shows that he probably isn't the pious Aquinas-loving saint his aides present him as and that many hoped he would be. This story instead increasingly looks like a cautionary tale about a wholly unenlightened authoritarian who displays little concern about which particular lives he is choosing to end.

This, of course, is not a particularly new or unique story. It is, in fact, the oldest story in human history: the story of how power corrupts and how absolute power corrupts absolutely.