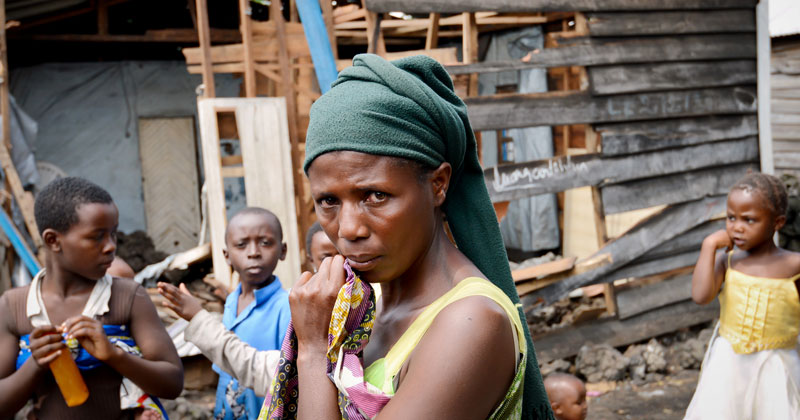 A woman and children stand near the debris of a house destroyed during fighting on May 21 in Karisimbi, south of Goma, in the Democratic Republic of Congo. (Junior D. Kannah/AFP/Getty Images)

Rhetoric aside, a close look at what the president has done in sub-Saharan Africa.

Obama’s policies towards sub-Saharan Africa decidedly emphasize U.S. national-security concerns at the expense of the clear and compelling interests of Africans themselves.

Barack Obama is currently on his second visit to sub-Saharan Africa as president, stopping in Tanzania, Senegal and South Africa. Two visits to the region in five years may seem few for a man who penned a 403-page memoir about the legacy of his Kenyan ancestry, but from the start of his presidency, Obama has sought to tamp down expectations that he possesses some special capacity to solve African problems by virtue of having a Kenyan father. In contrast, he at first brought a refreshing minimalism to U.S. relations with Africa, shrewdly emphasizing the importance of self-reliance, of Africans solving their own problems.

But now, in his second term, this minimalism has given way to creeping militarism. The president has quietly lavished U.S. military assistance and funds on Uganda and Ethiopia, two of the most authoritarian regimes in the region. Both serve as a U.S. proxy in the Somalian conflict—where, for more than 20 years the United States has been trying to settle a civil war, and more recently, to defeat al Shabab, a group affiliated with al Qaeda.

Elsewhere in sub-Saharan Africa, the war on terror has prompted the Obama administration to spend valuable resources on another effort: drug interdiction. The U.S. Drug Enforcement Agency has expanded its activities in West Africa in recent years, essentially bribing African governments to divert precious attention to disrupting or extinguishing shipment routes for marijuana, cocaine and heroin, usually bound for Europe. The DEA has even mounted sting operations against government officials from Guinea-Bissau and Ghana, with U.S. operatives posing as drug smugglers. Given the sorry history of the war on drugs in Latin America, the risks of destabilizing African governments would seem to outweigh the benefits of somewhat reducing the flow of drug cash to those planning violent attacks on the U.S. and its allies.

The logic of Africanizing the war on drugs is tightly tied to the Obama administration’s plan to find African allies in the war on terror. In concrete terms, this can mean identifying governments willing to host American-staffed command-and-control centers for drone flights.

A year ago, the Washington Post reported that the United States was operating a drone facility from outside Ouagadougou, Burkina Faso, reportedly for surveillance purposes. The U.S. also reportedly launches un-armed Reaper drones from Ethiopia. The United States Africa Command (AFRICOM) maintains a major presence in the tiny nation of Djibouti, and presumably also controls drone flights from this strategic location across the Red Sea from Yemen. In March, the government of landlocked and impoverished Niger loudly proclaimed its willingness to host American drone bases. Niger borders Mali, where the United States is concerned about Islamic-fundamentalist fighters attempting to hive off the Francophone country’s northern portion.

Militarizing African affairs would hardly seem the likely legacy of the first U.S. president of African descent. Yet Obama’s policies towards sub-Saharan Africa decidedly emphasize U.S. national-security concerns at the expense of the clear and compelling interests of Africans themselves.

By contrast, on non-military fronts—humanitarian aid, human rights—Obama’s most important accomplishments on the continent so far have been continuations of policies put in place by his predecessor, George W. Bush. President Bush constructed a process, inherited by Obama, that led to the end of the Sudanese civil war and the independence of South Sudan. Bush also pushed through a multi-billion dollar HIV-AIDS treatment program for 12 African countries, which is believed to be the largest health program ever enacted by one country to address a disease. Obama emphatically renewed the program in his first term, despite the great cost, but cut global AIDS funding by $210 million in his 2013 budget proposal.

President Obama, in a speech on Monday in the east African nation of Tanzania, seemed to acknowledge his own search for an original and appropriate approach to Africa. “We are looking at a new model that’s based not just on aid and assistance but trade and partnership,” Obama said. “Ultimately the goal here is for Africa to build Africa for Africans. Our job is to be a partner in that process.”

But just how to help Africans build a better Africa remains tricky for Obama who on July in Tanzania gave two examples, both the kind of cautious incremental steps that bely the President’s potential to dramatically set U.S.- Africa relations on a new course. First, he called on African governments to expand access to electricity more rapidly. He also cited the potential for American technology to assist Africans to better crack down, and perhaps even eliminate, rampant poaching of wildlife. An aide to Obama said on July 1 that the administration is waging a “a massive diplomatic campaign” to promote strong wildlife protections in Africa, home to many rare and endangered animals.

Both of these new initiatives reflect President Obama’s caution in approaching sub-Saharan Africa—caution that is perhaps understandable given the difficulty in carrying off ambitious interventions in a region long abused by outsiders. Both humanitarian aid and human rights initiatives have been subject to a host of criticisms in recent years. They can suffer from a paternalistic and colonial mindset, from a conviction that Westerners “know what’s best” for Africans. Economic, food and medical aid can rob recipients of agency and create a culture of dependency while, like any flow of valuable materials, creating vast political ripple effects. U.S. aid most often comes with a host of strings attached, and, in recent years, has become increasingly aligned with military operations, with more than 20 percent of foreign assistance now administered by the Department of Defense. And present-day conflicts, such as the one in the Democratic Republic of Congo, where the U.S. helped train and arm the forces of dictator Mobutu Sese Seko during the Cold War era, are fueled in part by the legacy of major powers’ meddling.

On the other hand, there is a compelling case to be made that the United States must aid sub-Saharan Africa—in some cases due to the “If you broke it, fix it” principle and in others born of the simple moral imperative to give help where help is desperately needed. One can critique the details of the implementation of the President’s Emergency Plan for AIDS Relief (PEPFAR), but the program has offered life-sustaining medication to millions.

How might President Obama navigate these tricky waters? He could begin by taking advantage of an almost entirely untapped resource: the more than one million sub-Saharans living permanently in the United States. (Full disclosure: My wife is one of these Africans living in America). Thanks to the spread of cellphone and Internet technologies in their countries of origin, these immigrants have unmatched knowledge of conditions on the ground. Yet the Obama administration neither has a strategy to leverage the African diaspora in America nor can it count among its members even a single African immigrant. Obama could deploy the talents of these hybridized Americans and their valuable ties to Africa by, say, hiring them as on-the-ground liaisons, bringing them in as special advisers or appointing them to critical decision-making roles.

Since Nigerians, such as my wife, make up the single largest group of sub-Saharan-born Americans, relations with the troubled country of Nigeria—Africa’s most populous—might seem to be a high priority for the Obama administration. But while the Nigerian government struggles to come up with a coherent and effective response to the violent insurrection in the predominantly Muslim North, the Obama administration has done nothing substantive to help prevent Nigeria from lapsing into a full-scale civil war.

U.S. intervention in Libya and in the Great Lakes region of Africa—where Obama dispatched 100 elite troops in 2011 to help capture northern Ugandan warlord Joseph Kony—have been taken on under the banner of human rights. But while these exploits have helped shore up U.S. relationships with local regimes, they’ve had decidedly mixed outcomes for civilians at risk of violence. Meanwhile, Obama has proved willing to turn a blind eye to abuses in places like Nigeria and Zimbabwe, where the ruling clique has wrecked what was once Africa’s most productive agricultural economy. Similarly, human rights abuses persist in the Congo, Central African Republic and Mali.

It is by no means a straightforward prospect to stabilize a country, as Somalia has shown. If Obama remains leery of intervention in more nations, even keeping his hands off of Africa would be better than using Africans as proxy warriors, as is now the case in Somalia, and in the process destabilizing the region, or diverting resources to a drug war when Africans could better use those resources by choosing their own priorities.

There’s at least one simple, non-interventionist way that the United States could benefit sub-Saharan Africa. Rural Africa is experiencing a boom in farm incomes, but U.S. trade polices continue to depress prices that African farmers receive for crops such as cotton. Small-scale African producers are, surprisingly, the biggest rivals to American cotton growers for sales to India and China, the world’s two biggest consumers of cotton. American subsidies to cotton farmers, running in the billions or dollars annually, significantly harm millions of African cotton growers, while providing a flow of cheap cotton to sweat-shop operators in Asia. Obama could move to halt these subsidies.

Should Obama choose, in the remaining years of his presidency, to put his own distinctive stamp on African affairs, there is a way to go beyond his current near-total focus on security issues. With Nelson Mandela in critical condition as this issue goes to press, President Obama can find no better way to honor Africa’s great civil rights leader than by consulting sub-Saharans—both those who dwell in the region and those who have made the U.S. their home—to forge new approaches to African challenges.

At the very least, the president should turn sharply away from a program of militarism that treats everyday Africans chiefly as instruments of American power.