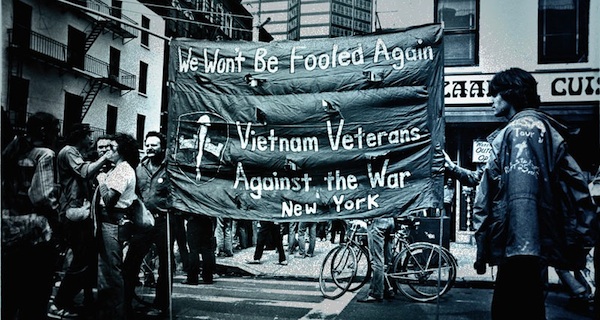 According to Lewis, the working class was divided along partisan lines with regards to Vietnam.

The Myth of the Hardhat Hawk

Was the working class really the biggest proponent of the Vietnam War?

Penny Lewis’ book is a sound reminder that further progress will find its enemies among the ranks of the ruling class, not workers.

In 1969, Richard Nixon commended “the great silent majority” of Americans who supported the Vietnam War while Vice President Spiro Agnew denounced the “effete corps of impudent snobs” who opposed it. This story has become ingrained in our national mythos: Blue-collar workers driven by patriotism supported the war, while resistance came from liberal intellectuals and degenerate hippies. But City University of New York sociologist Penny Lewis argues in Hardhats, Hippies and Hawks: The Vietnam Anti-War Movement as Myth and Memory that this dichotomy is a crafted fiction.

Iconic events of that period did fuel notions of a pro-war working class. In 1965, AFL-CIO President George Meany said that “for America to surrender, to withdraw, to abandon its solemn commitment to South Vietnam would be the first step toward a world holocaust.” And in 1970, construction workers in Manhattan physically assaulted demonstrators at an anti-war rally. Then there was the invented history, apocryphal stories of veterans thanklessly defending liberty abroad only to be spat on when they returned home.

Lewis’ own experience helped her re- cover the lost “countermemory” of this period. The daughter of two service members, she grew up with veterans, many of whom were suffering from economic hardship and deeply opposed the war. The poll data she summons suggests her experiences were the rule, not the exception: Elites were more likely to support the war, workers more likely to oppose it. By 1971, 60 percent of those with college degrees supported withdrawal, but even more—80 percent—with only a grade- school education did as well.

Close to a quarter of those who served in Vietnam participated in the military anti-war movement. Black youth from disadvantaged back- grounds numbered disproportionately in the ranks of non-registrants and deserters. They knew they had little at stake in the Vietnam War.

Lewis’ argument is not that the working class was uniformly radical, but rather that it was split along a left-right divide. Not everyone was against the war, but significant numbers were. Similarly, many workers were shop-floor militants. In 1970, 5,600 work stoppages led to 6.2 million lost worker-days. In 1971, 2.5 million workers were involved in major strikes. The era didn’t begin, or end, with flower power.

But the “hardhat hawk”/ “hippie dove” dichotomy was masterfully peddled by conservative forces in advance of the Reagan revolution. Liberals, too, were complicit in its construction. Nixon’s re-election in 1972 and the specter of white working-class conservatism gave cover to Democratic Party elites wary of bubbling social movements. Chicago Mayor Richard J. Daley oversaw the infamous police riot during the party’s 1968 convention and Hubert Humphrey warned of radicalism from within the George McGovern camp. Both men, and others within the party, were quick to tout the turmoil of the period as a crisis of democracy.

The real crisis, of course, was one of political legitimacy. The Democratic Party, essentially a party of capital, even during the height of the New Deal coalition, failed to represent the class interests of workers, bridge racial divides, or connect increasingly militant rank-and-file labor actions to the new social movements.

A different type of party, though certainly desirable, has too often been a cure-all for the Left, a trap Lewis drifts toward. The challenges of organizing against American capitalism would not have been solved by a victorious McGovern campaign or even the emergence of a truly mass workers’ party.

Today, commentators on outlets like CNN use the term “working class” to denote a small subset of white, male workers in the Rust Belt who may or may not want to have a beer with a John Kerry or a Barack Obama. Democrats pander to the narrative by pining for the days when they commanded the support of those who would later become “NASCAR dads” in the South. These are signs of a tendency, in both academia and the media, to see class not as a category of exploitation, but rather as a narrow identity.

“Working-class” voters in Columbus, Ohio, then, are “on the fence” every election cycle, while “African-American” voters line up for hours in Cincinnati. The refusal to acknowledge people of color, care workers, public employees and others as legitimate faces of the working class serves conservative ends. “The aim of the Right,” as the late labor journalist Robert Fitch noted, “is always to restrict the scope of class conflict—to bring it down to as low a level as possible. The smaller and more local the political unit, the easier it is to run it oligarchically.”

But it’s getting harder to pretend that opposing militarism and oppression is a past-time for the privileged. A generation has grown up after the Cold War, immunized against the red-baiting that undermined radical organizing in the past. Continued cultural liberalization is widely popular, a cause of constant concern among Republicans.

Lewis’ book is a sound reminder that further progress will find its enemies among the ranks of the ruling class, not workers.