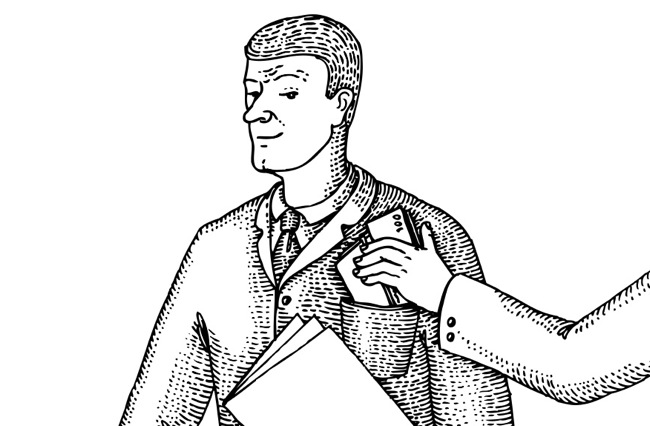 When corporations spend big money on campaign contributions, they aren’t just buying votes for specific contracts. They are also implicitly pressuring politicians to rhetorically push the discourse in a pro-surveillance, anti-civil liberties direction.

Have you noticed anything missing in the political discourse about the National Security Administration’s unprecedented mass surveillance? There’s certainly been a robust discussion about the balance between security and liberty, and there’s at least been some conversation about the intelligence community’s potential criminality and constitutional violations. But there have only been veiled, indirect references to how cash undoubtedly tilts the debate against those who challenge the national security state.

Those indirect references have come in stories about Booz Allen Hamilton, the security contractor that employed Edward Snowden. CNN Money notes that 99 percent of the firm’s multibillion-dollar annual revenues now come from the federal government. Those revenues are part of a larger and growing economic sector within the military-industrial complex—a sector that, according to author Tim Shorrock, is “a $56 billion-a-year industry.”

For the most part, this is where the political discourse about money stops. We are told that there are high-minded, principled debates about security. We are also told of this massively profitable private industry making billions a year from the policy decisions that emerge from such a debate. Yet, few in the Washington press corps are willing to mention that politicians’ attacks on surveillance critics may have nothing to do with principle and everything to do with shilling for campaign donors.

For a taste of what that kind of institutionalized corruption looks like, peruse InfluenceExplorer.com to see how much Booz Allen Hamilton and its parent company The Carlyle Group spend. As you’ll see, from Barack Obama to John McCain, many of the politicians now publicly defending the surveillance state have taken huge sums of money from the firms.

These are just examples from two companies among scores, but they exemplify a larger dynamic. Simply put, there are huge corporate forces with a vested financial interest in making sure the debate over security is tilted toward the surveillance state and against critics of that surveillance state. In practice, that means when those corporations spend big money on campaign contributions, they aren’t just buying votes for specific contracts. They are also implicitly pressuring politicians to rhetorically push the discourse in a pro-surveillance, anti-civil liberties direction.

All of this doesn't mean there is direct conspiratorial micromanagement of politicians by the military-intelligence community. It doesn't, for instance, mean that everything that comes out of surveillance defenders’ mouths comes from talking points provided by Booz Allen’s lobbyists. Instead, there is something much more insidious and reflexive at work.

As anyone who has worked in Washington politics and media well knows, the capital is not a place of competing high-minded ideologies. In terms of the mechanics of legislation and policy, it is a place where monied interests duke it out, where those with the most money typically win, and where a power-worshiping media is usually biased toward the predetermined winners.

In the context of money and national security, there is a clear imbalance—there are more monied interests in the business of secrecy and surveillance than there are organized interests that support transparency and civil liberties. That imbalance has consequently resulted in a political environment so dominated by security-industry cash that the capital’s assumptions automatically and unconsciously skew toward that industry's public policy preferences. Those preferences are obvious: more secrecy, more surveillance, and more lucrative private contracts for both.

If the simplest explanation is often the most accurate, then this financial imbalance is almost certainly why the pro-surveillance terms of the political debate in Washington are so at odds with public-opinion polling. Big Money has helped create that disconnect, even though Big Money is somehow written out of the story.