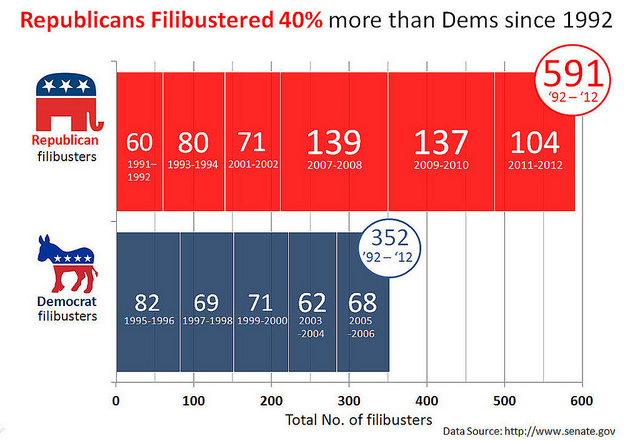 With the Labor Board’s basic functioning at stake, it’s time for Harry Reid to ax filibusters.

Republicans lawmakers have used the filibuster as a constant strategy not only to thwart legislative action in Congress, but also to undermine the work of key agencies such as the NLRB.

Update: Early on Tuesday morning, Reid and Republicans reached a deal that let nominations proceed and averted a change to the filibuster rules, although labor is lukewarm about the costs. Read more here.

In the next week, Senate Majority Leader Harry Reid may lead 51 Senate Democrats in adopting the so-called “nuclear option” in order to secure up-or-down votes on several key presidential nominations, including those to the National Labor Relations Board (NLRB). President Obama has presented the Senate with a full package of five outstanding nominees—three Democrats and two Republicans—but for several months Republican Senators have threatened to filibuster them and thus render the Board inoperable.

Without Senate action on the nominees, the Board will lack a single confirmed member when the term of Chairman Mark Pearce expires in August. As a result of a bizarre federal court ruling on the legitimacy of the president’s January 2012 recess appointments to the NLRB and the GOP’s complete obstructionism, for the first time in the Board’s history, the president will be unable to make appointments to the board. The Board would lack a three-member legal quorum required to investigate and remedy unfair labor practices, thereby squelching the fundamental rights of millions of American workers. While the Supreme Court has agreed to rule on the constitutionality of the president’s recess appointments, this will likely not happen until next year.

No one inside or outside of Congress has seriously questioned the qualifications of the five nominees to serve, so why is the GOP determined to scuttle their nominations? The answer is that this is simply the latest action in a three-year crusade by GOP in Congress to prevent the NLRB from operating. After it ensured that Congress would not be allowed to vote on revisions to federal law designed to strengthen workers’ right to form a union, Republicans immediately turned their attention to the agency charged with enforcing the law—the NLRB. First, they filibustered the nomination of union attorney Craig Becker, and then they held dozens of hearings and made hundreds of requests for documents in an effort to intimidate Board members and prevent them from improving enforcement of the law.

Unfortunately for Republicans, the only real scandal they (inadvertently) uncovered involved two Republican members of the NLRB—Terence Flynn, who was forced to resign because of serious ethics violations, and former Board chairman, Peter Schaumber, who quit his post a labor advisor to Gov. Mitt Romney’s presidential team under a cloud of scandal. What really offends the GOP is that the current board has taken seriously its job of enforcing the law. In one recent legal challenge, the Board’s conservative adversaries stopped its efforts to inform workers about their basic workplace rights under federal law.

The National Labor Relations Act at best offers weak protections, but it is the only law that defends the collective rights of most private-sector workers, and without a functioning NLRB, it would likely go entirely unenforced.  Continuing to fight two elections that they lost, Republicans lawmakers have used the filibuster as a constant strategy not only to thwart legislative action in Congress, but also to undermine the work of key agencies such as the NLRB. In a brazen attempt to shut down an agency they do not like, they have cynically abused the Senate’s advise and consent function.

In response to widespread criticism, Senate Minority Leader Mitch McConnell (R-Ky.) claims that the Administration and its supporters are “getting treated pretty well on nominations as it is.” In contrast with his words, McConnell’s GOP colleagues have introduced bills that would further erode the rights of American workers. Without a hint of sarcasm, Rep. Tom Price (R-Ga.) explained at a recent House hearing that legislation constraining the NLRB was necessary to counteract “phenomenal” worker intimidation. Sen. Lindsey Graham (R-S.C.) last week ludicrously labeled the NLRB “the Grim Reaper of job creation.” GOP critics of the NLRB must put up or shut up. Let Price produce one example of a worker who has been intimidated as a result of the Board’s Specialty Healthcare decision—concerning the determination of bargaining units—which is the focus of his and Graham’s legislation. And let Graham show how that decision has destroyed a single American job. It is time for the GOP to stop lying to the American people about the NLRB.

After several years of extreme Republican obstructionism over the NLRB, Democrats must be prepared to support a rule change in Senate procedures that would allow confirmation of nominees by a simple majority vote. The consequences of Democratic inaction could well be catastrophic. If they do nothing, and the GOP’s obstructionism wins the day, it may well signal the death knell for workers’ right to form a union in the United States.

And that is precisely what the GOP is trying to achieve.