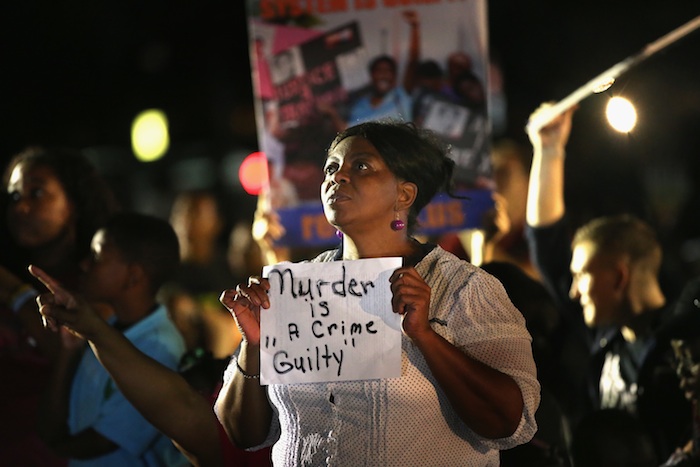 On July 13, 201, supporters of Trayvon Martin waited in front of Sanford, Florida's Seminole County Criminal Justice Center for the verdict in the George Zimmerman trial. The mostly white jury found Zimmerman, who is Latino, not guilty in the murder of the unarmed black teenager. (Photo by Scott Olson/Getty Images)

Racism, the U. S. Justice System, and the Trayvon Martin Verdict

What happens when African Americans don’t get a jury of their peers?

The jury, simply put, decided that a white police wannabe could justifiably profile an unarmed African-American 17-year-old as a criminal, hunt him down, and fatally shoot him.

While the unquestionably unfair verdict in the Trayvon Martin case, rendered in Florida by five whites and one Latina, should be deeply troubling to persons of all races who care about racial justice, U. S. history, as well as the current racial reality in this country, teaches that it should not come as a surprise.

The jury, simply put, decided that a white police wannabe could justifiably profile an unarmed African-American 17-year-old as a criminal, hunt him down, and fatally shoot him.

Martin family attorney Benjamin Crump likened the case to that of Emmett Till, the 14-year-old Chicago boy who was kidnapped and brutally murdered in Mississippi in 1955. Others have posited the question: What would the result have been if the accused was African-American and the victim was white? The Scottsboro case—nine black boys wrongfully accused of raping a white woman in Alabama in the 1930s—comes to mind. In both cases all-white juries delivered clearly racist verdicts, acquitting Till’s murderers and convicting the Scottsboro Boys.

To be sure, those cases arose in the Deep South during the violently racist Jim Crow era more half a century ago. But the verdict in the Martin case once again exposes that the justice system in this country is still fundamentally racist. Black president or not, juries will continue to set white perpetrators free while wrongfully convicting African Americans so long as a “jury of your peers” means an exclusively or predominately white jury.

Here in Chicago, in 1969, Black Panther Party leaders Fred Hampton and Mark Clark were slain in a hail of gunfire. It was later conclusively shown that the predominantly white raiding police fired more than 90 bullets, while the Panthers fired just one. Yet no murder charges were ever brought, the raiders were acquitted by a Democratic-machine judge, and a civil jury, comprised of five whites and one black, hung, with the black juror, along with one white, holding out for the Panther victims.

In Greensboro, North Carolina in 1979, a caravan of Klansmen and Nazis drove into town and massacred five anti-Klan demonstrators, wounding at least 10 more. Much of the cold-blooded attack on this militant multi-racial group was captured on video tape, yet all-white juries twice acquitted the white supremacist perpetrators—first of murder, then, in a subsequent federal trial, of criminal civil rights violations. A six-person civil jury later brought back a compromise verdict against some of the defendants, driven by the only black juror over the resistance of the four southern white jurors.

In Chicago in 1982, Andrew Wilson, an African American who was charged with murdering two white Chicago police officers, was brutally tortured with electric shock and burning by Chicago police Lieutenant Jon Burge and several of his “asskickers.” Then Cook County State’s Attorney Richard M. Daley refused to prosecute Burge, so Wilson pursued a civil suit. Although Wilson stood convicted of the murders when his civil case went to trial in 1989, a racially mixed six-person jury hung, three to three along racial lines. On retrial, an all-white jury found Burge and his associates not liable for the torture they committed.

In Los Angeles in 1991, Rodney King, an African American motorist, was brutally beaten by several white cops, with the beating captured on videotape. Nonetheless, a state court jury that had no black representation acquitted the officers of state criminal charges. The acquittal so outraged the African-American community that riots ensued. Subsequently a racially mixed federal jury convicted two of the four charged officers of criminal civil rights violations.

More recently, aided by DNA evidence and the revelation of rampant police and prosecutorial misconduct, hundreds of African-American men who were wrongfully convicted by predominantly white juries have been freed. Just last month, in Chicago, Daniel Taylor was exonerated after two decades in prison. At 17, Taylor was convicted of murder on the basis of a coerced confession, despite the fact that the jury was presented with uncontroverted evidence that Taylor was in police lockup at the exact time of the murder. Only one African American sat on Taylor’s 12-person jury. In stark contrast, an all-white jury in Joliet, Illinois last month acquitted a white police officer whose wanton beating of Shantique Jackson, an African-American woman, was recorded on videotape.

The paramount reason that few or no blacks served on these juries is that, historically and today, underrepresentation of blacks is built into the selection system from start to finish. Until the 1960s and the passage of the Voting Rights Act, jury pools, which were drawn from voter lists, were virtually all white in the Jim Crow South. And in many of the infamous verdicts since then, the demographics of the jurisdiction made the pool of blacks small to begin with. In the Rodney King case, for instance, the venue in the state criminal case was moved from Los Angeles to the virtually all-white Simi Valley.

Additionally, trial judges control who is excused for cause, and often reflect both their own and the system's biases. Someone with a criminal background is vulnerable to being excused for cause by the judge, particularly in criminal cases, as is a person who has been a victim of a crime, has a family member in prison, or has a bias against police or law enforcement. These conditions disproportionately affect black Americans. Trial judges also control the questioning of prospective jurors, and they all too often avoid or limit probing questioning that could expose a juror's racial bias in order to protect jurors from embarrassment. (Of course, judges can also have a positive effect: In the Greensboro civil case, a liberal judge brought in from Virginia was bound and determined not to have a third all-white jury, so, after conducting extensive questioning and excusing more than 200 white jurors because of their declared racial biases, he forced the lawyers for the City and the KKK to let a black person sit; it was that juror who was responsible for there not being a third not guilty verdict.)

Then there are the pre-emptory challenges exercised by the lawyers. Although, since the U.S. Supreme Court's decision in Batson, prosecutors—and lawyers defending police, white supremacists, and the like—cannot overtly use race as a reason to challenge a juror, they still work very hard to exclude the few blacks who make it onto the venires in racially polarized cases because they know that the more white the jury is, the better chance they have to win. It is also important to note that the blacks who do sit, particularly if they are the only one, are under a tremendous amount of pressure to go along with the dominant white majority—a pressure that they have historically been subjected to since birth—and it takes a particularly strong individual, like the juror in Greensboro, to resist that pressure and maintain his or her beliefs.

The decision by the predominately white Zimmerman jury, like all those that have come before it, demonstrates once again that jurors are swayed by their racial biases. This is particularly true in cases where the evidence pits whites against blacks, where the standard is “reasonable doubt” as in all criminal cases, and where racial stereotypes are permitted to go unchallenged by operation of the legal fiction that race is not an legitimate issue in the case and therefore cannot be mentioned. Sadly, until the justice system and its juries reflect the actual diversity of this country, and the powerful issue of race is openly and fairly dealt with in racially charged cases, we can expect this racially driven double standard of “justice” to continue unabated with the predictable result of more jarringly unfair verdicts like the one that was so quickly and coldly rendered in the Trayvon Martin case.