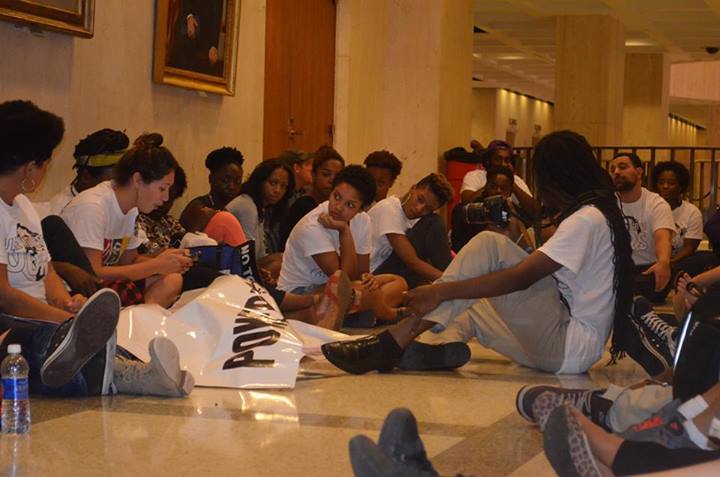 The ‘Dream Defenders’ won’t be moved until the bigger issues in the Martin shooting are addressed.

'We're not just young people here for the thrill of it. We view this as a chess game and one that we can win.'

Nelini Stamp knew something historic was happening when she joined the group of young people marching from Daytona, Fla. to Sanford last April to demand justice for Trayvon Martin. They walked 40 miles in three days, and capped the march with a sit-in at the police station. Six of the marchers blocked the doors to the station and refused to leave until their concerns were heard.

When she returned to New York, Stamp, a longtime organizer with the Working Families Party, told me, “I'm moving to Florida. I think what's happening down there could be the new SNCC [Student Non-Violent Coordinating Committee].”

“After three days marching under the sun you learn a lot about people. The biggest thing we learned is that we didn't want to do anything but this work,” marcher Phillip Agnew tells In These Times.

That group of marchers grew into the Dream Defenders, a multiracial, multiethnic, multi-chapter organization of young people who are fighting for justice in Florida. They have occupied Florida's state capitol since Tuesday, July 16, demanding that Governor Rick Scott convene a special session of the legislature to create a “Trayvon Martin Act” addressing the bigger issues that they believe gave rise to Martin's shooting and the acquittal of his killer, George Zimmerman. These include the school-to-prison pipeline, racial profiling and the Stand Your Ground law.

I asked Agnew, now the executive director of the Dream Defenders, how they decided to occupy the capitol. “It was our gut,” he answered. “When we heard the verdict it was like a punch in the stomach.  We knew we had to do something.”

Dream Defenders chapters at Florida State University and Florida A&M University held a silent march from their universities to the capitol after the verdict; Agnew was in Miami at the time, and in discussions with others, decided that they needed to take their concerns straight to the governor. “We knew we were going to say,” he said, “We just didn't know we would be here ten days later—that this thing would really turn into this full-fledged occupation.”

Gov. Rick Scott met with them on Thursday, July 18, and sent his secretary of the Department of Juvenile Justice, Wansley Walters, to do so as well. But each time, the answers from the officials weren't what the Defenders wanted to hear, so they stayed.

“We're not just young people here for the thrill of it,” Agnew says. “We view this as a chess game and one that we can win. We knew that this initial meeting—and I say initial because he will meet with us again—was a part of his PR.”

Scott's response to them included a suggestion that they pray about racial profiling, Agnew says. “Our response to that is that faith without works is dead.”

On Tuesday, July 23, a week after they first entered the capitol, the Dream Defenders announced that if the governor won't convene a special session of the legislature to discuss their issues, they'll do it themselves. They plan to begin mock hearings next week, reviewing evidence and expert testimony to have information ready to hand over to legislators when (there is no “if” in the Dream Defenders' lexicon) they do take up these issues.

“We're securing petitions from lawmakers who support the special session,” Agnew says. They're also planning a rally on Friday, July 26 at the capitol, with Harry Belafonte and other special guests yet to be announced.

As crowds continue to swell the streets of cities across the country days and weeks after the Zimmerman verdict, the Dream Defenders are embracing what former SNCC leader and current Congressman John Lewis once called “good trouble, necessary trouble”: determined, nonviolent resistance and proactive organizing to make change, when the ballot box isn't enough.

The Dream Defenders began with the death of Trayvon Martin and have grabbed the country's attention with the acquittal of his killer, but their work has gone well beyond one case.

“We have from our onset talked about the criminalization of young people, people of color, of poor people, of folks that are not in a position of power in our community,” Agnew says.

They believe that issues of criminalization are interlinked with many other issues in Florida and the rest of the nation. The school-to-prison pipeline and the expansion of prisons (particularly private prisons) are connected to the rise of the war on drugs. Militarized immigration policy, detentions and deportations, are part of that too—several Dream Defenders are undocumented, and only some of those would be eligible for the DREAM Act.

Once you expose children to the legal system at a young age, Agnew argues, it changes them—not only how other people view them, but how they view themselves. In Florida, where felons are unable to vote (and purges of supposed felons from voter rolls have kept many who should be eligible to vote from doing so), a criminal charge at a young age disenfranchises a person for life. It creates, he pointed out, a generation of young people without the opportunities that Americans claim are necessary for “success”—their voices silenced, their power taken away.

Last fall, the Dream Defenders held an action outside the third presidential debate in Boca Raton, Fla., calling for the candidates to address the “war on youth” and to acknowledge that they were in the hometown of the nation's second-largest private prison company, GEO Group. That debate took place on a national day of action against police brutality, and the protest included civil disobedience and arrests.

“What hit me the most was at no point in time did [the presidential candidates] really get into education or into the criminalization that's going on in our country,” Dream Defender Paula Zamudio told me at the time. “It's not even a topic of debate. We all know crime has gone down since the '90s, yet we have more prisoners now than we have since the '80s. People aren't aware of how much money is invested into detention centers and how much money is invested into prisons as opposed to something that is much more needed, like education.”

Agnew traces many of these issues, like privatization of prisons and the decline of public education, back to the profit motive—the drive to boil down everything, even the lives of children, to a way for corporate entities to make money. “Kids are cash crops in Florida,” he says.

The name “Dream Defenders” evokes the Langston Hughes' “dream deferred” rather than an entrepreneurial white-picket-fence optimistic “American Dream.” And yet they are optimistic.

Agnew likens the country to a house in need of repair. “Everyone wants to live in the house,” he said. “It's got a great front yard, maybe a pretty bad backyard but everyone loves the front. People come to this house looking for something. In the past people were able to point out the creaky stairs, the leaky roof. It's during those times that people are able to kind of repair America. Over the past 30, 40 years, it's become a negative thing to say, 'Have you noticed that the roof is leaking in America?' We immediately say, 'We patched that roof up 30 years ago, move on.' ”

Young people, Agnew said, are getting to a place where they can no longer avoid pointing out the leaky roof, and rather than calling for others to fix it, they want to fix it themselves.

“We can't avoid these issues anymore,” he said.

The question right now in Florida is the same one being asked across the country: What would justice for Trayvon Martin—and for young people facing racial profiling and violence daily in their neighborhoods—look like?

“People who do receive guilty verdicts, many of them still don't feel like justice has been done because they'll never get back what they lost,” Agnew points out. Justice, then, is something bigger than one man going to jail.

“Justice for me would feel like our state becoming the epicenter for discourse, a leader instead of the bottom of the pack in building a better state for young people,” he continues.

The bill that the Dream Defenders are calling for Florida legislators to create—the Trayvon Martin Act—rests on three issues that directly affect Florida's young people and that lawmakers could actually change. One is the school-to-prison pipeline, where young people are referred to the police for infractions that happen in the classroom. Reports have found that Florida has the highest number of referrals to law enforcement in the nation.

The second is racial profiling. The third is, of course, the repeal of the controversial Stand Your Ground law.

While fighting for—and working to create—a bill that addresses these issues, the Dream Defenders are also working to expand their organization. Chapters have sprung up at universities and in cities across Florida.

“Our goal is to build a pipeline of trained young people who are ready prepared to act and organize around issues that are important to them. It could be hyperlocal or it could be federal at some point,” Agnew said. That stretches beyond even a Trayvon Martin Act, to truly changing the state and country they live in.

Stamp, back in New York now, feels her initial reaction was proved right. She told me this week, “This was the organization and group of people I had been waiting for to bring about a new change in this country for young people of color. It was time that people stopped talking about the new majority, and started to organize.”

She called her choice to travel down to Florida and help the organization get started, “the best thing I've done.”

And inside the capitol, the Defenders are resolute. “This ends when we get to stand behind that governor as he signs that bill into law,” Agnew says. “We're having the time of our lives during the fight of our lives.”