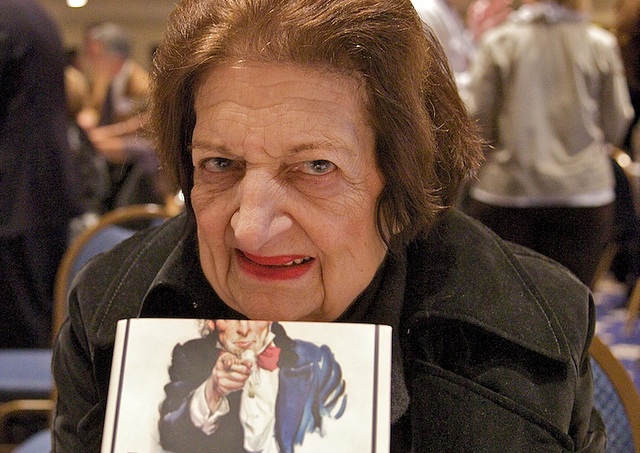 The White House reporter smashed the glass ceiling for women and set the bar for tenacity.

She had the one talent that every woman in the public eye needs, and which most of us never completely acquire: the rare, invaluable gift of being entirely comfortable with other people's anger.

It's probably impossible to name a journalist who worked harder, or longer, to earn her place in the history of the profession than Helen Thomas. The veteran White House correspondent—and opinion columnist, and author, and one-time president of the White House Correspondents' Association—began her career in the 1940s, and continued working until her death on July 20, 2013, just a few weeks shy of her 93rd birthday. Her colleagues report that over the course of covering ten presidential administrations, she did not take vacations. She did not appear to worry about “work-life balance:” She lived to work, married at the age of 51 and had no children. And she was never, ever late, tired or disengaged: For as long as she worked the White House, Helen Thomas was always, famously, the first person to arrive at work and one of the last to leave.

It was a lesson she may have learned in the early days of her career, as a radio news writer during World War II. With so many men either enlisting or being drafted, there was unprecedented opportunity for women to advance in journalism. But for most of them, that opportunity ended when the war did.

“I worked for UPI,” Thomas told VICE Magazine, “and eight women reporters in our office who had been covering the State Department, the Pentagon and so forth, were fired on the basis that these young men that had gone off to war, and usually had a college education, now wanted to come back to their $24-a-week job.”

The only chance for these women, Thomas said, was that the returning men might ask for too much money; thus, some female reporters regained their jobs simply because, being less empowered to negotiate, they were also cheaper. Not so Thomas, who held on to her job through a different expediency: She just happened to work one of the company's least desirable shifts.

And for the rest of her working life, any reporter who shared Helen Thomas's beat, no matter how early he or she arrived on the scene, would find that Thomas had woken up earlier and gotten there first.

Her resume, in fact, is a list of firsts. She was the first woman in the Gridiron Club, the first woman to head the White House Correspondents' Association, and one of the protestors who successfully defied the ban on female journalists attending the White House Correspondents' dinner: She assembled a group of female reporters to tell President Kennedy that, if actual Correspondents weren't allowed to attend, neither should he. She was one of the first women to sit in the White House press room—she worked her way in through her assigned “woman's angle,” which largely meant covering glamorous Jackie—and she was present at the first press conference broadcast to TV. For nearly as long as we've been able to watch the president answer press questions in real time, Thomas has been asking the questions. She seems not to have “cracked” glass ceilings so much as bulldozed through them; she believed that a reporter simply had to be present, to locate herself where the news was happening, and woe befall anyone who thought gender could or should interfere with Helen Thomas getting to work in the morning.

This was actually one of the quieter, more polite demonstrations of the steel that ran through Thomas's character—more sharply manifested by her utter refusal, at all times, to play the polite and accommodating role demanded of her by conventional femininity. As a reporter, Thomas's range ran from “uncompromising” to “combative.” She asked uncomfortable and inconvenient questions, and that was when she liked you. When she didn't, or if she thought you were feeding her a line of bullshit, she could go after you for minutes at a time, interrupting, pushing, contradicting and flat-out refusing to shut up or stand down until she'd gotten the on-record answer she believed the public ought to hear.

This tendency frightened people. George W. Bush, in particular, appeared to regard Thomas as an active threat, moving her to the back row of the room during his press conferences (she had spent decades at the front) and refusing to call upon her for three years. When Bush did finally deign to acknowledge her presence, her very first question went as follows: “Mr. President, your decision to invade Iraq has caused the deaths of thousands of Americans and Iraqis, wounds of Americans and Iraqis for a lifetime. Every reason given, publicly at least, has turned out not to be true. My question is: Why did you really want to go to war?”

One begins to understand why Helen Thomas had enemies. Even her supporters called her “demanding;” her critics called her an “old bag,” a “thespian carbuncle of bile,” and “the embodiment of … everything vitriolic and assertive.” At one point, Bill O'Reilly said that he'd like to “lay her out.” (Although he clarified that he meant shouting, rather than physical violence, the not-implausible specter of O'Reilly decking an octogenarian widow for disagreeing with him continued to linger.)

Not that Thomas minded; trying to shame her into silence was like trying to dissuade a grizzly bear from eating you by handing it a book on table manners. She had the one talent that every woman in the public eye needs, and which most of us never completely acquire: the rare, invaluable gift of being entirely comfortable with other people's anger. All Presidents hated reporters, she'd say; and, at any rate, “we don’t go into journalism to be popular.”

So she not only took her pre-existing enemies more or less in stride, she seemingly never feared to make more. She was as fiercely critical of her fellow White House journalists as she was of their mutual subject, at one point releasing a book that more or less blamed the press for the war in Iraq.

But, although she was fearless about making enemies, she was foolish about defending herself. Thomas approached her targets head-on, with guns blazing, her intentions visible from a mile away; she seems to have assumed that her detractors would do her the same courtesy, and was shocked when they didn't oblige. In one instance, a fan approached Thomas for an autograph, and asked her why she looked sad; she said, off-hand and off-record, that she was covering “the worst president in American history.” That fan turned out to be an aspiring reporter, who promptly published her off-record comment and caused a media controversy.

“I was flattered [by the request for an autograph],” Thomas told Ms. magazine. She added: “I thought I was talking to my new best friend. … Suddenly, I was in the wilderness.”

During and after the Bush administration, there was a massive conservative appetite for a final, fatal takedown of Helen Thomas. Yet Thomas seemed not to get smarter about the ill will aimed at her, ultimately throwing her detractors several tons of red meat when she said (in another off-record comment) that “Jews should get the hell out of Palestine.” Though Thomas had never been shy about criticizing Israel, her comments in this instance were harsh—and she refused to back down from them, spiraling out into a series of bizarre rants about how Zionists controlled everything, which made her appear increasingly paranoid and anti-Semitic.

All of which was a great favor to the conservative commentators and Bush defenders—who are, it hardly needs to be noted, not gleaming bastions of tolerance themselves— who had been attempting to discredit Thomas for years. And a woman who'd spent a decade (at least) telling her fellow journalists that they were doing a shoddy job had no right to be surprised when her own screw-ups became a media sensation. Helen Thomas's 70-year career as a White House reporter ended with Thomas resigning in disgrace.

She kept working. Helen Thomas, the woman who kept her job because she had to wake up earlier than the men, never actually stopped working; she simply transferred her efforts into writing op-ed columns for Hearst, a move she described as liberating.

It's foolish, probably, to attempt a neat summary of a career as long and wide-ranging as Thomas' or to identify the one place where she's been “most” influential. But it seems, to me anyway, that her lasting legacy within journalism lies in two things: First, she was a woman, and a reporter, in an age where female journalists were the exception. Second, she was fierce, blunt, opinionated, more than a little scary at a time when journalism was still pretending to be strictly “objective.” The figure she cut managed to prefigure the role that female op-ed writers, and feminist bloggers of every stripe, are claiming for themselves today. We are all the woman standing up in a hostile room, asking tough questions. What Thomas did—and what her legacy will continue to do—was to show us that having those tough questions, that eternal desire to get truth from power even when it meant being “impolite,” has always been a role that women are capable of playing, and a necessary one.