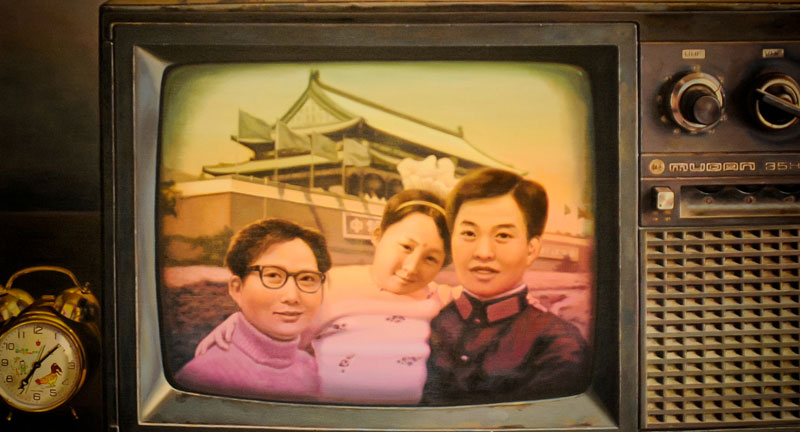 'Better to have only one child,' a painting at the China National Art Museum in Beijing. (Wang Zhao/AFP/Getty Images)

Ma is a visual artist as well as a writer, which may explain his ability to let us see, as well as smell, with horrified belief, the extraordinary world he writes about here and its consequences for one young woman.

China gets a rather kind treatment in the press here these days. There’s nothing like the prospect of trade and economic success to divert our gaze from its atrocities.

Chinese writer Ma Jian provides a corrective. His latest novel, The Dark Road, is about China’s one-child policy. Ma’s books have been banned in China for 25 years, and he lives in London with his partner and translator, Flora Drew, and their four children. All this might suggest a writer so incensed by recent Chinese history that he’d be more likely to produce diatribes than novels. But Ma is a visual artist as well as a writer, which may explain his ability to let us see, as well as smell, with horrified belief, the extraordinary world he writes about here and its consequences for one young woman.

The Yangtze is home to a vast, drifting flotilla of small ramshackle boats and barges, the homes of thousands and thousands of fugitives from the terrifying threat of family planning officers. The river generates its own foul industries—corpse fishing pays well—alongside occasional moments of beauty— “the pale swathe of floating refuse is still glowing faintly.” Dead babies and aborted foetuses float by or are washed on to the banks to rot. The toxic innards of a million discarded computers—shipped to central China from the West—are crunched underfoot for miles around by a gradually poisoned population, which lives by recycling the body parts of a billion laptops.

At the centre of the novel and of this endlessly and multiply polluted landscape, and of the stench and floating hell of detritus flowing through it, are Meili and Kongzi and their small daughter, Nannan. Meili is pregnant again with what her husband hopes is a son and heir to his Confucian ancestry. They leave their village and their families and join the flotilla in order to protect this unborn child. We come to experience Meili’s body as another devastated landscape. She is assaulted from all sides: by her indefatigably priapic husband, by the aborters and sterilisers who tear at her, and by the corruption that dogs her efforts and ambition at every turn, so that, inevitably, she too becomes contaminated, though marvelously undefeated.

She is innocent and knowing. Clever, naturally entrepreneurial, a peasant girl with little schooling, she longs for the things that gleam at her from the media and that she caught a glimpse of on a brief honeymoon visit to Beijing. She is dazzled, rather as the reader is, by the glint and shine of the rubbish that surrounds her. Mountains of plastic bottles and bags can suddenly catch the light and force a sort of gasp from us at their strange beauty. Meili’s dreams of what money might buy her are made up of the same visions of happiness and the same shoddy components. She longs to work, to learn, to grow: for a life where her body and the children it is not allowed to produce are at peace.

Ma has written elsewhere about the journey he made to research the appalling effects of this policy. His own mother had five children, in response, perhaps, to government injunctions at the time to have as many children as possible. Deng Xiaoping introduced the one-child policy in 1978 at the moment when the birthrate was beginning to go down of its own accord, partly because of increased prosperity. It is the arbitrariness of the policy that Ma excoriates, the cruelty it encourages, its barbarous interference with people’s sexual and family lives and, most poignantly in the novel, its violence against women. It is boys that are wanted, so girls grow up hating themselves and boys grow up with a much reduced chance of finding a female partner.

A recent official report proudly announced that 336 million abortions and 196 million sterilisations had been performed under the one-child policy. The rich can sometimes flout the rules by paying fines or going abroad, and there are signs that the government may relax the policy, not for humane reasons but in order to supplement the labour force. And a new—one might think, and hope, unenforceable—law has been introduced: Every one of those single children is required to visit their elderly parents regularly.