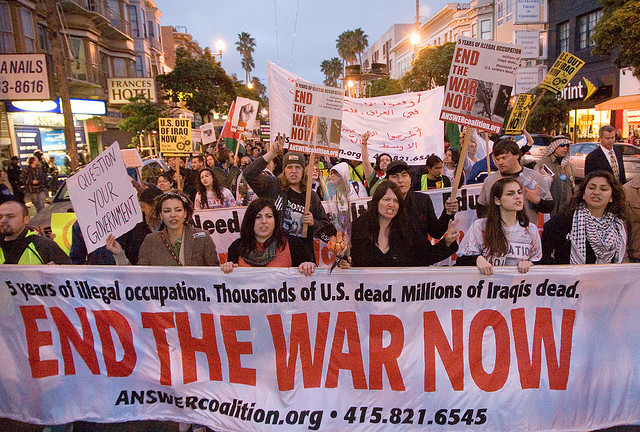 Anti-war protesters march in San Francisco in 2008. (Photo by David Schalliol via Flickr)

What Happened to the Anti-War Movement?

Democratic Congresswoman Eleanor Holmes Norton said a war resolution will pass not because of the supposed merits of an attack on Syria, but simply 'because of loyalty of Democrats' who 'just don't want to see (Obama) shamed and humiliated on the national stage.'

A mere 72 hours after President Obama delivered an encomium honoring the life of Dr. Martin Luther King, he announced his intention to pound yet another country with bombs. The oxymoron last week was noteworthy for how little attention it received. Yes—a president memorialized an anti-war activist who derided the U.S. government as “the greatest purveyor of violence in the world.” Then then that same president quickly proposed yet more violence—this time in Syria.

Among a political press corps that rarely challenges the Washington principle of “kill foreigners first, ask questions later,” almost nobody mentioned the contradiction. Even worse, as Congress now debates whether to launch yet another military campaign in the Middle East, the anti-war movement that Dr. King represented and that so vigorously opposed the last war is largely silent. Sure, there have been a few perfunctory emails from liberal groups, but there seems to be little prospect for mass protest, raising questions about whether an anti-war movement even exists anymore.

So what happened to that movement? The shorter answer is: it was a victim of partisanship.

That's the conclusion that emerges from a recent study by professors at the University of Michigan and Indiana University. Evaluating surveys of more than 5,300 anti-war protestors from 2007 to 2009, the researchers discovered that the many protestors who self-identified as Democrats “withdrew from anti-war protests when the Democratic Party achieved electoral success” in the 2008 presidential election.

Had there been legitimate reason to conclude that Obama's presidency was synonymous with the anti-war cause, this withdrawal might have been understandable. But that's not what happened - the withdrawal occurred even as Obama was escalating the war in Afghanistan and intensifying drone wars in places like Pakistan and Yemen. The researchers thus conclude that during the Bush years, many Democrats were not necessarily motivated to participate in the anti-war movement because they oppose militarism and war—they were instead “motivated to participate by anti-Republican sentiments.”

Not surprisingly, this hyper-partisan outlook and the lack of a more robust anti-war movement explain why political calculations rather than moral questions are at the forefront of the Washington debate over a war with Syria.

In that Beltway back and forth, the national media has focused as much on the horserace (will an attack politically weaken the president?) and political tactics (should the president have submitted to a congressional vote?) than on whether an attack would actually make things better in Syria. Similarly, a top Democratic strategist told CNN that potential Republican opposition to a Syria attack “will coalesce Democrats around the president” in support of a military strike. Confirming that dynamic, Democratic Congresswoman Eleanor Holmes Norton said a war resolution will pass not because of the supposed merits of an attack on Syria, but simply “because of loyalty of Democrats” who “just don't want to see (Obama) shamed and humiliated on the national stage.”

This is red-versus-blue tribalism in its most murderous form. It suggests that the party affiliation of a particular president should determine whether or not we want that president to kill other human beings. It further suggests that we should all look at war not as a life-and-death issue, but instead as a sporting event in which we blindly root for a preferred political team.