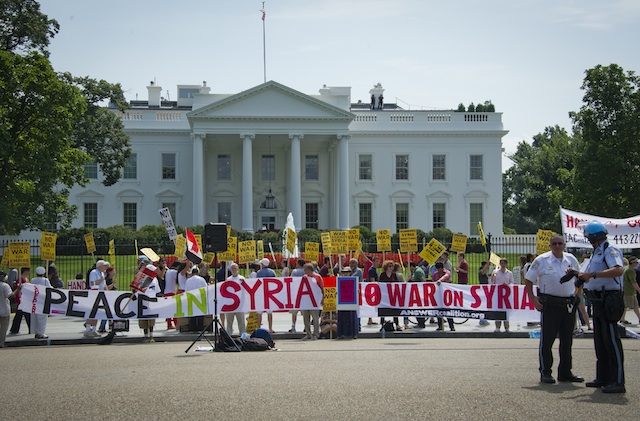 It's not just the hippies anymore—widespread opposition to military action in Syria may be a sign that Americans are just plain sick of war. (Mladen Antonov / Getty)

A decade of protests paved the way for Americans to say ‘no’ to Syrian strikes.

This moment of popular resistance to the military option as the only option shows that what we do does make a difference. Not immediately. Not obviously. Not in a straight line.

Who knew there was a wide and deep anti-war consensus in the United States?!
Apparently not the president, who appears blindsided by the growing opposition to U.S. military attacks on Syria, nor the always hawkish Sens. McCain and Graham, who speak for the aging national security elite, nor the New York Times, which flacked for a violent strike on the first day of Obama’s war announcement but made an about-face the next day, running a devastating front-page photo of “rebel” forces executing their trussed, face-down young prisoners point-blank.
Indeed there is a freshly expansive, growing, tidal wave of sentiment that permanent war is neither in the interest of the American people nor the global community. It’s become evident to large sectors of the population that the long war of occupation in Afghanistan, now sputtering toward withdrawal of foreign troops, is a total disaster; the invasion and occupation of Iraq—based on fraudulent evidence—is a complete failure; the military rush to interfere in Libya will have blowback across Africa for decades; and U.S. military interventions and drone strikes in Pakistan, Yemen, Mali, Bahrain and Afghanistan continue to result in bitterness, widespread deaths, displacement, corruption and tyranny. People do not believe official promises that US military action will be either “surgical” or limited. They do believe that U.S. military attacks in Syria will surely lead to civilian deaths.
These are terrific victories for peace and social justice activists, and they are the fruit of years of work. Iraqi and Afghan veterans have agonizingly educated the American people about the harsh realities of war and return. The 50th anniversary of the March on Washington threw into sharp relief the linkages between war, poverty and injustice first identified by the Black Freedom Movement. As Dr. King put it, “The greatest purveyor of violence in the world today [is] my own government.” He continued, “I am convinced that if we are to get on the right side of the world revolution, we as a nation must undergo a radical revolution of values. We must rapidly begin to shift from a 'thing-oriented' society to a 'person-oriented' society. When machines and computers, profit motives and property rights are considered more important than people, the giant triplets of racism, materialism and militarism are incapable of being conquered.”
Nor could the sea change in public sentiment have come about without the tens of thousands of small demonstrations by peace and justice activists, the anti-war contributions of musicians, playwrights, filmmakers and comedians, and the imagination and persistence of CodePink. It is clear, too, that the large and determined opposition to the 2012 NATO summit in Chicago—although forced to demonstrate inside a massive police occupation of an emptied and barricaded city at an enormous cost to taxpayers—educated the public and served notice that global military meetings would not be welcome in urban North America. Official talk about NATO has been muted in the current run-up to war. And the recent revelations about domestic and global spying have aroused resistance and diminished U.S. and corporate credibility.
Resistance to military recruitment in high schools across the country has made a difference as well. And a number of progressive struggles—for immigrant rights, for quality public education, for living wage jobs, for ending reliance on fossil fuels, for racial justice, for ending the carceral state, for dignity and equal rights, and for healthy food and safe water—have raised consciousness about how the furnaces of permanent war abroad and the national security state at home are usurping resources for basic human needs. People are increasingly saying, “Enough!”
This moment of popular resistance to the military option as the only option shows that what we do does make a difference. Not immediately. Not obviously. Not in a straight line.
Greater moral imagination is required to create alternatives to missiles, drones, arial assaults and devastation. During the hundred days of the Rwandan genocide, U.N. General Dallaire noted that the world community could have saved lives and manifested its outrage by jamming Radio Rwanda’s airwaves to disrupt the continuous directions of who to kill. That would have been a non-violent, partial disruption of war crimes. But US military intervention and humanism almost never go hand-in-hand, no matter how passionate the “moral” rhetoric. It seems that great sectors of the US population has learned this, at a terrible costs to the people whose countries and lives have been ravaged.
But the people’s resistance to endless war, right here in the heart of empire, shows that our efforts toward peace and justice can take root.
Amilcar Cabral wrote: “Claim no easy victories.” But also consider: Manifesting resistance to war and injustice creates waves and subverts what was once the the taken-for-granted.

Bernardine Dohrn is a social justice activist, children's rights and international human rights law professor, writer and speaker. She lives in Chicago and has three sons and three grandchildren.