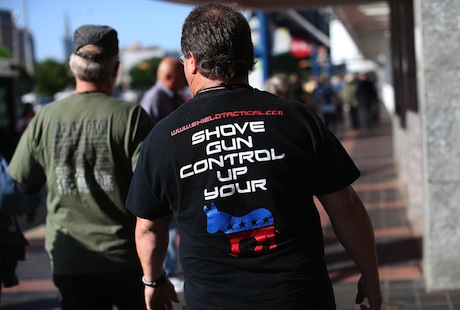 The 2013 NRA meeting in Houston set the tone for a full-blown culture war in western states like Colorado this year. (Justin Sullivan / Getty)

The False Logic of ‘Gun Freedom’

The real lessons of the NRA’s victory in Colorado.

Inevitably, the gun lobby will now claim the Colorado elections prove that politicians should back off even minimal gun regulations. But the elections say the opposite—they say that if the gun lobby is going to continue turning a policy debate into a cultural one, then an equally powerful cultural argument needs to be made in response.

The day after this week's elections, the National Rifle Association got exactly what it wanted: a front-page New York Times story about Colorado results that supposedly send “lawmakers across the country a warning about the political risks of voting for tougher gun laws.” That article, and many others like it, came after the gun lobby mounted successful recall campaigns against two state legislators who, in the wake of mass shootings, voted for universal background checks, limits on the capacity of bullet magazines and restrictions on domestic abusers owning firearms.
Despite the recalls being anomalously low-turnout affairs, the national media helped the gun lobby deliver a frightening message to politicians: Vote for modest gun control and face political death.
For all that reductionism, though, there are more nuanced lessons from these elections.
First and foremost, with statewide polls showing that most Coloradans support modest gun control and opposed the recall campaigns, the elections prove that in low-turnout situations, a relatively small group of pro-gun voters can still win the day.
Additionally, with gun extremists issuing threats of violence against pro-gun-control legislators, Colorado Democrats stopped explaining why their gun legislation was so necessary. In light of that, the election results are a reminder that when politicians don't stay on the message offensive, they quickly find themselves on the electoral defensive. This is especially the case when, as a Pew survey documented, voters who oppose gun control tend to be more motivated single-issue voters than those who support gun control.
That intensity gap, of course, is the most significant story of the Colorado elections because it reveals how different people ascribe different meanings to the gun debate.
To most of us, the political discourse about firearms is about policies that attempt to strike a balance between liberty and safety. But the visceral reaction to gun control by firearm advocates suggest they see the same discourse as less about policy than about culture. In that view, the gun is an all-encompassing symbol of larger attitudes, lifestyles and geographies. Consequently, modest proposals to regulate guns are viewed as assaults on an entire way of life.
Simply comparing the gun control initiatives with the anti-gun-control rhetoric illustrates this dynamic.
Nobody can honestly argue that background checks, magazine limits and restrictions on domestic abusers diminish most citizens' ability to defend themselves. Likewise, nobody can honestly argue such policies are an indiscriminate effort to confiscate all guns.
Yet, that's exactly what is argued by gun advocates in campaign mailers and in conservative media. And even though such arguments are patently absurd, they can succeed because they aren't about substance. Instead, they are designed to generate resentment against a perceived cultural affront.
Inevitably, the gun lobby will now claim the Colorado elections prove that politicians should back off even minimal gun regulations. But the elections say the opposite—they say that if the gun lobby is going to continue turning a policy debate into a cultural one, then an equally powerful cultural argument needs to be made in response.
If, for example, the gun lobby wrongly declares that pro-gun-control politicians are fully eliminating gun rights, then those politicians must not merely show that such assertions are inaccurate. They must also show that the gun lobby's agenda is eliminating too many lives.
If the gun lobby dishonestly claims that those politicians are taking away the freedom to own guns, then those politicians must argue that the gun lobby is taking away others' freedom from guns.
In short, if the gun lobby is going to keep using demagoguery to prevent a constructive discussion, then that demagoguery must be combatted with an appeal to another way of life—one in which the gun is no longer unquestioningly worshiped as a holy talisman.