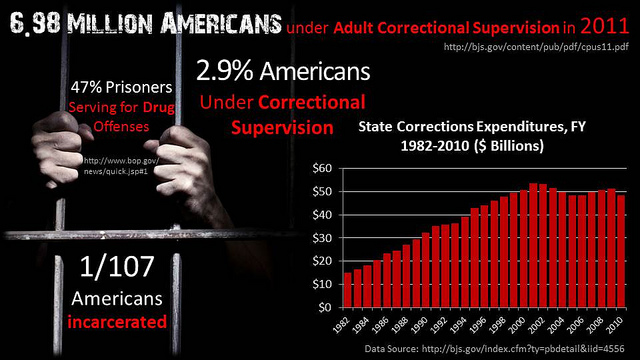 The Biggest Threat to the Black Vote

The best way to defend African-American voting rights is to end the War on Drugs.

Progressives could tip the scales. An important source of energy and inspiration is the army of grassroots and legal organizations that blocked, diluted, repealed or postponed anti-voter laws in 14 states during 2012.

Suppression of the black vote has been a flashpoint since June, when the U.S. Supreme Court struck down a key section of the 1965 Voting Rights Act. The decision opened the door for historically racist regions (mostly in the South) to pass anti-voter laws such as ID requirements that disproportionately disenfranchise Black, Latino and poor people—who happen to overwhelmingly vote Democratic. The GOP is happily charging ahead.

But a robust counteroffensive is underway, buoyed by the 50th anniversary of the March on Washington. Speakers such as presidents Barack Obama, Bill Clinton and Jimmy Carter marked the occasion by highlighting voter suppression as a serious challenge facing minorities. Meanwhile, legal challenges by the Justice Department and pressure from civil rights and grassroots groups have forced a break within GOP ranks. Rep. Jim Sensenbrenner (R.-Wis.) challenged his party to join him in restoring the Voting Rights Act, which he calls “an effective tool to prevent discrimination.” This focus on stopping anti-voter bills, though laudable, should not obscure the struggle to address a more insidious instrument of voter suppression. With the exception of Maine and Vermont, all states disenfranchise felons for some time during or after incarceration. Because a disproportionate number of felons are African-American, who are more likely to vote Democratic, this has a real impact on electoral outcomes. In 2000 in Florida, had the 600,000 former felons who were ineligible to vote been able to, they could have swung the election to Al Gore.

The cause of prison reduction—and, by extension, voting rights protection—has received a boost from Attorney General Eric Holder, who on August 12 proposed major policy changes in federal drug sentencing and enforcement. Two weeks later, he announced that marijuana legalization in Colorado and Washington would be allowed to go into effect.

A number of eminent conservatives, from Mike Huckabee to Newt Gingrich to Jeb Bush, have joined the call for saner sentencing guidlines, but not without stiff resistance from within. On Fox News, the perpetually irate Bill O'Reilly barked, “Holder is just wrong!” then insisted that “draconian measures” reduce crime rates. Clearly, some Republicans are frightened that reducing incarceration will jeopardize the removal of undesirable (i.e., Democratic-leaning) voters from rolls. Republicans in North Carolina have just reversed a law that granted voting rights to ex-felons upon completion of parole.

Progressives could tip the scales. An important source of energy and inspiration is the army of grassroots and legal organizations that blocked, diluted, repealed or postponed anti-voter laws in 14 states during 2012. Another model of creative action is North Carolina's “Moral Mondays.” The weekly rallies and civil disobedience at the seat of state power brought national focus to the state's nefarious voter suppression laws and helped lower Gov. Pat McCroy's approval ratings from 48 to 39 percent.

Democrats must start championing restoration of voting rights for ex-felons and talk more comprehensively about crime. What Holder did is only a first step. The party must work to jettison once and for all the bogus linkage between the right to vote—our ultimate emblem of citizenship—and a damn prison record.