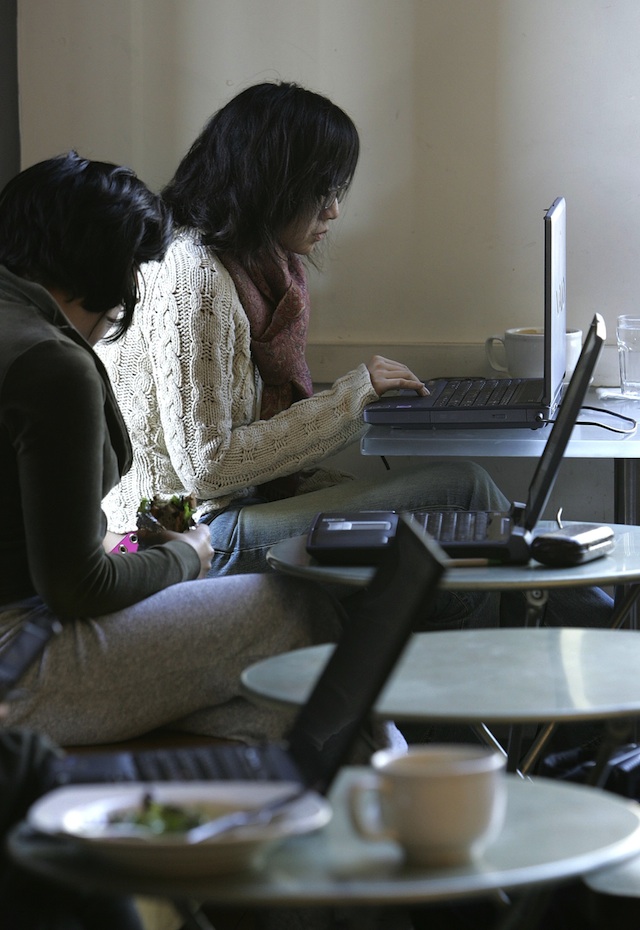 Two women surf the web at a café in San Francisco. An upcoming court case, Verizon v. FCC, could dramatically change the way we access the internet. (Justin Sullivan / Getty)

Your Internet’s in Danger

Critics say that if the court sides with Verizon, it could ultimately enable the construction of a multi-tiered Internet landscape resembling something like cable television—where wealthy conglomerates have access to a mass consumer base and other providers, such as independent media, struggle to reach an audience.

A major court case pitting Verizon against the Federal Communications Commission (FCC) could determine the future of Internet access in 21st-century America.

Though it’s uncertain how exactly the results of the case could emerge in the context of everyday Internet use, the stakes of Verizon v. FCC, which opened at the U.S. Court of Appeals for the D.C. Circuit earlier this month, are monumental. “Until now, the Internet has been transformative because nobody has had to pay to get online in order to be heard,” Jennifer Yeh, policy counsel at the media reform group Free Press, told reporters in a conference call about the the case. Critics say that if the court sides with Verizon, it could ultimately enable the construction of a multi-tiered Internet landscape resembling something like cable television—where wealthy conglomerates have access to a mass consumer base and other providers, such as independent media, struggle to reach an audience.

Under the current order, which Verizon is challenging, the FCC has the right to bar Internet service providers (ISPs) from charging different prices to users based on what sites they access or to websites who might be willing to pay extra in order to offer faster speeds than their competitors.

By contrast, the ISPs want the authority to control Internet access on their own terms—to block or slow content as they please and to charge what they want.

Advocates for an open Internet are concerned that the way the FCC has historically classified ISPs could also serve to undermine the agency’s legal case against Verizon. The FCC does not subject Internet providers to the same “common carrier” rules that other telecom companies are bound by. For instance, telephone companies have to offer everyone equal and unrestricted access to their networks—they can’t choose to connect certain calls over others, or to block specific people from using their networks. As of now, ISPs are not subject to those same “common carrier” regulations: If the court decides to overturn the Open Internet Order, the FCC will have no way to enforce unbiased data access.

Meanwhile, Verizon’s argument is based on free speech protections; it claims that it reserves the right to prioritize and promote the kind of content it sees fit. In its legal brief, the company contends, “Broadband networks are the modern-day microphone by which their owners [e.g. providers like Verizon] engage in First Amendment speech.”

Net neutrality supporters, however, feel that increasing ISP content management privileges would do far more to restrict free speech than promote it.

Amalia Deloney, grassroots policy director at the Center for Media Justice, points out that the Internet is a critical medium for public discourse. Subjecting that forum of dissent to corporate oversight, she says, would cut back debate and even jeopardize organizing efforts. The ultimate fear seems to be that companies could make certain websites prohibitively slow to load, effectively restricting discussions among would-be activists.

It would also set an alarming precedent for other major Internet service providers, she says.

“I think the real challenge is that … anything that gives Verizon more power in this particular case sends a signal to the rest of the corporations that this communications technology is really a playground where they get to control the rules. And that’s just wrong. We’re talking about a communications infrastructure that is absolutely essential to 21st century life,” Deloney says, referring to broadband Internet. “We can’t have a pay-to-play rule; it can’t be corporations that are dictating the terms of engagement.”

She continues, “It can’t be corporations that are determining who gets access [to the Internet] and in what way, based on what impacts their bottom line or helps their stock portfolio the most.”

This story was produced as part of the Media Consortium's Media Policy Reporting and Education Project, thanks to a generous grant from the Media Democracy Fund.