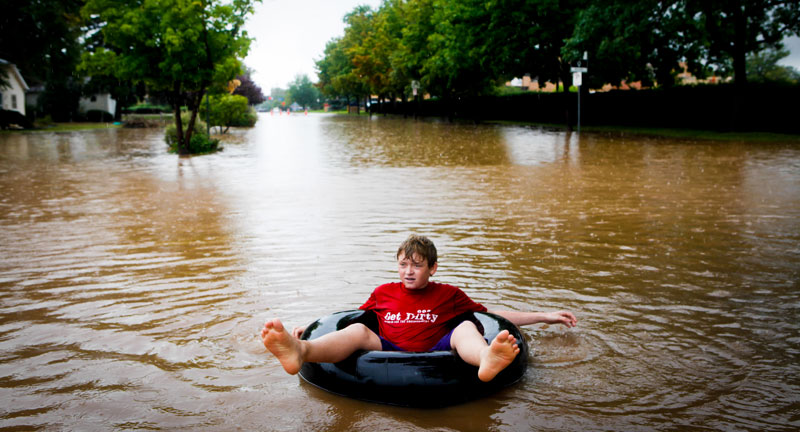 Corporate interests and environmentalists face off in a Boulder, Colo. vote over ecofriendly public energy.

Roads are crumbling, homes are in ruin, bridges are impassable and more than 22,000 gallons of crude oil have spilled out of damaged tanks into the floodplain of the South Platte River valley in the wake of catastrophic flooding in Colorado in September.

For Coloradans, the effects of climate change are no longer a distant prospect. While progress toward stemming the tide of climate change seems to have stalled at the national level, folks in Boulder are taking matters into their own hands by trying to reclaim control of their energy production. A crucial vote on November ballots will determine whether Boulder becomes a blueprint for grassroots movements across the country in the fight against climate change.

In 2002, voters in Boulder set the ambitious goal of cutting their greenhouse gas emissions to 7 percent below 1990 levels by 2012. But to get serious about meeting this goal, Boulder needed to address the carbon footprint left by dirty coal. It’s the most carbon-intensive mode of energy production, and it’s how more than 60 percent of Boulder’s energy is produced. So in 2002, a coalition of scientists, academics and ordinary citizens began working on a plan to make Boulder energy self-sufficient.

In 2011, voters approved a plan for the city to sever ties with its current energy provider, Xcel, and create a new municipal utility—or “muni”—based on local, renewable sources. If its rates and reliability were at least equal to those of Xcel, the city could be its own energy provider. (Xcel is an investor-owned electric utility that has an unregulated monopoly in some Western states.)

About 2,000 public munis already exist in the U.S., some 29 in Colorado. But Boulder is heading into uncharted waters by citing environmental concerns as the sole impetus for its move. A working group developed detailed models showing how Boulder’s carbon emissions attributable to electricity could be cut by more than half by 2017 by using regional wind, solar and hydro options. The modeling also suggests that the muni could actually produce energy at a lower cost, given the rising cost of fossil fuels and recent innovations in renewable energy production.

Of course, Xcel has no interest in giving up its distribution infrastructure—that is, the poles, wires, substations and meters needed to transmit electricity into people’s homes. So to reclaim its power grid, Boulder is turning to eminent domain. Normally, such a transaction would be facilitated by a judge in condemnation proceedings. The city would offer a price, Xcel would counter, and they would settle on something in the middle.

But last spring, a group calling itself Voter Approval of Debt Limits began petitioning for a citizens’ initiative charter amendment to appear on ballots in November. The measure, if passed, would create a catch-22 by requiring voters to approve a specific debt limit for creating the muni before the city can enter condemnation—an amount that can only be determined by condemnation. The measure also requires affected non-city residents of Boulder County to vote in city elections, which is currently illegal under state law.

In response to Xcel’s amendment, Boulder’s City Council drew up its own measure as an alternative. It would establish a $214 million debt limit, which is projected to be more than sufficient to cover the cost of acquiring Xcel’s infrastructure.

The pro-muni campaign is being driven by Empower Our Future (EOF), a coalition of nonprofits and environmental groups, including Bill McKibben’s 350.org and the Sierra Club, which has donated $25,000 to EOF. New Era Colorado, a feisty local nonprofit, launched a crowdsourcing effort that raised more than $190,000 for the campaign, but as field organizer Becca Moser put it, “Sure, we’ll have a couple glossy mailers, but we know neighbor-to-neighbor, honest conversations are the only way to win this.”

In late September, Xcel donated $300,000 directly to Voters For Approval of Debt Limits in a move “to even the playing field,” as the group’s spokeswoman Katy Atkinson put it. So the battle lines are drawn. With the burn scars left by record-breaking wildfires of recent summers still visible in Colorado, the stakes of the muni project are clear-cut. But if other communities catch on that different ways of doing things are possible, Boulder might ignite a blaze of its own.

Nat Stein was a Fall 2013 Intern. She is currently a junior at Colorado College where she studies Philosophy and Journalism, with a minor in skiing and beer. Don't follow her on Twitter.